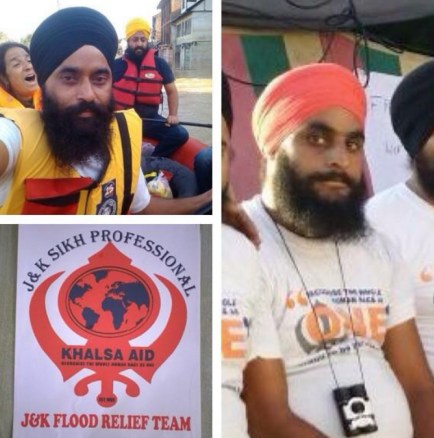 SRINAGAR, KASHMIR - Hundreds of flood-victims in Jammu and Kashmir who found shelter at various gurdwaras across the the state are grateful to the Sikh community for their contribution in the rescue efforts.

Abdul Rasheed has been staying in Gurudwara Shaheed Bunga for past 17 days ever since he along with his family was rescued from his marooned house in Jawahar Nagar here. "Floodwater did not spare any community, everybody was equally affected, but we are thankful to the members of the Sikh community" he said.

Expressing gratitude towards the Sikh community, the flood victims, of whom a majority were Muslims, said they would remain indebted to the community as they helped them without discriminating on the basis of religion. "I had never been to Gurudwara before and I am overwhelmed to see the love and care these people gave us.

Without being bothered about our religion, they allowed us to live inside the main hall of the gurudwara," Maqsood Ahmed, a resident of Bemina locality, said. Besides setting up relief camps at gurdwaras, several members of Sikh community also volunteered in rescue efforts.

"A sardarji used his turban to pull my drowning family out. We owe our life to him, he even used the turban cloth to stop the bleeding of my daughter's wounds," Shabeer Ahmed another resident of Jawahar Nagar, said. Various Sikh organisations from across the country and the globe too have extended help for the relief and rehabilitation of the flood affected residents.

"UK-based Khalsa Aid and US-based United Sikhs were among the first few charitable organisations which rushed their men and equipment to carry out the relief work in the Valley," a government official said.

JAMMU TAWI - Reaching out to the flood torn people of Jammu, a team of Jammu Kashmir Sikh Professionals (JKSP) under the aegis of Khalsa Aid (UK) today paid a visit to Nowshera, wherein they took stock of the damage and met suffering people.

During the course of the visit volunteers of JKSP and Khalsa aid also visited flood victims of border areas and estimated loss suffered by already poor people. "Our teams visited Noushera and adjoining areas to take stock of the situation to know the exact quantum of damage occurred due to recent floods that wreaked havoc in the border areas in Jammu as well as Kashmir valley," said Ranjit Singh, a member of JKSP.

He said that after talking to various flood victims, they came to know that huge loss has been incurred by the people. "We witnessed that besides huge loss of movable and other property, several structures were also damaged, which need immediate reconstruction," said Ranjit Singh.

JKSP and Khalsa Aid volunteers further gave assurance to the victims of all possible help. "Our volunteers promised flood victims at Noushera and adjoining areas of reconstruction of houses at priority," he said adding till now some eight houses have been identified, which need immediate relief for restoration.