BHAI MANI SINGH JI SHAHEED - THE STORY OF HIS MARTYRDOM 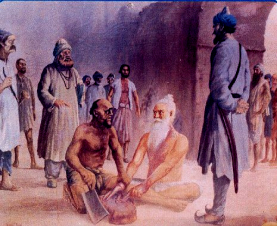 Bhai Mani Singh was the Head Granthi of Sri Darbaar Sahib, Amritsar. Mata Jeeto Ji (short for Ajeet Kaur, also known as Mata Sundri Ji), the wife of Guru Gobind Singh Ji requested Bhai Mani Singh to sort out the disputes amongst the different Sikh groups, which had formed, and unite the Sikh nation as one. Bhai Mani Singh Ji planned to use Bandi Chhor Divas, Diwali, as an opportunity to unite the Khalsa together at Sri Harimandar Sahib.


Permission was sought from the Mughal authorities to allow the big gathering on Diwali. The Governor of Panjab, Zakhriya Khan accepted the plea in return of 5000 gold coins worth of tax. Bhai Mani Singh Ji accepted and sent letters out to the Sikhs across Panjab that all Sikhs will unite on Diwali day at
Amritsar.


However, the Mughals were cunning and they planned to attack the Sikhs and kill all the young Sikh men when they gathered at Amritsar. With the blessings of Waheguru, an informant informed Bhai Mani Singh of the Mughal plans. Bhai Mani Singh Ji was angered at the betrayal of Zakhriya Khan. He resent letters out to the Sikhs across Panjab, telling them not to come to Amritsar on Diwali and that the gathering of the all the Khalsa has been cancelled.

Listening, Zakhriya Khan became enraged and said, “Oh Mani Singh, open your eyes and see, you are that this moment not walking in the parkarmaa of Harimandar, where you shout these slogans! You are now in Lahore, in Zakhriya Khan’s court, where the air says, “Allah is great, Allah is great”, where do you get the nerve to say your Sikh slogans? Bhai Mani Singh said with might and power, “you haven’t met a fox today, you have today met a lion of Guru Gobind Singh Ji!”

Zakhriya Khan contained his anger and said, “Oh old man, you are no longer young. If you convert into my religion, then I will convert the remainder of your life into happiness and pleasure. I will give you many wives, I will give you land and will give you a throne to sit on. Oh Mani Singh, what is the difference, before you read Gurbaani and now can you read the Qur’an. Before you used to say ‘Waheguru’, now you can say ‘Allah is Great’. What is the difference in this?”

“Oh Zakhriya Khan, remember, in the religion we were born, in that religion we will breath our last breaths. You say you know the stories about the Sikhs. Do you know that Guru Nanak Ji planted the flower of Sikhi and that even a storm cannot uproot that flower. Not even a storm! It is that type of flower which is does not bend down but instead breaks,” said Bhai Mani Singh Ji.

Shakespeare says: “Those who face the storm they stay, those who bend they break.”

Zakhriya Khan replied to Bhai Mani Singh Ji, “Your talk is very big Mani Singh. Remember, I will give you that type of torture; I will decree that type of fatwaa, legal decree, that you will shake and tremble.

With a smile one his face, Bhai Mani Singh Ji answered back, “The land can shake, the sky can tremble, but a Sikh of Guru Nanak Ji cannot tremble or shake. Sikhi is that religion, whose fifth Guru, Guru Arjan Dev Ji sat on a hot plate and faced tortures. It is that religion, that in order to keep it alive, children aged 5 and 7 years old gave up their lives but not their religion. Remember Zakhriya, I will die for my religion, but will not do what you say.”

The next day, Zakhriya Khan called the Qazi. “Oh Qazi, from your book of Shari’a Law, I want you declare a fatwaa (legal judgement), such a fatwaa that the whole earth and sky will tremble,” said Zakhriya Khan. The Qazi opened the Book of Shari’a and announced the fatwaa: “May this Kaafir (Infidel) be cut piece by piece, limb by limb.”

Listening, Bhai Mani Singh started to stump his foot into the ground in frustration. Zakhriya was standing by and said, “Oh Mani Singh, you got scared? You seemed be getting frustrated. We have only made you listen to the fatwaa, we have yet to cut you limb by limb.”

Staring into Zakhriya Khan’s eyes, Bhai Mani Singh said, “Oh Zakhriya Khan I am not scared. I am frustrated with my Guru, Guru Gobind Singh Ji.” He replied, “Obviously you were going to get frustrated with your Guru! What have you got out of your Guru’s Sikhi? Having a fatwaa of being cut limb by limb. You still have time to convert to Islam.”

Bhai Mani Singh answered back, “This is not the case. I am frustrated with my Guru because when I left Amritsar, I did an Ardaas. “Oh King and Master, may each hair on my body be accepted for GurSikhi.” But instead why have my limbs only been accepted and not each hair on my body. What shortage (kammee) was there in my Ardaas?”

The executioner makes his mark on Bhai Mani Singh’s fingers. Bhai Mani Singh Ji pulls away his hand. “Mani Singh, you got scared! Before you were talking so much, yet this is the first cut. You couldn’t even handle the first cut, yet we are going to cut you limb by limb, your whole body,” said Zakhriya Khan.

Bhai Mani Singh Ji replied back, “Oh executioner, what were your orders? You were ordered to cut me piece by piece. You have left all my fingers. Zakhriya Khan, ensure your servant doesn’t disrespect your orders and I will not disrespect my Father, Guru Gobind Singh Ji Paatshaah’s orders.

Saying ‘Satnaam Waheguru’ Bhai Mani Singh Ji’s fingers, wrist, elbows, shoulder, toes and knees were all chopped on the wooden block. There was a pool of blood. The body lay severed into pieces. No arms, no legs. “myrw isr jwvy qW jwvy, pr myrI is`KI isdk nw jwvy[ Mera Sir Jaava Taa Jaava Par Meri Sikhi Sidq naa java… If my head goes then so be it, but may I never give up my Sikh faith.”

Be inspired and inspire others. May Waheguru bless you.