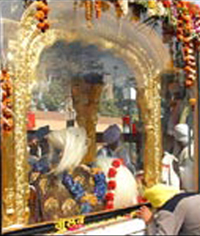 Nankana Sahib (KP) -- The Rath Yatra ("chariot pilgrimage"), with its procession of a golden palki (palanquin) and dubious cast of characters, arrived Tuesday not unlike the huge wooden horse that entered the city of Troy to destroy it. The horse was secretly filled with troops in the guise of an offering to the greek god Poseidon. Like the Trojan horse, the intentions behind the face of this ‘grand procession’ are loaded with deception, greed, and ill-will. It is hoped that through this clarion call, the Khalsa Panth will be stimulated to aggressively retake affairs that have no business being in the hands of those who would try to destroy the Khalsa Panth at its roots and shamelessly financially profit from the Gurus’ legacy.

Beneath all of the fanfare surrounding the rath yatra to Nankana Sahib, the birthplace of Guru Nanak Dev Jee, the Sikh sangat has uncovered a sinister plot executed by those who have unsavory ulterior motives towards the Khalsa Panth. The plot includes a cast of government and Gurdwara officials, those who wish to absorb Sikhi into the Hindu fold, businesspersons whose main goal is to make a quick profit by using Sikhi, and those anti-Sikh Cults, who under the guise of Sikhi, are leading innocent Sikhs astray. Panthic Weekly will expose the nefarious deeds of the players in this charade.

It would be central to this story to mention the name of Parmjit Singh Sarna here, who is the head of the Delhi Sikh Gurdwara Management Committee (DSGMC). All those who wished to partake in the procession and obtain visas to visit Nankana Sahib, Pakistan, had to go through this individual. He alone was responsible for arranging the processing of visa applications for those communal groups whose main goal is the total annihilation of the Sikh way of life.

It should be noted that while the ‘average’ Sikhs are being denied visas, and are therefore unable to visit Pakistan, anti-Sikh forces are having no trouble with the process thanks to Mr. Sarna. Along with the preferential treatment of easily obtainable visas, he has been offering all the luxuries that the DSGMC has available. Another important point regarding this individual is that he has several cases pending against him at Sri Akal Takhat Sahib--one of these cases being the affair of Bhanoo Murti who did beadbi (disrespect) of Gurbani. 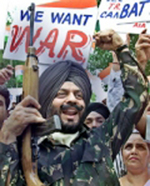 When this “rath yatra” started in Delhi and wound its way through East Punjab to the Wagah border, many MLA’s (Members of the Legislative Assembly) and other government officials welcomed it along GT road. One, whose name startles alarm in Sikhs, is Madan Lal Khurana, who joined the procession as it neared the Wagah border. It is disturbing to note that Mr. Khurana is a BJP and RSS (right wing Hindu terrorist groups) heavyweight. One wonders why this man would take so much interest in this rath yatra (palki procession), a so-called Sikh event!

Maninderjit Bitta, another anti-Panthic stooge and head of the All India Anti-terrorist Front, also welcomed the rath yatra with open arms. His group plastered GT Road with posters of Bitta and banners welcoming the ‘procession’ and its leaders.

The participation of various anti-Sikh Cults, many of whom have Hukamnamas from Sri Akal Takhat Sahib issued against them, in this rath yatra has created alarm amongst the Sikh intelligentsia. These sects, which took part in the drama of welcoming this ‘procession’, included the Naamdharis, Neel Panthis, and the Darshan Dassis. Tarlochan Das, the son of Darshan Das (who was killed in 1987), is the current “guru” of the Darshan Das sect. Ghassita Ram, Tarlochan Dass’ envoy, and his numerous followers, welcomed the rath yatra from Delhi to Ambala. In the city of Ludhiana, the Naamdhari cult, who also worship a fake living “guru”, welcomed the rath yatra in full force.

It is well known that these groups are created and funded by forces whose only goal and intention is the corruption and destruction of the Sikh faith and Sikh history.

Panthic Weekly has exclusive photos evidencing the participation of these anti-Panthic groups in the yatra. 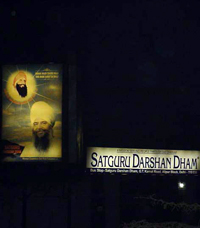 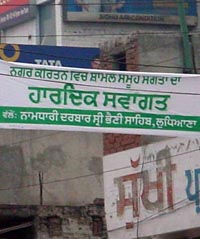 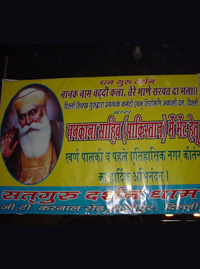 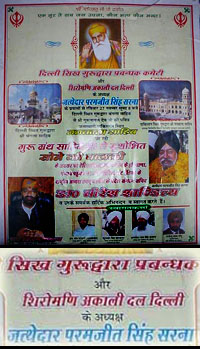 The yatra was largely advertised in Hindi by the Congress Party


Rulda Singh, the current head of this communal organization that is bent on destroying the roots of Sikhi, and his wife, were given a special air-conditioned room by Sarna and party at Rakab Ganj Gurdwara Sahib, where they stayed overnight. His purpose of staying at this Gurdwara truly unveils the sinister plot, already set in motion. Rulda Singh came to Gurdwara Rakab Ganjh Sahib to not only apply for Pakistan visas for himself and his wife, but for at least 46 other suspicious individuals belonging to the RSS. Out of the 46 applicants, 5 were rejected because their passports were not submitted on time. The 41 approved participants are accompanying Rulda and Sarna to Nankana Sahib, Pakistan.

The majority of Sikhi-related audio tapes, CDs, and DVDs sold in India carry the T-Series label. The owner of this company is a person by the name of Gulshan Kumar. Darshan Kumar, the brother of Gulshan, along with an industrialist from Noida by the name of Chawla, donated the 7 million rupees used to build the golden palki. In return, T-Series has the exclusive contract for recording this entire fiasco. This seems to be a great business deal for T-Series, as the investment of 7 million rupees will give them a return of at least Rs. 500 Million from the sale of millions of DVDs.

From the very beginning, the ‘palki procession’ has been marred by controversy. Originally, the golden palki was to be taken empty to Nankana Sahib, Pakistan. At the very last minute, Mr. Sarna and party decided to do Parkash of Sri Guru Granth Sahib Ji on the palki whilst taking it to Nankana Sahib. It is obvious that Parmjit Singh Sarna and party have no understanding or respect of the Sikh Rehat Maryada, the Sikh code of conduct. If they had even minute knowledge on the subject, they would know that parkash of Sri Guru Granth Sahib Ji is not done on a palki but rather on a Manji or Takhat Sahib.

An additional arrangement, which Sarna’s party wished to carry out, was the replacement of the current and original marble Takhat Sahib at Nanakana Sahib with the golden palki. Due to the alertness and huge outcry of the Sikh sangat, this plan was foiled. It needs to be noted these types of ‘changes’ by SGPC and DSGMC Kar Sewa have completely ruined the face of our historical Gurdwaras in Punjab—and in effect, our architectural history. It now seems as if the same is being attempted at historical Gurdwaras in Pakistan, which so far have been preserved intact by the Pakistan Sikh Gurdwara Parbandhak Committee. One has to wonder as to where Mr. Sarna obtained the permission to replace the original marble takhat with a golden palki!

Parmjit Sarna’s elaborate scheme of transporting the golden palki, in a rath yatra, is nothing more than a way for him and his supporters, the RSS, and T-Series to gain prominence, make inroads of destruction into the unscathed Gurdwaras in Pakistan, and amass riches. Once a foothold is established there by these rascals, the propaganda, anti-Sikhi parchar, and meddling at multiple political levels will follow. All this is being done at the expense of the Sikh sangat. We bring to the attention of our readers that over 5 million rupees of the Sangat’s money has been wasted en route from Delhi to the Wagah border on accommodations, food, other necessities and expensive niceties for these corrupt political leaders, the RSS, and those whose only objective is financial gain at the expense the faith of the Sangat. Another surprising revelation is that the average sangat member was not allowed to participate in the procession, due to the presence of nearly 10,000 plus uniformed officers stationed along the Grand Trunk Road. Those accompanying the rath yatra consisted of the previously mentioned personalities traveling in government vehicles with special red emergency sirens. Panthic Weekly asks, who is the overall sponsor of this event in the big picture? With government vehicles and excessive police presence?

Commenting on the pillaging of the Sangat’s money, Jathedar Bhai Sahib Bhai Ranjeet Singh Ji, said, “It is shameful that Sarna has resorted to the same deeds which Badal and Bibi [Jagir Kaur] are doing, such people are answerable to the sangat for misusing golak donations for self promotion.”

Mr. Sarna has also given Hindu terror organizations, such as the RSS, an opportunity to make inroads into Pakistan Gurdwaras. These Gurdwaras, due to their protracted isolation, had so far been safe from the interference and infiltration of the RSS for over 50 years. The unsuspecting Sangat is unwittingly paying for its very own destruction! The sangat should be alert to the nefarious designs of Rulda Singh and his involvement in the internal affairs of Sikhs in Pakistan. The sangat needs to proactively deal with and get involved in its own Panthic affairs. The PGPC needs to be especially wary and unsupportive of this group and need to uphold preservation of the precious shrines of Pakistan.

In a well appreciated move to defend Sikhi in Pakistan, the Khalsa Alliance, a Panthic watch organization, has informed Panthic Weekly that it has registered a complaint with the Pakistan embassy and has forwarded the names and passport numbers of the 41 individuals who are accompanying Rulda Singh into Nankana Sahib, Pakistan. A spokesperson for the Khalsa Alliance, which is also this paper’s parent organization, said that “the RSS has done enough damage in east Punjab and [we want to] forewarn the sangat that they should not be allowed to create communal disharmony [or] hatred in western Punjab. Rulda of the [Rashitrya] Sikh sangat and his cadre of RSS sevaks should not be allowed to partake in any Sikh/gurdwara religious activities”.

These people, for their selfish reasons, are selling out the Sikh Nation. The Sangat in both India and Pakistan needs to keep a close eye on their activities while they are in Pakistan for a five or six day stay. The Sangat in its infinite wisdom can empower itself to pick up the flag, rebel and organize to foil the nefarious plans of these enemies of the Khalsa Panth. Had the king of Troy listened to his son, who advised him to burn the horse before it entered the city, Troy might still be standing.