Amritsar Sahib, Punjab (KP) - This is a continuation of Panthic Weekly’s (PW) series of articles on the revelations made by Rashtriya Swayamsevak Sangh (RSS) representative Rulda Singh on discreetly made voice recordings obtained by our news bureau.

In this issue, PW is releasing recordings where Rulda narrates in detail some key meetings that took place between the RSS and the Sant Samaj. The Sant Samaj, also known as “Gurmit Sidhant Pracharak Sant Samaj” is literally a union of sants, babas, and deras modeled after a Hindu organization with a similar name. Although some of the representatives of the Samaj are practicing Amritdharis, a great portion of them ascribe to the Sanatanist beliefs of the Udasees and Nirmalas. Their empathy of Sanatinist practices has brought them head-to-head with the mainstream Sikh community when they created their own Sikh Rahit Maryada in the late 1990s, then recently opposed both the NanakShahi Calendar and allowing of Sikh women to perform sewa within the precincts of Sri Darbar Sahib.

Despite their differences on other matters, the RSS, which also opposed the NanakShahi Calendar, saw the Samaj as a natural ally and has kept close contact with its leadership over the last several years. The details of most of these meetings have been kept secret while some details have been leaked out in the mainstream press.

While the Sikh community will never know exactly what transpired in these meetings, here is what Rulda has to say... 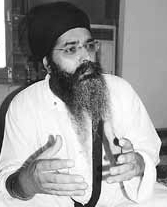 Rulda narrates details regarding the RSS request to the Damdami Taksal on removing pictures of Shaheed Singhs from the yearly diary they print. This meeting took place in Amritsar at the home of Mokham Singh, who is the spokesman of the Damdami Taksal.

"RSS chief Sudarshan had voiced reservations at the meeting over some “provocative” pictures in the taksal’s yearly diary in 1998." (Tribune India, March 15, 2003)

"The documents, however, describe the meeting as a successful beginning of the RSS dialogue with the Sikh militants as the taksal leaders not only agreed to withdraw the diary, but also agreed to hold regular interaction with the RSS chief." (Tribune India, March 15, 2003)

A series of interactions culminated in a bigger session at Mehta Chowk on December 26, 1999, which was attended by top Sikh religious leaders and RSS leaders, including a Governor of a Northeastern state and RSS chief Sudarshan, the papers reveal. (Tribune India, March 15, 2003)

Rulda provides information on three (3) additional meetings between the RSS and the Sant Samaj. The meetings took place at various locations which include the city of Ganeshpur, Hoshiarpur, and Damdami Taksal headquarters, Gurdwara Gurdashan Parkash Mehta Chauk. Those who attended from the RSS side included KC Surdarshan who heads the RSS, Rulda Singh, and other RSS heavyweights. On the other hand members of the Sant Samaj who took part in these meeting include Sant Baba Takhur Singh head of the Damdami Taksal, Sant Baba Sarbhjot Singh Bedi Unawale who heads the Sant Samaj, Sant Parmjit Singh Malpurwale, Sant Hari Singh Randhavewale, Sant Chamkaur Singh Seva Panthi, Sant Sukhchain Singh, Mokham Singh of the Damdami Taksal and Jasbir Singh Rode nephew of Shaheed Sant Jarnail Singh Bhindranwale. 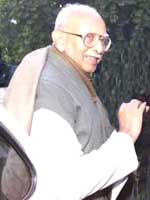 Rulda gives some details regarding the meeting between the RSS and Sant Samaj which took place at Damdami Taksal Headquarters, Gurdwara Gurdarshan Parkash Mehta Chauk. This meeting lasted for 3 hours and concluded with everyone agreeing to have further meetings. It was decided that to coordinate further meetings a five member committee from each side would be selected with each having one leader. The five members from the RSS side would include Surdashan, Rulda Singh, etc. Five names put forward by Sant Samaj leader Sant Baba Sarbhjot Singh Bedi Unawale were Sant Hari Singh Randhavewale, Sant Parmjit Singh Malpurwale, Sant Chamkaur Singh Seva Panthi, Sant Sukhchain Singh Dharampurwale and Mokham Singh of Damdami Taksal. The head of each committee would be Rulda Singh for the RSS and Mokham Singh for the Sant Samaj. During the conclusion of this meeting Baba Takhur Singh (former head of the Damdami Taksal) honors the head of the RSS, KC Surdarshan with a siropa, which was presented in the form of a shawl.

The RSS and Sant Samaj along with Jasbir Singh Rode have another meeting in the city of Ludhiana. Later on in the meeting they were joined by Tejwant Singh Grewal, his younger brother Daljeet Singh Grewal and Darshan Singh Mand. This meeting went on for 4 hours. This meeting took place in a home located in the Gurdev Nagar area. The original location of this meeting was at the dera of Sant Baba Sarbhjot Singh Bedi, but due to the media getting the word of this meeting and showing up, the location was changed to a location in Ludhiana. After the meeting concluded a report was created which gave all details of this meeting, which include who attended, what was discussed and the end result of the meeting. The names of the RSS leaders who had attended was removed as they all felt that if this information got out into the media it would cause a huge uproar.

"The meetings, denied by taksal leaders stoutly, were, however, secret at that time." (Tribune India, March 15, 2003)

Why the secrecy? What did the RSS and the Sant-Samaj want to hide from the public ? It is self-evident that the RSS has a deeply abiding erosive influence among certain circles that already wield a fair amount of power in many areas of rural Punjab. By exposing these on goings, Panthic Weekly is raising a dissenting voice against such massive corruption, misinformation, and interference in the affairs of the Khalsa Panth by the RSS and the central government. How much further will the infrastructure of the Sikh Panth be corroded by the forces of Brahminism ? In his book, The Sikh Religion, Max Arthur MacAuliffe answers this query:

"Hinduism... is like the boa constrictor of the Indian forests." .... "it winds itself around its opponent, crushes it in its folds, and finally causes it to disappear." ... "In this way, it disposed of Buddhism," ... "it absorbed the religion of the Scythian invaders of Northern India," ... "it has converted uneducated Islam in India into a semi-paganism; and in this way it is disposing off the once hopeful religion of Baba Nanak. Hinduism has embraced Sikhism in its folds," ... Its ultimate destruction is, it is apprehended, inevitable without state support (Max Arthur Macauliffe, The Sikh Religion, 1893)

Sender IP identification :3.83.32.171
By clicking on the 'Submit' button, you agree to the following conditions: