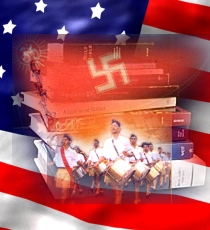 Sacramento, California (KP) - In a bid to submit their own doctored version of Indian history to the California Board of Education, two US based Hindu groups; the Vedic Foundation, and the Hindu Education Foundation (HEF) are in a battle with historians as to what will be noted as history in school textbooks.

The HEF was founded by the Rashtriya Swayamsevak Sangh (RSS) in 2004. The RSS as the readers will note is an organization that has a grotesque history of blatant sectarian violence towards Christians, Muslims, Sikhs and other minorities. The Vedic Foundation is an organization that is attempting to simplify Hinduism by narrowing worship to that of their god Vishnu.

Although current textbooks contain some obvious errors such as stating that the Hindi language is written in Arabic script, the two groups are not focusing on these mistakes. Rather they are adding their own Hindu nationalistic ideas to suit their agenda.

Examples of this can be seen from an objection by the HEF to change a quotation in a textbook stating that Aryan rules had created a caste system in India that kept peoples separated according to their work. The HEF demanded that this idea be changed to "During Vedic times, people were divided into different social groups (varnas) based on their capacity to undertake a particular profession."

In another example, the HEF asked that a sentence which described the discrimination of women to be changed to “men had different duties (dharma) as well as rights than women."

However far surpassing anything else is the HEF’s attempts to change the truth of what history states is the origin of the Hindu religion. Both the HEF and Vedic foundation do not want history to state that the Hindu nation was founded by Aryan invaders. An attempt is being made by these two groups to portray the Hindu religion as being native to India. "Textbooks must mention that none of the [ancient] texts, nor any Indian tradition, has a recollection of any Aryan invasion or migration," states engineer and pro-Hindu activitst S. Kalyanaraman.

On the topic of whether Aryan invaders brought the roots of the Hindu religion with them or not, Micheal Witzel, a Harvard University Sanskrit scholar and Indologist along with comparative historian Steve Farmer concludes in the magazine Frontline that "unquestionably, all sides of Indian history must be repeatedly re-examined. But any massive revisions must arise from the discovery of new evidence, not from desires to boost national or sectarian pride at any cost."

On the other hand Meenakshi Jain who is a historian at Delhi University wrote a book on Indian history for high school students, which was accepted by the then ruling Hindu nationalist Bharatiya Janata Party (BJP) states that "Indic civilization has been a big victim of misrepresentation and belittling of our culture.” She also says that history is meant to be rewritten, depending on the perspective and needs of the present time.

"There is no such thing as an objective history so when we write a textbook, we should make students aware of the status of current research of leading scholars in the field. It should not shut out a love for motherland, a pride in your past. If you teach that your country is backward, that it has no redeeming features in our civilization, it can damage a young perspective" she adds.

Other shocking statements by these groups can be noted as well. Anu Mandavilli, an Indian doctoral candidate at the University of Southern California states that "some of the groups involved here are not qualified to write textbooks, they do not draw lines between myth and history.". Speaking in regards to the Vedic Foundation in Austin, Texas, she says, "On their website, they claim that Hindu civilization started 111.5 trillion years ago. That makes Hinduism billions of years older than the Big Bang." (The assertion has since been pulled from the site.) "It would be ridiculous if it weren't so dangerous" she adds.

“Hindu Education Foundation, an educational project of Hindu Swayamsevak Sangh, strives to replace these various misconceptions with a correct representation of India and Hinduism.” is the statement made on http://hssworld.org website.

Furthermore, according to sources S. Kalyanaraman, advisor to HEF and an ideologue of the Hindutva movement in the U.S. hold the view that “It is time to attack the 'secular'. It is a dirty word, a dirty system and should be used as a word of abuse against anyone who does not adhere to Sanatana Dharma…I think secularism should be deemed a negation of Dharma, anti-Dharma, a word of abuse and hence rejected altogether.”

Even upon the investigation of the HEF website (http://www.hindueducation.org/index .html), the website contains a resource link in which a website called http://www.atributetohinduism.com/. The website is described as “information about Hinduism and Hindu contributions.” Searching this website one can find statements such as “India may have had a superior civilization with possible contacts with extraterrestrial visitors, and the flying devices called 'Vimanas' described in ancient Indian texts may underline their possible connections with today's aerospace technology…” In addition statements such as “the mention of airplanes is found many times throughout Vedic literature.”

Furthermore, articles with titles such as “Ancient Writings tell of UFO visit in 4,000 B.C.” and “Did Man reach the moon Thousands of Years ago?” are just some of material to be found upon exploration of the aforementioned websites.

Even though the finalization of the school texts are expected to take place in the next few weeks, readers should take serious note of the suspicious agenda of the above mentioned malicious organizations and ponder upon their real agenda. The recent actions of the Vedic Foundation and HEF should set off alarms to all persons, as the character of these groups parent organizations are known, and the damage that they can do to society in general is known to be treacherous.

"The textbooks before were not very good, but at least they were more or less presentable. Now, it is completely incorrect” says Professor Michael Witzel of Hardvard University.