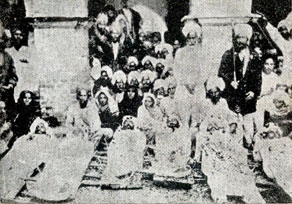 The Babbar Akali Movement came into existence when the peaceful Akali struggle for Gurdwara reform was passing through a crucial stage. Popular Sikh shrines like Nankana Sahib, Tarn Taran Sahib and Guru-ka-Bagh were occupied by the Mahants, who had made the shrines into their personal property, vanquishing the sanctity of the holy places. The Mahants had become the puppets of the government of the Punjab. With the open backing of the Punjab Government, the Mahants stood against the Akalis and attempted to finish them off and put an end to their peaceful struggle for Gurdwara reformation.

The Babbar Akali Movement took place during the years 1921 to 1925. The majority of the Babbar Akalis were returned immigrants from Canada. Some of them had actively participated in the Gathar Movement and were also known as Gatharites (Gathari Babbeys).

The Babbar Akalis were Gursikhs, who were against the imperialist policies of the British Government. Babbar Akalis did not approve of the Congress leadership and were against the Gandhi formula of non-violence and noncooperation. They were upset because of the tragedy of Nankana Sahib in which hundreds of innocent Sikhs were massacred. They rejected the peaceful struggle for reformation in the Sikh shrines and decided to lead their movement separately without the company and cooperation of the dominant Akali leadership.

The Babbar Akalis made their first appearance during the Sikh Educational Conference held at Hoshiarpur on March 19th through the 21st, 1921. Later on, they organized their own meetings which were attended by renowned personalities like Master Mota Singh, Kishan Singh, Amar Singh, Tota Singh Peshawari, Gurbachan Singh and Buttan Singh and some of the returned emigrants from Canada. The working committee of the Babbar Akalis was elected in 1922 with Sardar Kishan Singh as Jathedar, Dalip Singh Gosal, as Secretary and Baba Santa Singh as Treasurer. To reinforce the propaganda machinery and to promote the cause of the movement, the working committee decided to publish a newspaper called Babbar Akali Doaba Akhbar, with Sardar Karam Singh Daulatpur appointed as Editor. Their main objective was to "eliminate" certain officials and non-officials condemned as enemies of the Khalsa Panth.

Babbar Akalis declared it necessary to teach a lesson by eliminating the toadies (stooges) and those who were responsible for the massacre of the Akalis at Nankana Sahib. It was generally felt that Mr. C.M. King, the Commissioner of Lahore, J.W. Bowring, the Superintendent of Police, Mahants Devi Dass and Basant Dass, Sunder Singh Majithia and Baba Kartar Singh Bedi were responsible for the Nankana Sahib Massacre.

They appealed to the Hindus and Muslims through articles, leaflets, Babbar Akali Doaba Akhbar and the religious congregations to join them in their war against the foreigners for freedom. To fulfill their programme Bela Singh and Ganda Singh were sent to Lahore on May 23, 1921 to take care of Mr. J.W. Bowring. They were suspected by the police at Lahore Railway Station and arrested. During the interrogation the two let out the secrets, which resulted in the arrest of Amar Singh, Narain Singh, Tota Singh, Chatar Singh, Chanchal Singh, Thakur Singh, Shankur Singh and many more members of the group. warrants for the arrest of Master Mota Singh, Bijla Singh and Kishan Singh were also issued, who had managed to dodge the police.

Babbar Akalis also aimed to paralyse the supporters of the British Government such as Zaildars, Sufedphoshes, Lambardars, Patwaries, police informers and other toadies by terrorising them through various forms of punishments. According to the plans of the Babbars, an attempt was made to take care of Arjan Singh Patwari of Haripur who had allegedly helped in the arrest of Master Mota Singh. Somehow the attempt failed. Then, Zaildar Bishan Singh, a retired official of the Canal Department was shot dead on February 10th, 1923.

Through betrayal or through information supplied by informers, the important leaders of the Babbar Akali Movement like Jathedar Kishan Singh, Master Mota Singh and Sunder Singh were arrested. The arrests of these leaders actuated the rest of the Babbars to set up their programme of eliminating those responsible for these arrests. Consequently a series of continuous "eliminations" took place.

Buta Singh Lambardar and his grandson were eliminated in the village of Nangal Shaman of district Jullundur on March 11, 1923. On March 19th Labh Singh, an employee of the Police Training School, Phillaur, was shot dead in the Hoshiarpur district. He had helped in the arrest of Jathedar Kishan Singh.

The Babbars issued an open letter addressed to the Governor on March 22, 1923. They claimed the credit for the eliminations and threatened that other toadies would also face the same fate. Hazara Singh of Hoshiarpur district was killed on March 27, 1923. On April 17th, ex- Subedar Gainda Singh was shot dead in the village of Ghurial. Gainda Singh had helped the police to arrest certain Babbars. In the Hoshiarpur district Chaudhri Ralla Ram and his brother Ditta were killed in the village of Kaulgarh on May 27th, 1923.

The continuous "elimination" created panic among the toadies and the Government authorities. Numbers of village officials and other loyalists to the Government started expressing fear for their lives and the desire to resign from their posts. The government took stiff measures to meet the Babbar challenge and tried to restore peace and confidence among the loyalists. Special C.I.D. was deputed to assist the police. The police force at Jullundur was increased by adding another fifty men. Above all, a special enrollment of 150 was sanctioned, and an Indian infantry of 250 and a squadron of armoured cars was deputed to assist the police in making the arrests of the Babbars. Leaflets were scattered by airplane over the affected area in order to restore peace, and the Babbars were proclaimed as an unlawful association under the Criminal Law (Amendment) Act of 1908. The government offered handsome rewards of Jagirs and cash prizes if someone provided useful information leading to the arrest of any Babbars.

Undettered by the arrests and deaths of the important leaders, the Babbars continued their programme of eliminating the toadies and the supporters of the Government. Simultaneously, they continued preaching against the British rule. The threats by the Babbars and the continuous elimination of toadies and the government officials caused considerable anxiety in the official circle in London. Members of the British Parliament raised questions about the deteriorating condition of law and order in the Punjab. The government of the Punjab was critized, and fears were expressed about the safety of the British officials in India.

On June 4th, 1923, Sir C. Yates drew the attention of the House of Commons to the Babbar programme of murdering officers and the foreigners and wanted the Government to make a statement on the stiuation in the Punjab. The motion was again tabled on June 14th, 1923 in the British Parliament regarding the seriousness of the Babbar Akali Movement. Upon pressure of the British Parliament, London, the government of the Punjab introduced more stringent measures against the Babbars. Hideout places of the Babbars were raided, with similar raids carried out in the villages of Pandori Nijran, Kishanpur, Jassowal, Paragpur, Kot Fatuhi and Daulatpur. As a result, 186 arrests were made.

By the middle of 1924 all the important Babbars were either killed or arrested. However, the Akali leaders and the Congress leaders like Mahatma Gandhi did not approve of the Babbars' programme of violence. The Shiromani Gurdwara Parbandhak Committee (S.G.P.C.) issued communiques appealing to the Sikhs to disassociate with the activities of the Babbars. writes Mohinder Singh, author of The Akali Movement:

"Though the Akali leadership disowned both the Babbars as also their methods and went even to the extent of passing formal resolutions against them, the Babbars contribution to the Akali Movement cannot be ignored. They increased the bargaining power of the Akali leadership by terrorising the bureaucratic machinery and its supporters in the Punjab and thus compelling the Government to come to terms with them. The Babbars equally contributed towards the weakening of the opposition by vested interests in the villages to the Akali Movement by announcing their plan of eliminating all those responsible for the Nankana tragedy and by actually assassinating some of the loyalists who had helped the authorities in the province."