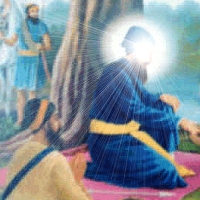 This article is a poetic meditation on the ‘Rider of the Blue Steed,’ the Tenth Guru. The special feature of Puran Singh’s articulation is that it is a free intermix of the conceptual and emotional, distinguished from the cerebral hermeneutic of the West. Guru Gobind Singh emerges from the dimension in which an unusual integrity of the antahkaran (mind, soul, conscience, heart,and understanding) begins to envision everything in real and symbolic terms, simultaneously. On a cautionary note, one shall not commit a literalistic fallacy that occurs due to one’s being naïve about the symbolic and phenomenological operations of the mind. The punctuations and spellings have been amended to reflect the contemporary parlance; NO word is added or omitted. The original rendition of the article is not known; this version is adapted from a journal titled Puran Singh Studies, Vol. 1-2, Jan-Apr 1981, Panjabi University, Patiala.]

They of India have not understood Him. Gandhi calls him a "misguided patriot." Men of this world, who wish to comprehend Truth by their own intellectual measures, are forever incapable of understanding the true nature of Inspiration, which is the life-breath of the really great. Whenever they approach such inscrutable personalities, they make but grotesque estimates. After centuries of intellectual advancement, they stand still exactly on the same spot, utterly incapable. In one age to them, Joan of Arc is but a witch and the end of the intellectual justice is to case her in fire. Today the ghost of non-violence is let loose and Guru Gobind Singh is a "misguided patriot." Christ says, "Judge not." Because we are not omniscient nor seers of all the three times – past, present, and future – it is impossible for us to judge truly even common fellowmen like ourselves, in spite of an intimate contact and even identity of our natures and motives. Much more difficult becomes our forming opinions about beings who have in their inner nature, transcended our plane of existence.

The intellectuals who are great, who are famous these days, at best, are but synthetic personalities, the mere laboratory products of the systems of the schools of man-made, mind-born Ethics, and are but toy replicas of the great, whose conduct is spontaneous, whose character is the radiation of the sun.

They are the products of those mysterious cosmic processes, which make the sun and the moon. For the dead toy replicas of the great it becomes physically impossible to analyze the inner motives of the beings of immortal inspiration. All opinions expressed by such lower men about those who live, move and have their being in acceptance of the cosmic inspiration, are as false as the opinion of the clergy who declared Joan of Arc a witch and sentenced her to be burnt alive.

Sword is the symbol of the creative processes of that mysterious incomprehensible Creator-Complex of nature. Nature is not Creation they say, it is spontaneous evolution they say; it is not Being they say, it is Eternal Becoming they say; it is not spiritual they say, it is material and mechanical they say; it is all electrical substance they say; it is not soul they say; but only the insane doubt now that it is a complex. No one view can define it accurately. Guru Gobind Singh sees the flash of the sword in this dark mystery complex. He sings his "Song of Sword" and by its cadence transmutes the miserable wretched people of Punjab, not into temporal kings, a miracle, which even an ordinary worldly man of empire carving ambitions like Sivaji, could perform in transmuting his mercenary soldiers into Peshwas, but into Phula Singh Akalis. Cut these disciples of Guru Gobind Singh as they did cut Bhai Mani Singh, instead of blood, the nectar of inspiration flows from their veins. The name of the Eternal resounds in their bones and as they of the world sawed them asunder, only that glorious cadence (Sat Nam) was in response to the axe strokes. His disciples rose all of a sudden from nowhere, as Superman, who were, as the same time, like the clouds of the sky, raining as they were bidden to rain, and striking down like the bolt of heaven as they were bidden.

Not protest but obedience was their creed. Their protest was one with the protest of the Divine Creator complex, called Hukam by Guru Nanak in Japji, and it shone in the Image of Sword seen by Guru Gobind Singh.

The Khalsa came ready made from Him … that blue-wearing Superman, armed from head to foot wholly dedicated, ready to die – the historian says, as Minerva from Jupiter – a highly explosive personality, showering both nectar and thunder, as the merest tool of the Cosmic Complex.

Riding His Blue Horse, clad in the robe of the whole starry Heaven, and followed by His Five Horsemen, he goes riding by the doors of His lowly disciples still and as the horses strike the rocks, the sleeping ones awaken still and sing:

O King of Purple eternity,
who loves us,
Who comes and lies with us at,
Night unknown to us,
Comforting us in our distress,
O Weaver of the Crest Jewel of all-Godliness,
all-Humanity,
Come and meet us the peasants of the Punjab.
O Glorious Guru Gobind Singh!
Come ride through our hearts,
Come ride through our eyes.

Guru Gobind Singh is the Indweller of Souls. He is the vision that vitalizes the decaying the finite centers of life with the touch of the Infinite. Name Him and you are transported. Name Him and you ride very death to His Door. Woe be for the day, who, surrendering their soul to the false brilliance of any intellect, the disciples of the Glorious Guru would turn their back on Him – once before in history, they did so. The disciples left Him at Anandpur. But they found no place to go to. Wives denied their husbands, mothers their sons, sisters their brothers – for the Punjabi Sikh woman truly saw there is no life but with Him. What is the world without Him? So they died. So they lived.

Said Khan the Moghul General doubted. All have intellects, not only the modern subtle-minded Hindu. Guru Gobind Singh came riding His Horse to him in his camp. Sayeed Khan leveled his gun at Him. It missed the Guru. He was asked to try again. Said Khan put his head on the Guru’s feet. He was informed. The camp lay where it was. The armies of the Moghul still besieged Anandpur. But Sayeed Khan went up to the hills singing Him, as a maiden, falling in love with her man, renounces all and sink into the depths of life. But the Guru does not show Himself to those who have not entered the shrine of Acceptance, who have not understood Reverence, who have no wonder in their eyes, and who love not the spiritual Beauty, which transmutes man into angels in an instant. Perfection is in His Glance.

There is no standard in the East or in the West by which these intellectuals can form an idea of the inspiration of the Infinite. It was a stream that flowed to Him, which He received within Himself. "I was," said he, "Reluctant to come here on this earth. But I came."

My soul is still engulfed in that current of Inspiration-Infinite.

He came and he went. Only the trail of his garment, still shines, the sound of the hoofs of His steed is still audible. Wrapped in that shining garment, listening to that sound, we go daily where He is. This is the religion of His Disciples. Our eyes are red with the glory that He has shed on our paths. And we go on.

His sword waves the lightning flashes in the cloud-filled sky, but it rains after the centuries of oppressing heat.

"Man is the Temple,
Let this flame burn within there,
As the Lamp of the Eternal,
They are my Khalsa,
In whose hearts burns this Inspiration
Of the Infinite, day and night.
The story undimmed,
He is the pure."