Tragedy for the UK Sikh Community 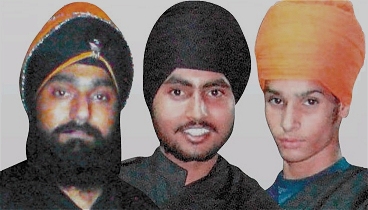 Ullswater Lake District, UK (KP) - Three Gursikh youths from the Wolverhampton area, Harvinder Singh, 15, Satvir Singh, 17, and Tajinder Singh, 21, tragically died while enjoying a trip to a lake in which they were paddling earlier that day.

The three youths were active in their communities and were part of the Sikh Martial Arts Gatka team, Panth Khalsa Gatka Akhara. The trio had come to the lake to have a peaceful break with their friends. After paddling for some time on the lake and returning their boat, the friends decided to return to the lake and play atop a partially submerged shelf in knee-high water. 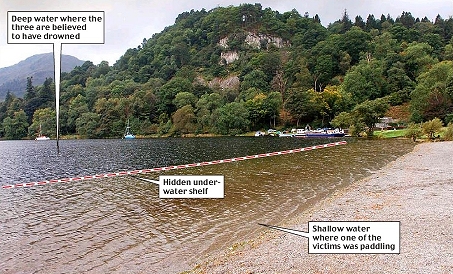 Ullswater Lake where the drownings occurred

Tragically, the youths came into trouble when one of them fell off of the abrupt edge of the shelf into extremely cold water which was estimated to be up to 30 feet deep. One of the youths, Harvinder Singh, attempted to save his friends yet also became a victim of the cold waters.

Zak Ratcliffe, a boat worker saw that the boys were in trouble and attempted to rescue them jumping into the water himself. However he could not find their bodies. The bodies were found later after an intensive search by helicopters, divers, and the coastguard. A 15 year old boy who was with the group was rescued from sharing the same fate. The boy was hospitalized with non-life threatening injuries and was later released.

During this extremely heartrending time, families, friends and associates of the victims offered their condolences sharing fond memories of the youths and the impact they had on the lives of others. Several kirtan programs have been scheduled by the strong closeknit UK Sikh community in memory of the young Gursikhs.

One of the youths, Harvinder Singh was known to be popular among his school mates and helpful to anyone needing assistance.

Acting head teacher Jill Jordan commented saying “He was a really popular lad who was liked by pupils and staff alike. We will also be looking at installing a memorial for him at the school which I know is what the children would have wanted.”

Editors Note: Khalsa Press extends it's deepest sympathy to the family and friends of the three GurSikh victims, may Guru Ji bless them with the strength to accept this unforseen event as His Bhanna.