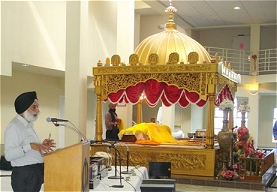 Fremont, CA (KP) - "Sikhs should follow only Guru Granth Sahib Ji, and not any sants or babas, and they should get involved in grass roots projects in Punjab to eradicate the many social and health woes facing people of the ancestral homeland of the Sikhs." This was the message being spread by Colonel Gurbirinder Singh (GS) Sandhu, of the Majha Ex-Servicemen Front and chairman of Aapna Punjab organization.

The retired colonel, currently visiting Northern California this week, is being welcomed by all the major Gurdwaras in the greater San Francisco Bay Area. Known for singlehandedly spearheading the campaign to expose and incriminate the notorious fake Police Cat turned Nihang Ajita Poohla, he has received appreciation from Panthic groups worldwide. 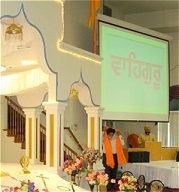 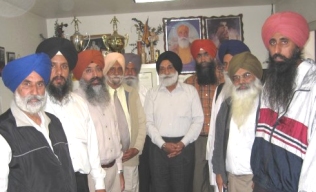 Last weekend, the Colonel was invited to speak to the congregation of Gurdwara Sahibs El Sobrante and Fremont, where he presented his views and thoughts to the Sangat.

Beware of fake Babas and Sants

Col. Sandhu pointed out how simple Sikh men and women are being exploited by some of the ever increasing numbers of so-called sants and babas who have established elaborate deras where many have sexually exploited and abused the women followers. He stated that the Sikh community needs to be aware of the nefarious activities of these anti-panthic people. He exhorted the Sikhs all over the world to seek the guidance and follow the teaching of only Sri Guru Granth Saib and not from these self-styled Babas.

He gave examples of three such Babas, ‘Johlanwala Baba’, ‘Ram Rahim Singh’, and finally Mann Sinh of Pehowa and the latters' exploitation of followers. He requested that the Sangat not give money to these already well-to-do deradars and instead concentrate on helping fellow Sikhs in Punjab who are going through some trying times.

He detailed the current deteriorating situation in Punjab in terms of drug abuse, AIDS/HIV infections, and the spread of the dera culture. His organization, Apnaa Punjab, a non-governmental organization (NGO) provides services for the socio-econic development to those Punjabis who are in less fortunate circumstances, via the following initiatives : educational and health services, welfare centers for women, child adoption programs, human rights and social justice representation through the NGO.

The Gurdwara Managements of El Sobrante appreciated his efforts in raising awareness of the social issues in Punjab and helping find concrete solutions for them. In appreciation, he was presented siropas from the Head Granthis of both Gurdwara Sahibs.

Col. Sandhu is scheduled to return to Punjab after concluding his visit this weekend. Readers can visit www.ApnaaPunjab.org for further information on the projects and initiatives headed by Col. Sandhu’s organization.