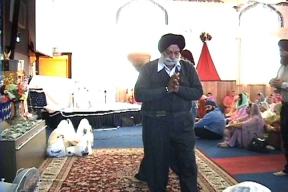 Stockton, California - (KP) Col. Gurbirinder Singh (GS) Sandhu, head of Majha Ex-Servicemen Front, and the man who single-handedly spearheaded the movement against the notorious Police Cat turned Nihang, Ajit Poohla, was not allowed to address the Sangat of a historic California Gurdwara regarding the misdeeds of the alleged rapist Baba Mann Pehowa. The retired Col. along with sympathizers walked out of the Gurdwara in protest of the committee’s heavy-handed decision.

The committee, seemingly under pressure from pro-dera forces, denied Col. GS Sandhu the opportunity to address the Sangat regarding the case of Baba Mann Pehowa that he has submitted to Sri Akal Takht Sahib. The committee’s utter disrespect for Col. Sandhu and their actions meted to muffle free speech has received widespread criticism within Sikh circles.

Col. GS Sandhu had been visiting various Gurdwaras Sahib across the UK, and America bringing awareness of the social and religious problems in Punjab and how his organization, Apnaa Punjab, is working towards finding solutions for them. This was the last leg of his trip, and he had visited Gurdwara Sahib Fremont, San Jose, El Sobrante, and West Sacramento, all in Northern California, near the San Francisco Bay Area.
Gurdwara Sahib Stockton was to be his last stop before returning to Punjab. Several organization, including Dal Khalsa of America, Shiromani Akali Dal Amritsar Youth Wing, The Khalsa Alliance, American Gurdwara Council, Khalsa Jagitri Lehar, and Gurmat Chetna Lehar had taken a full page ad in Chardikala News paper detailing Col. Sandhu’s extraordinary services for the Panth, and stated that on behalf of these organizations and the Sangat, he would be honored on his visit at the historic Gurdwara.

On the morning of Sunday, October 8th, Col. Sandhu addressed a large gathering at Gurdwara Sahib of West Sacramento, and was welcomed warmly by President Balbir Singh Dhillion and the rest of the management committee, as he had been by the managements of all other Gurdwaras in the area, including El Sobrante, Fremont, San Jose. He spoke on the spread of AIDS/HIV, and drug abuse in Punjab, and also about the dera culture and its dangers to the Panth. He mentioned fake Babas such as Poohla Nihang, Ram Rahim Singh of Sacha Sauda, Dera of Johlan, and Baba Maan of Pehowa, and the various allegations against them. He was thanked by the management committee for visiting the Gurdwara Sahib and for bringing awareness to the Sangat and then was escorted out with a group of Singhs for his trip to Stockton. 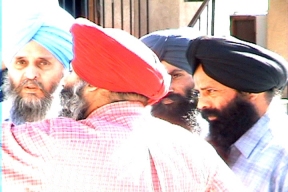 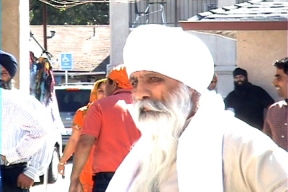 Supporters of Baba Mann Pehowa waiting for Col. GS Sandhu,
Committee members remarked they were ready to 'remove turbans' if the Colonel spoke against their Baba.

Upon arrival in Stockton, Col. Sandhu and organizers noticed several of Baba Mann Pehowa’s followers were awaiting their arrival while others were loitering about the premises. Col. Sandhu was to address the congregation at 1:00pm, but instead of receiving a warm welcome, and allowing him the address the Sangat, Gurdwara committee members isolated Col. Sandhu from all the other sevadars and began to interrogate him in a humiliating manner in their office.

The committee members, who are seen by many in the public as Baba sympathizers, stated that the Colonel would not be allowed to speak against Baba Maan Pehowa. If he were allowed, they retorted, “turbans would come off”, and many famous people have been insulted here in this manner, referring to an incident several decades back involving General Bhullar. This clearly show the lack of respect his chelays have for Guru Gobind Singh Ji's dastar, and for the colonel. If the committee genuinely cared for the well being of their community they would have warned the Baba's chelay to not infere in the Gurdwara's operations. No such attempt was made.

On the other hand, Col. Sandhu reiterated that he had openly addressed Pehowa’s issue at all other major Gurdwaras in the UK, New York and in California and felt necessary to share the truth with the public about this baba’s misdeeds. The members and the Colonel soon left the office after tense discussion.

Col. Sandhu then met with the Panthic organizations and apprised of the conditions set by the committee on his speech. Sewadars suggested to the Colonel that the decision was his on whether he wanted to be censored and muffled by this committee and keep the truth away from the public. They were of the opinion that it was better not to speak than be controlled by this pro-Baba committee. He Col. Sandhu agreed and stated he too did not feel it was right for the committee to suppress his speech.

Col. Sandhu, evidently, decided it was better to not address the congregation if he was not to be allowed to state the truth in the presence of Guru Granth Sahib Ji. “I felt suffocated”, stated the disappointed Colonel. After all he was the sole legal representative for most of those victims and he had promised them that justice would prevail. Everyone applauded the Colonel for taking this bold step.

The Colonel then paid his respects to Guru Granth Sahib Ji, had the darshan of the Sangat awaiting his arrival and walked out of the Gurdwara Sahib in protest. Dozens of supporters and sympathizers from various Panthic organizations also followed him out, including representatives of Dal Khalsa of America, who were to honor the Colonel at the Gurdwara Sahib for his great Panthic contributions. Due to the cold treatment given to their visiting guest, the Dal Khalsa of America and the other sevadars decided they would not utilize the Gurdwara Sahib premises to honor the Colonel, instead they would rather choose another venue for this function.

The awaiting Sangat was left clueless to what had happened, even the committee members were puzzled by what had just occurred. Several of them panicked and attempted to convince the Colonel to return, but he stood firm on his decision. Several committee members at that time attempted to create a ruckus blaming the organizations that sympathized with the Colonel Sandhu of creating an unsavory situation at their Gurdwara. The sympathizers replied that this situation was created by none one other than the committee and that no one else is to blame.

Past Questionable events at the Gurdwara

Sevadars of the Khalsa Alliance stated to the committee, “What type of conscience allows you to censor what Col. Sandhu says in the presence of Guru Granth Sahib, yet you allow illiterate individuals like Hardev Singh Loolowal, and Lahori Ram to spew nonsense and mislead the Sangat.” Interestingly, Hardev Singh Loolowal was allowed to perform his sadh katha well beyond his allotted time, while Col. Sandhu was being “interrogated” by committee members. Several weeks ago, another similar drama was played out mocking the life and sacrifice of Sukhdev Singh Babbar when Lahori Ram told the Sangat that for Sikhs there is no need to wear the Kirpan.

Many frustrated sevadars asked where the committee was when such disrespect was going on in the presence of Guru Granth Sahib. “Instead of stopping Col. Sandhu, why don’t they do their duty and stop the beadbi that has gone on at this historic Gurdwara in the last several weeks? Why is Col. Sandhu being targeted?” stated another of Khalsa Alliance sevadar.

Col. Sandhu by now had stepped outside of the Gurdwara premises, and gave a small interview to PW in which he summarized what he would have said to the congregation inside the Gurdwara if he was permitted to address them freely. This will be made available for our readers in the near future.

Afterwards, Col. Sandhu along with sewadars for the various Panthic organizations were then taken to another location in Stockton, where Col. Sandhu was interviewed by other press reporters, and presented a siropa, a Sri Sahib, and a gold plaq by Dal Khalsa or America, and other organizations. The Colonel expressed optimism and stated that soon the Sikh community will rid themselves of the cancer of Babas and deras, and pointed out that Jathedar Vedanti and Jathedar Balwant Singh Nandgarh have given him assurance that action would be taken against such Baba, especially Maan Pehowa. 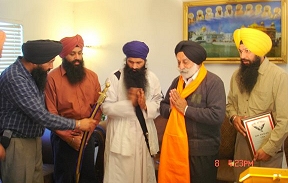 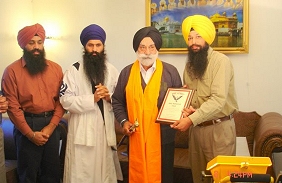 Siropas, Sri Sahib and a gold Plaq being presented to Col. Sandhu by
Dal Khalsa of America and other Panthic Organizations 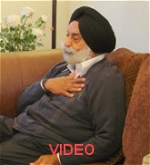 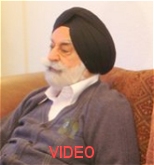 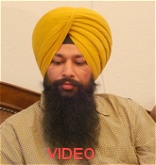 In the end, the Colonel thanked the organizations for supporting his effort against the fake Babas and again expressed disappointed in the way the Stockton Gurdwara managements had behaved, and hoped they will realize what the facts are. 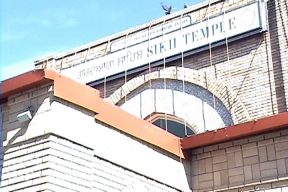 The Stockton Gurdwara is often thought of as a Panthic Gurdwara, but the events such as what occurred last weekend have raised doubts about whether this historic landmark is being managed properly. The Gurdwara was founder by the members of the Gadar movement near the turn of the 19th century. The members of the Gadar movement were revolutionaries who became trailblazers of the freedom struggle to free South Asia from British occupation.

Today it is people like Col. GS Sandhu who are at the forefront of another revolution, the revolution to liberate our Gurdwaras from the clutches of derawadis and masands such as Ajit Poohla, who had overtaken Shaheed Bhai Taru Singh Ji’s Gurdwara and had used it as a place for committing sacrilegious acts such as torture and rape. If these people, such as Col. Sandhu are not allowed to speak the truth and inform the pubic then who will?