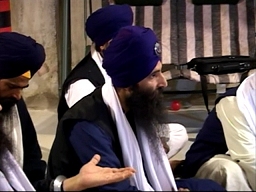 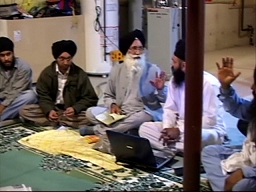 Brampton, Canada (KP) - In the past few years, the public has seen an assortment of anti-Gurmat literature being produced by various individuals promoting Kala-Afghana/missionary lobby viewpoints. In their message, they viciously attack the very fundamentals that set the Sikh Panth apart for other faiths. Instead of utilizing sound logic and Gurbani as a basis of their arguments they often resort to ridicule and sarcasm in a sign of desperation and lack of confidence.

One such "parcharak" is Inder Ghagga. He was not allowed in UK Gurdwaras and was reportedly even dragged from the stage at a Gurdwara in the Eastern United States.

In Canada, he has caused skirmishes between his supporters and those who were offended by his derisive remarks against Gurmat and respected Gursikhs.

When he spoke at Mayfield Gurdwara Sahib, in Brampton Ontario two weeks ago, a melee broke out between his supporters and members of Panthic organizations who charged that he was spreading anti-Sikh propaganda and was insulting respected Sikh personalities in his books and on stage. Ghagga in his book "Sada Berra Kio Garkia", has harshly criticized various Gursikhs and key Sikhi concepts.

In the Toronto area, Ghagga is being promoted by the pro-Kala Afghana supporter, Gurcharan ‘Jeeonwala‘ Brar. Overconfident of his debating skills, Ghagga has appeared on various radio talk shows and private functions where he has openly challenged anyone to debate him on his twisted philosophy on Gurmat.

Some of his views include :

Since no one had seriously challenged him, he became further encouraged and arrogant and began to boast that there was not a single Sikh in Toronto who could debate him.

When sevadars of Gurdwara Tapoban Sahib, located in the Toronto suburb of Brampton, heard about Ghagga’s haughty challenge, they became curious about who this individual was. The more they found out of his warped ideology, the more they felt it was necessary to confront this man at an intellectual level for the defense of Gurmat and Panthic principles.

Gurdwara Tapoban sevadars after a Gurmatta, accepted the challenge and via Ghagga’s liaisons, a debate was set up for September 27th, 2006 at Gurdwara Sahib Tapoban.

According to witnesses present there, "He came with about 10-15 of his supporters. The Singhs went in the debate as underdogs and he was full of haumai. Within minutes [of debating], he realized that he was stuck."

‘The Fierce debater vs. a Young Khalsa’

Ghagga was to debate the Panthic Singhs led by Bhai Kulbir Singh, a young Singh in his thirties, who is considered quite knowledgeable in Gurmat and Gurbani Viakaran (grammar). Ghagga, who has been preaching his missionary 'Sikhi' for the last three decades, thought this would be a no contest debate. Soon, he would find out how wrong his assumptions were.

According to several eyewitnesses interviewed by Panthic Weekly, Ghagga became so uneasy that he asked for drinking water three times. Witnesses stated that his hands were trembling and he was perspiring heavily throughout the debate. It was clear that the fierce 'debater' Ghagga had lost his bearing.

Ghagga lost the entire debate on all subjects and afterwards some neutral Singhs insisted that another debate be set at a public venue. The date was set for October 1, 2006 at 9am, but Ghagga never showed up. Via third parties, and with great difficulty, he was persuaded to debate and finally the debate was set up for about 4 hours later at 1pm.

This debate went on for about two hours and has been video recorded. The recordings of this second debate are being made available on Panthic Weekly in the article Ghagga Debate Videos.

It is interesting to note that the Panthic Singhs led by Kulbir Singh did not have any prior public debating experience, yet they were successful in defeating someone such as Ghagga who has spent his entire life in such controversies. Instead of debating on the contentious issues, Ghagga kept digressing and changing subjects. This further proved that he could no longer defend himself or his philosophy.

Most importantly, Ghagga publicly accepted that Naam Simran is a principal of Gurmat. He accepted that his sakhi about Guru Nanak Dev Ji eating meat in Mecca was his imagination as was Guru Arjun Dev Ji’s fainting incident.

According to eyewitnesses, having lost twice on all subjects, Ghagga left as a very upset man. He has declined to debate any further. His skills seems more fitted for an arguer than a true debater.

Subsequent to this debate, the Panthic Singhs had challenged him for another debate and the challenge was published in the Punjabi Post, a Toronto based newspaper. However, the man who boasted so much on the radio waves that not a single Singh in Toronto can debate him, had now become silent. Publicly it is now clear that these so-called scholars are merely paper tigers.

Sender IP identification :3.230.148.211
By clicking on the 'Submit' button, you agree to the following conditions: