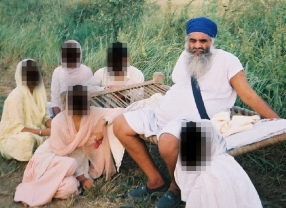 Chandigarh, Punjab - Retired Colonel Gurbirinder Singh (GS) Sandhu of the Majha Ex-Servicemen Human Rights Front has requested the European sangat to shun the pseudo-sant Maan Pehowa who is currently on a ‘preaching’ trip in Italy.

Col. Sandhu stated that the pakhandi Baba Maan Pehowa is currently collecting donations from the European Sangat and misinterpreting Sikh histor. He alleged that the money collected by Pehowa from overseas will be used for illicit purposes for the Baba's personal enjoyment.

Col. Sandhu criticized Jathedar Vedanti for not taking action against the Baba, and declared that Vedanti will one day have to face consequneces from the Sangat for his inaction in this matter.

Meanwhile, on a similar note, Bhai Sahib Singh and Dr. Gurvinder Singh Samra of the ‘Sikh Sangharsh Committee’ in a press conference warned that if the police authorities do not take any action against the rapist Baba, they will be obligated to take legal action against him in the courts.

Dr. Samra pointed out that Sadh Pehowa’s case had been pending at Sri Akal Takht Sahib for over a year and no action was ever taken. He also stated that Pehowa is misleading the public by claiming that he has been exonerated by the Sri Akal Takht Sahib.

Dr. Samra said that this rapist Baba has taken advantage of many gullible women over the past few years and that evidence against this Baba’s illicit activities is still on hand.

Bhai Sahib Singh and Dr. Gurvinder Singh Samra both stated that the Baba was hoping to utilize Parkash Badal’s political leverage and has asserted “that all will be OK when Badal comes to power in the forthcoming elections.”

Dr. Samra stated that on behalf of the Baba’s victims, the 21 member ‘Sikh Sangharsh Committee’ has filed complaints with the Director General of the Punjab Police, the Chief Minister, the Supreme and High Court Chief Justices, and Police Chief of Ropar, and are expecting action against the Baba to be initiated soon.

They also declared that the Committee will be organizing protests against the rapist Baba in the coming weeks in Nawa-Shehar, Ropar, FatehGarh Sahib, Amritsar, Gurdarpur, Ludhiana, and Ferozepur so the public could be made aware of his illicit activities.