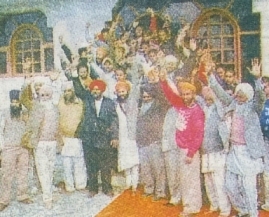 Kartarpur, Punjab (KP) – In an evident move to suppress the voices of the women who were victims of rape and battery at the hands of Pseudo-Baba Mann Pehowa, the polices forces of the Kartarpur district banned a peaceful protest organized by the Sikh Sangharsh Committee without having any warrant or justification to do so.

Panthic organizations have expressed outrage at this blatant move to ban their right to peaceful protest and said that this recent move by the Punjab police forces was yet another indication of the ongoing mockery of democratic law in the state.

As the police forces began to provoke the peaceful protestors, the organizers feared for the safety of the sangat and decided to conclude the rally at the Kartarpur venue. Despite the intimidation from the police, several of the leaders of the organization continued to present their views to the sangat. This was the second rally to be organized to bring about awareness of the crimes committed by Pehowa, but despite the police intimidation the victims and others present at the rally expressed resolution in their cause. 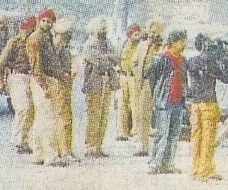 Dr. Gurwinder Singh Samra, Chairman of the Committee, expressed grief over the unwarranted police intervention. He said that even though the police was determined to suppress the voice of the Sikh Community, the truth about Mann Pehowa would be made known to sangat throughout the world, to ensure that no more innocent women become his victims. He declared that if the Punjab police do not arrest Mann Pehowa within the next ten days, the Legislative Assembly will be approached by the committee to ensure that justice prevails.

Dr. Samra also announced that because of the baseless police interventions in the committee's campaign to expose Maan Pehowa, the committee would change its strategies to accomplish the mission of bringing Pehowa to justice. The committee’s next step in exposing Pehova includes a village to village information and leaflet campaign. Dr. Samra also laid out many serious allegations against the pseudo-Baba while saying that proofs of over 35 rape cases are present with the committee.

Furthermore, he said that according to three recently discovered cases, followers of Mann Pehowa had forced three Sikh women who were victims of rape, to have forced abortions in a private hospital. Mentioning another case, Dr. Samra alleged that because of Pehowa's vicious actions, a 16-year-old girl is unable to get married. Samra also noted that 13 Sikh women who were victims of Pehowa are now actively working with the Sikh Sangarsh Committee to create awareness about his crimes and to ensure that other innocent women would not become his next target. Former 'sevadars' of Pseudo-Baba Mann Pehowa including Sahib Singh, Bikram Singh and around 15 others who left the self proclaimed ‘Sant’ after they came to know about Pehowa’s serious crimes have also joined the committee.

A spokesperson from Shahbaaz Khalsa reiterated the frustration that the peaceful protestors had expressed about the unwarranted and baseless suppression of the rally by the Kartarpur police. “This is nothing new for us, evidently this is a democracy only on paper, and Punjab remains a police state. Despite all of the evidence that the committee has gathered against this fraud, the police and government officials continue to grant impunity to Pehowa.

Indeed the Punjab police don’t have any trouble intimidating innocent protestors, but turn a blind eye when it comes to addressing the plight of the victims of rape.”