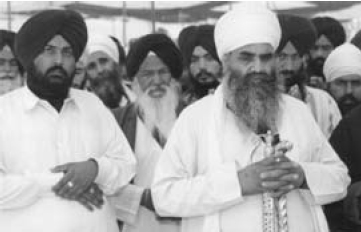 Kartarpur, Punjab (KP) - The Sikh Sangharsh Committee’s ongoing campaign to expose the misdeeds of rapist Saadh Mann Pehowa shifted into high gear this past week with the committee’s announcement of a Panthic conference to be held at the Desh Bhagat Yaadgar Hall, Jallandhar on February 15.

Committee chairman, Dr. Gurvinder Singh Samra stated that the primary aim of the conference will be to mobilize various Sikh organizations throughout the state to make a united stand against Pehowa. Prominent Sikh leaders, activists and scholars will be present at the conference where the sangat will be provided with in depth information regarding Pehowa’s serious crimes. 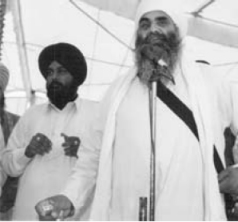 In a bold and unflinching move, Dr. Samra issued an open challenge to Pehowa, “If you are truly a ‘sant’ as you claim to be, then you should not be afraid to present yourself before the sangat at the conference to address these serious allegations. Let’s see if you can even look your victims in the eye. If you (Pehowa) are able to vindicate yourself of these serious crimes with concrete evidence I will personally come before the sangat to beg forgiveness and receive punishment. If you or any of your followers are a truly a Sikh, then you should have no problem taking the same stand before the sangat on February 15.”

Samra also provided an outline for the committee’s plans to launch a village to village information crusade to create awareness of Pehowa’s serious crimes to prevent more uninformed women from becoming the pseudo-saadh’s next victim. He stated that for the next 10 days an entourage of 12 vehicles has been reserved for the information campaign in which hundreds of thousands of anti-Pehowa leaflets and posters are being distributed across the villages of Punjab. He further stated that the entourage is being split into four sub groups so that the teams could easily fan across the same rural villages of Punjab in which Maan Pehowa has been duping the public for the last three decades. “The committee is doing everything in its capacity to get the word out to the rural areas of Punjab, where people do not have access to this information. Indeed most of Pehova’s victims have been young poor girls from villages whom he knew would be unable to speak out against him.”

At one time Dr. Samra was considered to be one of Pehowa’s closest friends. He had known Mann Sinh since his college days at Patiala Modi College (Multani Mal Modi College, Patiala.) Mann Sinh was enrolled in a BA program at the college while Samra was studying for his medical degree. The two continued to keep in touch after college and had become close friends over the last several decades. According to Dr. Samra, he broke up his friendship with Pehowa after he came to know about his serious crimes.

In an exclusive telephone interview with Manjit Singh, Dr. Samra gave a detailed account of his former friendship with the self-proclaimed ‘Sant’ and detailed how Pehowa had been of such low moral character even in his early days as a ‘preacher.’ Samra concluded the interview by noting how Pehowa and numerous other fake human guru’s in Punjab are misleading the innocent sangat under the name of Sikhi, and that it is every Sikh’s personal responsibility to bring these frauds to justice.

Editor's Note: Panthic Weekly feels it is of utmost importance to share the contents of Dr. Samra's telephone interview with our readers, since it is the most efficient way to disseminate his message to the Sikh community. We hope that with this information they can be forewarned to not fall into similar traps of these fake Saadhs. This information is being shared with the Panthic community out of genuine concern, and not for sensationalism.

Dr. Samra has agreed to personally answer anyone’s questions in regards to the allegations published in the press against Saadh Pehowa. The public is requested to contact him directly at : 9356000021 in Punjab, India.

Warning: Due to the nature of the subject, language in some of the audios is graphic - discretion is advised.

No simran, no bandagi : what do people find in this worthless man ?

Chemicals and medicines to remove hair from his body

Promises to take 5 Singhs with him to Sachkhand

How he brainwashed and seduced Bibi into serving him

Bibi from Patiala requests blessing of son; Saadh takes advantage of her

Visit to Jaipur Hotel, and spends Rs. 80,000 on call-girl, and makes up sakhi next day about converting 50 prostitutes into Singhnees

Truth behind Baba's claim that 138,700 individuals were administered Amrit on a single day

Trust and faith of his devotees (chelas)

Claims he did Bhagatee for Two Yugs : Tells Bibis they are related in his past lives, and Guru Nanak Sahib ordered their 'sanjog' in this life

Millions spent on Dera but no Darbar Sahib built in any of his Deras. Rapes and assault occur next to rooms where Guru Granth Sahib Ji is kept

Maan Pehowa fathered a baby with California Bibi. Dr. Samra challenges Bibi and Mann Sinh to get DNA test.
This Bibi is a close relative of one of Saadh's main supporters in California.
(Editor's Note: Name of this Bibi has been deleted from audio out of respect for her privacy)

More information on other Bibis assaulted by Saadh

Final Message from Dr. Samra's to the Sikh community