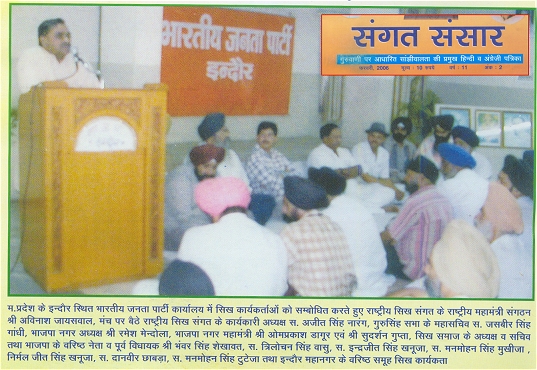 A photo from the RSS Magazine 'Sangat Sansar' of a BJP meeting in Indore in which Inderjit Khanuja and other pagridhari Hindus participated. They are the same individuals now launching seminars and conferences under the banner of "Guru Granth Sahib Vichaar Manch"

Evidently the right-wing extremist organization has expanded and developed its clandestine machinations aimed at homogenizing the Sikh, Christian, Buddhist and Muslim minorities into the Hindutva construct of one language, one religion, and one land of Hindus: Hindi, Hindu, Hindustan. Following the 2004 Hukamnama issued from Akal Takht Sahib which banned the terrorist group from participating in any Panthic functions, the ‘Sangh’ is now using more covert tactics to infiltrate the Sikh Panth.

GURSIKH, Shahbaaz Khalsa, and Akhand Kirtani Jatha, Indore recently issued a press release outlining how the right-wing militant organization is now working under the camouflage of counterfeit religious organizations using Sikh names such as "Guru Granth Sahib Vichaar Manch" to disseminate its anti-Sikh propaganda. They stated that a such a conference was organized several days ago in Indore by the RSS under the banner of Sikhi.

In a joint press release, the organizations indicated that individuals such as Ranjit Sinh Ahuja, Balbir Sinh Khanuja, Sevak Sinh Khanuja, Inderjit Sinh Khanuja, Ajit Sinh ‘Nihung’ were behind this nefarious RSS program. They also noted the high level of involvement from politicians such as Parkash Badal, Rajnath Sinh, and Atal Behari Vajpayee, key leaders of the BJP; the political party of the RSS, in this recent underhand operation.

A spokesman from Panthic organization Shahbaaz Khalsa commented, "Because the RSS has been banned from participating in Panthic functions since 2004, they now want to infiltrate the Sikh community using the guise of fake Sikh organizations. But, we will not allow this to occur. We won’t be Hindutva’s next victim, as long as there is a breath in our body, we will stand up to these extremist elements set on destroying our faith."

"The Sikh community is fully cognizant that the same extremist Brahmanic forces that have attempted to annihilate the Sikh nation via actions such as ‘Operation Bluestar’ and the November 1984 Anti-Sikh Pogroms, are also the driving forces behind terrorist organizations such as the RSS. Where in the past few decades, the primary objective of these Brahmanic forces was the physical annihilation of the Sikh Nation; the RSS has now coordinated with them to destroy the fundamental institutions and core-principals of the Sikh religion through other means.

In January 2001, the RSS organization made plans of holding Akhand Paths of Guru Granth Sahib Ji in various Hindu temples throughout India but directives from Akal Takht Sahib banning their participation helped preserve the reverence of Guru Granth Sahib at that time. After that, in July of 2001, the RSS distributed a magazine called "Pathe-ya-kan" in which gross historical distortions were made of the Sikh Gurus other Sikh figures. In response, several Sikh groups based in Indore organized protests where copies of this magazine were burnt in front of Gurdwara Imli Sahib. Under the guidance of the Gurdwara Sahib Sabha Management, it was also concluded at that time that "the Rashtriya Swayamsevak Sangh is neither Rashtriya (a national organization), nor Sikh, or Sangat." The Sikh Sangat of Indore was asked to refrain from purchasing any publications of this anti-Sikhi organization.

At that time, Ranjit Sinh Ahuja, Balbir Sinh Khanuja, Sevak Sinh Khanuja, Inderjit Sinh Khanuja, Ajit Sinh ‘Nihung’ and several others signed resignation letters from the RSS in the presence of Guru Granth Sahib Ji. But in August 2004, when the RSS organized five different marches in light of the 400th Parkash anniversary of Guru Granth Sahib to cause trouble and tensions within the Sikh community, these same people were once again seen taking active part in these marches. Ajit Sinh ‘Nihung’, Ranjit Sinh Aahuja and Jasbir Sinh Gandhi of Singh Sabha (Indore) also publicly vowed to hold L. K. Advani's commands superior to those issued by Akal Takht Sahib.

In response to the sacrilege caused by these marches, Akal Takat Sahib issued another hukamnama on July 23rd, 2004 and August 11th, 2004 asking the Sikh Nation to boycott the RSS and its organized programs. After the Takht mandate, there was a noticeable decrease in the anti-Sikh activities of the ‘Sangh.’ Now after a lapse of two years, this organization has re-launched its anti-Panthic agenda under the name of Guru Granth Sahib Vichaar Manch. All the leadership and agendas of this newly formed organization are the same as those of the RSS.

It is a request at the feet of the Sikh Sangat situated worldwide to not support any activities of any organization or individuals linked with the Rashtriya Swayamsevak Sangh (RSS). All Sikhs should abide by the mandates of Akal Takhat Sahib and boycott this anti-Panthic organization. Any Gurdwara Management Committee, organization or any leader found offering support of any kind towards the RSS should be immediately reported with the Akal Takht Sahib."