Broken Promises of Modern ‘Punjabi’ Politicians: Past and Present 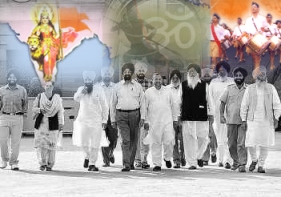 Amritsar Sahib (KP) – Ever since the partition of the Sikh homeland sixty years ago, history has been witness to the countless injustices and betrayals that the Sikh people have met at the hands of the hegemonic forces of Hindutva. And history also shows how time and time again, the modern ‘Punjabi’ politicians have been working in direct collaboration with these Hindutva forces to mislead the Sikh people with various deceitful tactics. Indeed from the Punjabi Suba Morcha of the 1960’s to the current ongoing Dharam Yudh Morcha, the so called ‘Punjabi’ politicians and their political parties have been at the forefront of the mission to swallow the Sikhs into the Hindutva mold.

Compiling a list of names of these corrupt politicians would be a long and arduous task, however there are those infamous characters such as Nakli Akali Parkash Badal who consistently mislead the Sikh people and whose reputation of corruption and deceit precede them and require little explanation.

Not surprisingly, Badal attempted to paint himself as a champion for the rights of the Punjabi people and narcissistically advertised himself as the ‘Sher-e-Punjab’ on build boards throughout the state. During his campaign, Badal and his party (B.J.P-political party of the RSS) made numerous promises to the Punjabi people. The party has been doing everything in its power to befool people into voting for them, by various means such as handing out free liquor, and visiting anti-Sikh deras. Due to rising inflation in the state, Badal offered a variety of spurious guarantees such as lowering the cost of flour, patrol, electricity and decreasing taxes. Of course history shows just how genuine Badal and the like are in fulfilling their ‘guarantees’ to the Punjabi Sikh people. After all, these are the same people who rub shoulders and collaborate with terrorist organizations set on destroying the Sikh faith, such as the RSS and the VHP.

It is paramount for the Sikh people living in Punjab and throughout the diaspora to note, how just in elections past, their central issues and demands have been negated and marginalized by the main political parties, mainly the Congress and the BJP. This should come as no surprise, as the Congress was responsible for organizing the carnage of 1984 and the BJP is an openly right wing political party aimed at homogenizing the religious minorities of the country into the Hindutva construct and is openly interfering in the affairs of the Sikhs through the RSS.

In the months leading to the elections, these ‘Punjabi’ politicians shouted slogans for social justice and equality, yet in complete contradiction, did not even mention the gross human rights violations that continue to plague the state. The issue of the illegal arrest of hundreds of innocent Sikhs following the arrest of Sikh freedom fighter, Bhai Jagtar Singh Hawara was not even mentioned by any political party.

To this extent, it is obvious that these politicians have endorsed a policy of silence and impunity to those responsible for the state sponsored terrorism that continues to plague Punjab to this day. Though when it comes time for elections, politicians such as Gurcharan Torha and Badal had promised the voters otherwise, assuring them that after winning the election they would have all of the Sikh youth rotting in the jails since 1984 freed. Indeed these so called ‘Punjabi’ politicians have made a habit of toying with the sentiments of the Punjabi Sikh community. The Sikhs were met with great tragedy following the Third Sikh Holocaust of 1984 where hundreds of thousands of innocent Sikhs were massacred in the June attack on Darbar Sahib, the November Delhi Anti-Sikh Pogroms and the genocide that ensued afterwards. Thousands of young Sikhs were made to disappear or killed in extra-judicial killings during the genocide and these modern day ‘Punjabi’ politicians such as Parkash Badal have only added salt to the wounds of Sikh people by promising justice to the victims and their families.

Despite all of these false promises, to date no senior politician or police officer has faced conviction or official government condemnation for their role in the massacres. And despite the victims pleas for justice, the perpetrators and organizers of the genocide have been granted judicial impunity by the Indian government. Since the victims have not been able to get justice through the Kangaroo Indian judiciary or through these politicians they have been forced to use other avenues of activism to highlight their demands for justice. Recently a group of widows from the Delhi Anti-Sikh Pogroms threatened to self immolate themselves to have action taken against the Congress leaders who participated in the killings. Due to the apathy and deceit on the part of these politicians to the gross human rights violations that struck the state in the past two decades, the victims are left to fend for themselves.

It is widely known that politicians like Badal who now refers to himself as “Sher-e-Punjab” Longowal and Torha were escorted away from Darbar Sahib during the 1984 attack to save themselves. While the Sikh people faced genocide, these traitors to the Panth were enjoying luxuries granted to them by the Indian Government. And now the same political parties that have been set on destroying the Sikh Panth are now seeking its support through these political puppets.

At one time, Punjab was considered an economic powerhouse thanks to the industrious nature of the Punjabi Sikh farmers, but the Punjab of today is an entirely different story. Today Punjab’s economy is in crisis; while the quality of education and the living standards are second rate in comparison with the rest of the country. Instead Punjab, the land of the Gurus, is infested with massive drug and alcohol consumption. In the past years the number of liquor shops has sky rocketed throughout the state; as has the amount of reported drug distribution. The once prosperous Punjabi farmers are now resorting to suicide as the Punjab

River waters are being diverted to neighboring states; in direct violation of international riparian law.

Indeed there have been drastic changes in the Punjab over the past few decades and certainly not for the betterment of the Sikh community. With widespread apostasy amongst the Sikh youth and the marginalization of the Punjabi language, the Sikh identity is being grossly denigrated in the state at the hands of the Hindutva machinery. The fact that these politicians even try to call themselves ‘Punjabi’ is a complete mockery given the fact that the majority of them are responsible for the ongoing marginalization of the Punjabi language. Sacred Sikh institutions such as Sri Akal Takht Sahib are under siege by modern day mahants such as Parkash Badal, yet they continue to trick people with their deceitful tactics.

The only promises that Badal and company are set on keeping is ensuring that the Punjabi Sikh people are deprived of their basic rights; including their rights to autonomy and self-determination. Within the next few decades Punjab is predicted to become a virtual desert, yet Badal and his party is set on diverting the river waters to neighboring states Rajasthan and Haryana, ensuring that the Punjabi Sikhs remain in a perpetual state of dependence on the central government.

To sum these so called modern ‘Punjabi’ politicians such as Nakli Akali Parkash Badal and his heir ‘Kaka Badal’ do not even qualify as being Punjabi, nor Sikh as they continue to deceive the Punjabi Sikh people with spurious promises and work against Panthic interests by working in collaboration with the RSS, Bajrang Dal, the VHP and other terrorist organizations. Under the leadership of such mahants, the only guarantee that the Punjabi Sikhs can believe is that this history of deceit and corruption will repeat itself, regardless of the victor of last week’s elections.