Outcry Over Arrest of 31 Sikhs at Anti-Pehowa Rally 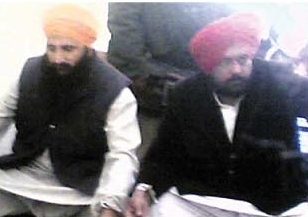 Handcuffed : Sahib Singh and Dr. Samra being escorted to a Court House

Phagwara, Punjab (KP) – In a blatant disregard for democratic law, the Punjab Police of the Phagwara district, illegally arrested and detained thirty-one Sikh protestors, including Dr. Gurvinder S. Samra, at an anti-Pehova rally this past week. The strong links between the police and the pseudo-sant were explicitly declared several weeks ago at a similar protest in Kartarpur, where peaceful protestors were harassed by the local police with aggressive intimidation tactics.

Following the arrest of these peaceful protestors, it has become unequivocally clear, that the Punjab police are collaborating hand in hand with Pehova and his cult members to suppress anyone who opposes Pehova’s unscrupulous activities.

Worldwide, Panthic organizations such as the Khalsa Alliance, and Banda Singh Bahadur Society, Sikh Students Federation, and others have condemned the illegal and unwarranted arrest of the protestors and have called for their immediate release. Witnesses to the incident indicated that the police came to the scene accompanied with an entourage of Pehova’s cult members who reportedly threatened the protestors with violent threats and verbal abuses. The protestors were then arrested on fraudulent charges which alleged that the protestors did not have the right to assemble without prior consent from the local authorities.

The police further justified this illegal action by alleging that Dr. Samra was violating the law by using a loud speaker, despite the fact that the delegation of Sikhs had gathered there peacefully and posed no harm to the public safety. Some vehicles belonging to Dr. Samra and his committee were also confiscated by the police, even though the city constitution does not bar the use of automotives in protests. The purpose of the vehicles in the rally was to aid in the distribution of flyers and pamphlets exposing the true face of the pseudo-Sant.

Several of the individuals arrested are former workers of Maan Pehova, including Sahib Singh, Tirlok Singh, Harmesh Singh and Avtar Singh; all who left him after coming to know about the numerous rape cases that Pehova faces both in Punjab and abroad. The elderly father of Dr. Samra was also amongst the arrested party. All of the thirty-one Sikh protestors are still being detained in the local prison and are facing external obstacles to their right to due process; a right that has traditionally been usurped by the Indian judiciary over the past few decades in the Punjab, where police brutality runs rampant 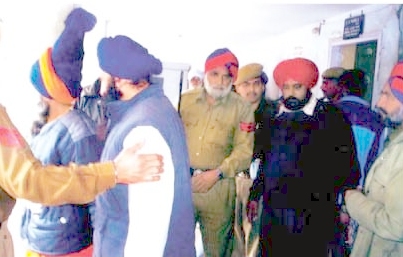 Sahib Singh and Dr. Samra, and others being escorted out of the Court House

Numerous cult followers of Maan Pehova gathered outside the court to intimidate and threaten Dr. Samra and the other protestors as they were entering the court. The verbal threats of violence from the Pehova camp caused the court to delay the proceedings until further notice. Several of the protestors asserted that as a result of the court’s incompetence in dealing with Pehova’s cult members, they were being denied their rights to due process under the law.

As leader of the Sikh Sangarsh Committee, Dr. Samra has played an integral role in organizing peaceful protests and marches throughout Punjab in a campaign to expose Pseudo-Saadh Pehova for his serious crimes; and to prevent more innocent Sikh women from becoming his next rape victim.

A representative from the Khalsa Alliance, reemphasized the necessity for immediate action against Maan Pehova and also commented on the wide-scale corruption within the Punjab police, “The unwarranted arrest of these peaceful protestors at the behest of Pehova is just another indication of the roguish and unscrupulous character which continues to define the Punjab police force. A state which denies its citizens the right to peacefully assemble in protest, is a disgrace to the name of democracy. Pehova might have tight connections with the Punjab police, but by the grace of Akal Purakh, the victims of his crimes will receive justice.”