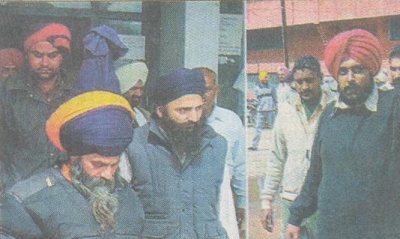 Dr. Samra (right), Sahib Singh (center), and other protestors continue to be held by the Punjab Police under fabricated case.

Phagwara, Punjab (KP) - At least six activists of the Sikh Sangharsh Committee and two family members of Baba Pehowa’s victims are languishing in various Punjab jails on fabricated cases. Their detentions are being orchestrated by the senior Akali leadership - allegedly part of a compromise reached between them and the Baba for his support during the elections.

The father and a close relative of one of the Baba’s victims was also arrested earlier this week. The pair was traveling in a car through Punjab on the Grand Trunk Road when they were stopped at a check point and arrested. They are being charged under the Indian Penal Code (IPC) 188, 295-A.

According to PW sources, the Police officials are pressuring the victim’s father to make a public statement in support of the Baba, and to have his daughter rescind the complaint against the Saadh.

In a statement issued to the press and sent to Punjab’s Chief Minister Parkash Badal, Dr. Samra stated that the Police were committing atrocities against the detainees. Many had been stripped naked, and cigarettes stuff in their mouths. He stated that the police had committed sacrilege to the sacred kakkars (articles of faith) of the detained Singhs.

Dr. Samra also alleged that the Phagwara Police in cooperation with the Babas’ followers attempted to physically harm the activists after a court appearance last week. Dr. Samra questioned the silence of the newly formed Akali Government, and requested them to live up to their election promises of reforming the repressive police system that was allowing the rapist Baba to roam freely, but instead was suppressing the voice of the victims.

The defiant Dr. Samra, again, challenged the Pehowa Baba to come out in the public and face the serious allegations against him. He stated that the 'sangharsh' (struggle) to bring the Baba to justice for his misdeeds would continue on, despite this temporary setback.