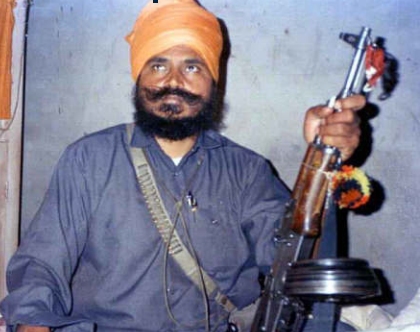 Baba Gurbachan Singh was becoming the head of a very powerful force and the people of Punjab were giving them all possible support. In the plains of Punjab, a guerrilla movement is almost impossible unless the people are willing to hide and shelter the fighters. Rural Punjab was almost completely under the control of the Singhs and the Indian Security Forces were afraid to even go near them.

Baba Manochahal was respected as being one of the wisest Generals in the movement. Baba Manochahal was very opposed to waste. When in an encounter, he would stay very calm and only fire when he was sure the bullet would be effective. He once said to Bhai Surjit Singh Behla, “In an eight hour encounter I fired a total of 150 rounds. You Singhs fire so many rounds for no reason at all.”

When once some Singhs of a different group killed a police informant and his entire family, Baba Manochahal met the leader of the group and said, “If he was an informant then you should have eliminated just him. Why did you kill his children..?”

Baba jee never killed a Hindu for just being a Hindu. He was completely opposed to pointless killing. In a meeting of Singhs Baba jee explained, “A child is born and then it takes at least 18 years for him to become a man. It cannot be called humanity to mow him down based on a decision made in just a few seconds. It’s important to give people at least three chances to correct themselves.

The government was becoming afraid that Punjab was slipping from their grasp. They decided to change the way in which the battle was being fought. New groups were formed under the direction of various police officers. These groups dressed like Singhs but went into villages to loot, rape and kill. After performing their disgusting deeds, they would shout Khalistan slogans and leave. The government also began to spread falsehood about Baba Manochahal that he was involved in rapes and looting and even that he had links to the government.

But all these stories were false. Baba jee always tread all women as sisters. Once the Singhs kidnapped a police officer and his wife in order to secure the release of some captured Singhs. When the police kidnapped or arrested Singhs’ women family members, they were abused with filthy language and often even raped. Baba Manochahal treated the police officer’s wife like a sister and when they couple was released, just like a brother sends away his real sister, Baba jee gave her a new suit.

Baba jee in the "Mansion"

The government itself had spread the rumor that Baba Manochahal had links with Buta Singh, a Congress Minister. It said that Baba jee was not being caught because he was staying in Buta Singh’s mansion and receiving shelter there. There was of course no truth to this. Baba Gurbachan Singh used to spend his nights in fields or families’ houses. He traveled by bicycle or by foot most often and lived a very simple life. Once it was raining and Baba jee was sitting in a sugar cane field. He had spread a plastic sheet over top, but it was beginning to leak. A Singh came to meet him and Baba jee laughed, “Welcome! Come and see Buta Singh’s mansion. Wipe your feet outside or you’ll muddy the rugs…”

Some attempts were being made at having unity between the different groups. But as is the case with all Sikhs, there were serious differences and the Indian government too had succeeded in some ways at creating distrust. There were whispers that perhaps Baba Manochahal really was a government agent and maybe he really did allow raping and looting. As the discussions were continuing, Baba Manochahal stood up and declared, “I, Manochahal, have been accused of a lot things. I’m a government agent, I’m a looter, I’m also friends with Buta Singh. Apparently I’ve bought a lot of land in UP (using the Panth’s money)…But I want to say that wherever you find this land, you can distribute it in the Panth. My fight is dedicated to Sant ji’s words and I won’t back down from that, regardless of whether my family is finished and my children are cut to pieces in front of me. If Banda Singh Bahadur could have his child’s heart put in his mouth, why can’t I? I also tasted the same Guru’s amrit. I could be accused of anything and I wouldn’t care. All I care is that my Kalgeeaa (n) vala is not disappointed with me…and then for all I care, the entire world can be angry.

One of the most famous battles in the history of the modern Sikh Movement took place in village Rataul. Baba Manochahal and some companions were staying in this village when it was cordoned off by the police. One Singh was resting a house, different than the one being used by Baba Manochahal, when the police entered. The Singh entered an underground bunker. The police became suspicious since a set of muddy foot prints could be seen leading to a corner and then mysteriously disappeared. When they went to the corner and moved a drum of flour, the entrance to the bunker became visible. Right away, the Singh inside opened fire and dropped the entire group. The cowardly Indians began to run in different directions and the Singh managed to escape from that house. Word was sent to Baba Manochahal that the village was surrounded and he should escape. Baba jee along with his body guard broke the cordon and escaped.

Inside the village, 5 Singhs gathered at a house where they had made a concrete bunker. They had decided to show the police what a real encounter was like. The army along with police divisions from Amritsar, Gurdaspur, Tarn Taran and Batala surrounded the area. The Singhs were well armed and had sniper rifles as well.

Place in Rataul where the DIG was shot down

A DIG of the police was trying to lead his men and give them courage to fight when the Singhs shot him dead. The loss of such a high ranking officer demoralized the already scared troops. The Singhs continued to bellow jaikarey from inside the bunker as they fought. Police officers attempted to pick up the body, but each time were forced to retreat under fire. The body lying there continued to demoralize them.

The Singhs fought for a total of 72 hours. The Security forces had lost so many men that it could no longer stand to fight anymore. They ordered a helicopter and had the bunker bombed. The five Singhs inside were all Shaheed but showed they showed the world that Guru Gobind Singh’s words “Sava lakh say aek laRaaoo(n)” are still true.

The Indian Centre ordered elections for Punjab on February 19, 1992. A group of Sikh fighters under the Panthic Committee headed by Dr. Sohan Singh ordered the Sikhs to boycott the elections. Baba Gurbachan Singh on the other hand wanted the Sikhs to take part in the elections and by electing Panthic Singhs, show that the will of the people was Khalistan. Once a Panthic government was formed in Punjab, it could pass a motion for independence and show that Khalistan was the will of the people. Even if such a government were dismissed by the Centre, the will of the people would have been expressed as being in favour of independence.

Baba Manochahl’s stand was criticized by many and Dr. Sohan Singh called him an agent of the government. Baba jee replied, “The time will come when the Panth will know who is a government agent and who is not. But that time is unfortunately not going to come any time soon.” Dr. Sohan Singh is still alive today, walking a free man on the streets of Chandigarh.

Some misguided fighters went so far as to attack Baba jee’s family in their home. Baba jee’s companions asked him to reply to this attack in kind but Baba jee simply said, “If they are making a mistake, should I make a mistake just like them too? The government already wants that we should fight and kill each other. Should we help the government by fighting each other?”

Baba jee kept encouraging the Sikh Movement leaders to not boycott the election saying that if they participated they would clearly win but if they did not, Baba jee said, “it’s like taking off our shoe and handing it over to our enemy to beat us over the head with. Singhs! Please don’t make this mistake…”

But short sightedness resulted in a boycott of the Punjab elections. Baba jee lamented, “The election boycott is going to have a deadly effect on us. It’s going to throw the Sikh Movement decades behind. Just watch, those people who today are considering it an honour to invite us to their houses are not even going to give us food when we ask them for it nor even open their doors when we knock. We’re going to be slaughtered, the Akali leaders are going to be thrown in prison, and the entire struggle will be setback decades. We’re going to boycott the elections and then we’re going to see the big pillars of our movement drop, one by one.” Baba jee’s words were nothing less than a prophecy of the bleak future.

The Congress and KP Gill

After the election, the new Chief Minister of Punjab, Beanta and the Punjab Police Chief, KP Gill had a meeting. Beanta made clear that the Movement should be finished at all costs. KP Gill said he could do the job, but he would need complete control over the police with no interference from anyone. No one should object to anything he did based on human rights or anything else. He could do the job, but it would be a bloody mess. Beanta agreed.