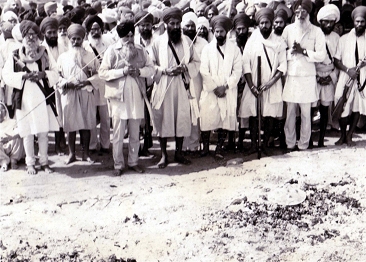 Panthic leaders, including Baba Jarnail Singh Bhinderanwale,
Bhai Joginder Singh Talwara, Bhai Amrik Singh at the site where
the Antim-Saskar of the 13th Shaheeds was performed.
Bhai Fauja Singh Ji's shield can be seen amongst the ashes

On 13th April 1978 the Akhand Kirtani Jatha gathered together from all over India at Amritsar to hold their yearly Vaisakhi Smagam. Kirtan had started from Amrit Vela and at about 10 o'clock a message was received. The message said that the followers of Nakali Nirankari Gurbachan Singh were holding a procession in Amritsar and were shouting slogans against the Satguru and shouting insults against the Sikh religion.

All the Sikh Sangat knew very well that the Nakali Nirankaris had been doing these things for the past few years. The Nirankaris had given degrading names to some GurSikhs including Mata Tripta Ji, Bhai Gurdas Ji, Bibi Nanaki Ji, Baba Budha Ji, Bhai Lalo Ji, Bhagat Kabir Ji. They called the Siri Guru Granth Sahib Ji a bundle of papers, and they called Kar Sewa, Bikar Sewa. The Nakali Nirankari leader said that Guru Gobind Singh Ji had made 5 Panj Pyarai, I shall make 7. Once he had even dared to place his foot on the Siri Guru Granth Sahib Ji

Bhai Fauja Singh heard the news from the loudspeaker when he was kneading the dough for the langar. He washed his hands and rushed to the congregation. He delivered a short speech, explaining the dire situation and drew a line, asking for those who are willing to receive martyrdom to cross it. Bhai Joginder Singh Talwara asked children and women not to go. However many "Bibian" still insisted on going. After performing Ardas, the Gursikhs bowed before the Satguru and went off to Ramdas Niwas.

Upon reaching Ramdas Niwas they found that the procession had finished. The Gursikhs then decided that they should go to the place where the Nirankaris had gathered and do a peaceful protest against the insults shouted at the Satguru. It is known that some of the Sikhs of the Akhand Kirtani Jatha and the Bhindra Jatha reached the Reego Bridge near Gobind Gar, where they were stopped by the police authorities. The Singhs told the police about the insults shouted at the Sikh Gurus and the Sikh Religion in the procession, and which were being shouted at their gathering, which was taking place at that time. These insults could be heard clearly from where they were standing. They told the police that they wanted to do a protest against the organisers of the gathering about the shouting of these insults. A police officer told the Singhs that he would go and stop the Nirankaris and for them to remain there. The police officer went to where the Nirankaris had gathered and the Sikhs waited for 30 minutes for him to return. On his return there were more policemen with him. Joshi D.S.P told the Jatha of Singhs to go back and that the meeting had finished a long time ago. But at that time violence provoking speeches could be heard on the loudspeakers. Then about 5-6000 uniformed Nirankaris rushed towards the 200-300 Singhs carrying rifles, guns, spears, swords, bow and arrows, sticks and within seconds attacked with stones, acid bottles, hand-made bombs, firing their guns and throwing spears. The Singhs that were hit with bullets fell on the ground and were butchered with swords, spears and axes. When the ground became covered with bodies of the dead and wounded, the police fired tear gas, but even that was towards the Jatha of Singhs, so the Nirankaris received even more help and the Singhs received even more injuries.

Dalbir Singh was a former communist who had devoted himself to trade union activities for more than a decade, and is one of many who believe that the Nirankaris had fought the Sikhs with a pre-conceived plan. At the time of the clash he was a correspondent of "The Tribune", based at Amritsar.

"It was 13 April 1978 afternoon. I had returned home from a routine beat of Amritsar. I was taking a nap after lunch when the telephone rang. Someone, who refused to identify himself, told me that several persons have been killed in a firing at the Nirankari convention. I rushed out to the stadium at the railway colony. There were many dead bodies that were strewn outside the venue of the convention. I did not yet know what had happened. I wondered around and met Govind Singh, a son-in-law of the Nirankari Guru, on the stage of the convention. Govind Singh first led me to a tent in which there were many armed persons. He entered it but immediately turned to lead me to another tent in which some Nirankaris were chatting with Deputy Superintendent of Police. I approached him and explained that I had seen some armed men who might have been the killers. The officer, however, ignored this information. The next day, the police searched the Nirankari center in Amritsar for the killers and their weapons. They had let the killers scatter, when they could still have been nearby, to catch scapegoats one day after the incident."

D.S.P Joshi was responsible for shooting Bhai Fauja Singh, and not allowing any of the GurSikhs medical attention. Eventually the police took the bodies of the "Shaheed Singhs" to the morgue, and some wounded Singhs were taken to hospital.

The astonishing thing is that the gathering of the Nirankaris continued for 3 and a half hours after this bloody massacre. It has also become known that the D.C of Gurdaspur Naranjan Singh I.A.S and other senior officers were present in the gathering during the killing of the unarmed Singhs. It is clear that the authorities of the Amritsar district allowed the Nakali Nirankaris to do the procession in the Sikhs main city Amritsar on Vaisakhi. The authorities are guilty of allowing the Nirankaris complete freedom and not dealing with them properly at the right time, and they should have been punished accordingly.

The government did make a Panel of Doctors for the post mortem of the dead bodies. It has become known that Mr Janjooha D.C ordered the post mortems of some of the Singhs to be done only by one doctor and the government orders were not carried out. The D.C was also involved with the Nirankaris.

The press also printed the news details of the incident incorrectly. The Singhs of the Akhand Kirtani Jatha and the Bhindra Jatha were called fanatics. Harbhajan Singh Yogi responded stating, "Today I read the newspaper report in which it was said, ‘ a body of fanatic Sikhs’. If doing kirtan and defending the good name of our father Guru Gobind Singh Ji makes us fanatics, then we welcome this allegation. Remember, those who do not defend the grace of their father are never worthy of respect on the earth. These martyrs of Amritsar have shown us that we shall live in grace; if it is not possible, we choose to die in grace."

The killing of the Jatha of Singhs by the Nirankari leader Gurbachan Singh was a very big crime. We ask where did these acid bottles, bricks, stones, guns, pistols, spears, swords and sticks come from? By giving the order to kill the Singhs, the leader of the Nirankaris Gurbachan Singh was the main guilty party of the bloody massacre and should have been punished severely for this according to the law. 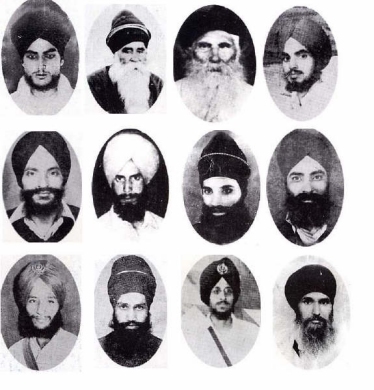 In this bloody massacre 13 Singhs were martyred and there were more than 70 wounded. Many of them left wives and children. The names of the 13 Shaheed Singhs are -:

The funeral of the 13 Singhs took place on Saturday 4/15/78 in front of Gurdwara Siri Ramsar Sahib in front of a large congregation of about 25-30,000 people. All the Shaheed GurSikhs were cremated together.