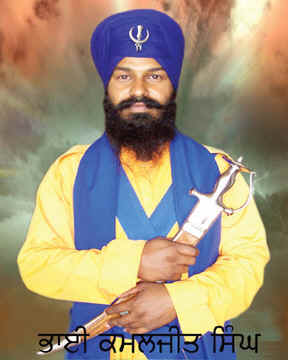 Bhai Kanwaljeet Singh was a Gursikh of very high caliber and was fully devoted to Sikhi. Bhai Sahib was serving as a member of twenty-one member executive committee of Bhai Ghaniya Ji Seva Dal (Reg) Sangrur. Bhai Sahib took an active role in religious programs held throughout Punjab with complete dedication and at numerous times, he was also included in the Punj Pyare at amrit sanchaars held in Sangrur. Bhai Sahib affectionately adorned the baana of Guru Gobind Singh Ji and at the time he was martyred, he was fully dressed in Gursikhi attire. 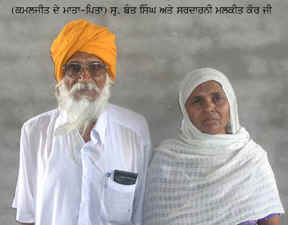 Parents of the Shaheed Singh

It is worth mentioning that on May 17, 2007, when Sikh Sangat of Sunam and Sangrur was returning from Damdama Sahib after attending the meeting held by Takhat Jathedars, several Dera Sacha Sauda followers challenged them at Mor Mandi. The Sikh Sangat was under the mandate of Akal Takhat Sahib to maintain peace, thus the calls of the Dera followers were ignored.

According to close associates of Bhai Kanwaljeet Singh – Bhai Manjeet Singh and Bhai Amritpal Singh, after returning to Sunam, the local Sikh Sangat approached Dera Sacha Sauda (Bathinda) to hold a peaceful protest. The main motive of the protest was to acquire an apology from the Sacha Sauda leader Gurmeet Ram Rahim. As a response, the Sacha Sauda followers threw glass bottles - some broken, while others filled with petrol (gasoline). Despite the mischievous response of the dera followers, the Sikh Sangat continued protesting while chanting ‘Satnam Waheguru’.

A few moments later, the actions of Sacha Sauda followers took a more violent turn as they started firing gunshots at the Sikh Sangat. As a consequence of the shooting, Bhai Balbir Singh was severely injured while Bhai Kamaljeet Singh passed away at spot after being hit in the chest.

Talking to the press regarding the killing of their son, parents of Bhai Kanwaljeet Singh said that they are proud as their son became a martyr for the cause of Sikh Nation. They asked the State and Centre Government to invest more interest in solving the situation as soon as possible as the rising number of deras in Punjab is a big concern for the Sikhs.