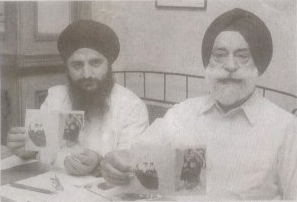 Chandigarh, Punjab (KP) – Panthic organizations were not too surprised by the recent news stories published by Dr. Gurvinder Samra in which he stated that the campaign he lead against the lecherous rapist Baba Maan Pehowa was a mistake and asked for forgiveness from the sadh for exposing his misdeeds.

The confessions of huge payoffs to silence Samra, and bribes and then threats to the rape victims and activists by the wealthy Baba have further tarnished the image of the Pehowa based deradar. Due to these allegations, the change of stance by Samra, was being received with obvious suspicion.

Initially, Samra’s u-turn was viewed as an uphill battle for Col. GS Sandhu of the Majha Human Rights Front and Sahib Singh, a former personal assistant to Baba Mann Pehowa, who for the past several years lead the battle against the perverted Baba single-handedly. Yet, the about face by Samra has really worked in Col. Sandhu and Sahib Singh’s favor.

This past week, a press conference was organized by Col. GS Sandhu in which Sahib Singh also took part to reveal the realities of the lecherous Saadh. Both addressed the press and disclosed damaging information about Samra’s change of heart and other facts attached to it. In addition, severaaudio recordings revealing the true intentions of Samra were also released to the press.

In the audio recordings, the original plan by Dr. Samra comes to light along with further mortifying information on Baba Mann Pehowa. In the recordings, Dr. Samra is heard disclosing to one the rape victims that his motivation to join this crusade was derived from the fact that he could later ruin the campaign by Col. Sandhu and ask for huge sums of money from Baba Mann in return.

In addition, Dr. Samra discloses “it becomes easier to seek money after the case has been registered in the court as then you can simply ask for sums as high as 40 or 50 lakh. If you ask for money in the beginning, you don’t get anything. I am well aware of these things. After the case is registered, everyone praises you. You [can also] go to foreign countries to amass donations. Haven’t I done just that?” Baba willing to pay any amount to get the case withdrawn

Dr. Samra then discloses that Baba Mann had personally paid him a visit seeking negotiation. According to revelations by Dr. Samra, Baba Mann is willing to pay any amount to get the case withdrawn. It is also learnt that some inspector named Darshan Singh of Thana Sadar of Jalandhar Tehsil also visited Samra in relation to the case. Later, Dr. Samra reveals his intention of obtaining at least a ‘crore’ (Rs. 10,000,000) from Baba Mann Sinh.
First Bribes and then threats from Baba camp to Rape Victim

While the above findings clear the doubts raised from Dr. Samra's reversal, Col. Sandhu had more to reveal about Baba Mann Sinh’s money-powers. Col. Sandhu told the press that the girl from Batala whose statement is included in the writ filed with the high court, has been receiving threats from the men of Baba Mann Sinh. The family of the girl has been lured by money or threats of serious consequences and her fimly has been visited by the Baba’s men several times.

The rape complaint was registered in the Punjab and Haryana High Courts under the petitions number CRMN 19385-M 2007, and is to be heard by Justice Ranjit Singh. A motion by the courts against the local Police their inaction against Pehowa Baba was initiated for the 24th of September, 2007.

Sahib Singh also disclosed that several lawsuits have been launched against him in order to keep him from supplying any information in the case of Baba Mann Sinh. While showing receipts of hospital admittance, Sahib Singh told the press that Dr. Samra had performed abortions on women victimized by Baba Mann Sinh. Later, after coming under the lure of financial gains, he joined the campaign with Col. Sandhu and then withdrew his stance when the time seemed appropriate.

Col. Sandhu held that it is because of backstabbers such as Dr. Samra that the Sikh Nation will not succeed and free itself from the clutches of pseudo-saadhs. According to Col. Sandhu, Baba Mann Sinh went so low to protect himself, he conspired to get Sahib Singh intoxicated using illicit drugs without his knowledge and then attempted blackmail him using staged pictures when Sahib has become unconscious. He alleged that Baba Mann Sinh will receive the due response in accordance to legal formalities.

Just at a time when the Sikh Nation has taken strong notice of Gurmeet Ram Rahim’s outrageous acts, Col. Sandhu and Sahib Singh also presented a picture of Baba Mann Sinh dressed up in a fashion similar to that of the tenth master. Col. Sandhu also unveiled that although he had submitted a plea with Akal Takht Sahib on Augsut 13th of 2006 to summon Baba Mann Pehowa, Baba Ajit Singh Nirmal Kutia Johlan, and Baba Daljit Singh Chicago, but no actions have been taken so far by the Takht Jathedars who consider the matter not important in nature.