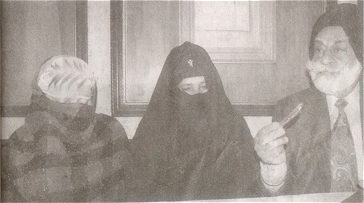 Col. Sandhu with Pehowa rape victim and her mother

Chandigarh, Punjab (KP) – In a press conference held jointly with the Majha Human Rights Front, a former devotee of 'Baba' Maan Sinh made serious allegations against the Pehowa based pseudo-saadh. The former follower of the Baba who appeared in front of the press alleged that Maan Pehowa had sexually abused her in his Jallandhar dera on March 15, 2006.

According to the press statement by the 24 year old victim, a complaint was filed with the Sadar Police Station in Jallandhar on March 18, 2006 against the Baba after she was raped, but the police took no action. Later, a case was filed in the Punjab and Haryana High Court which is currently pending a ruling. In the mean time, the Sikh woman has asked for police protection, as she, along her with family members, have been intimidated by followers of Maan Pehowa. 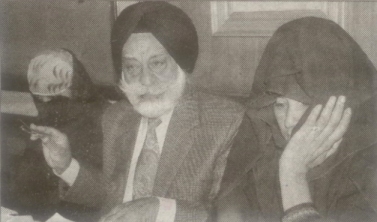 The Sikh woman, from the Gurdaspur area, has claimed that Maan Pehowa's men have visited her house several times and offered several incentives to withdraw the case from the High Court. According to the press statement, the woman was recently forcibly taken to Himachal and threatened to take back all of the allegations against Baba Maan.

Col. Sandhu, Chairman of the Majha Human Rights Front, has alleged that a complaint was filed on behalf of the victim with the IG, Border Range, of Amritsar but no actions were taken against the Baba. In addition, Jathedar Vedanti also gave a blank slate to Pehowa Saadh without considering the appeals presented by the Front. Col. Sandhu has also appealed to the police to provide the Sikh woman with security.

The woman's mother was also present at the press conference. It was alleged by the mother that mobs sent by Maan Pehowa have also threatened her and her husband on several different occasions.

Col. Sandhu further stated that besides the victim from Gurdaspur, three other women have also recently accused the Baba of sexually abusing them. Although the names of all four women were given in the press conference, Panthic Weekly has decided to keep their identity a secret for their protection. Col. Sandhu told the press that after being abused, one of the women left for Canada, the second is currently living in Orissa, and the third in the United States.