Exposé : Hindu Infiltration of Sikh Institutions at the Highest Levels

New Delhi - Panthic Weekly has published a number of exposes detailing the association of several world renowned Sikh parchariks and Sikh organizations with the leadership of the right-wing Hindu terrorist organization, the Rashtriya Swayamsevak Sangh (RSS). Well known Sikhs like Giani Thakur Singh, Prof. Manjit Singh, and Prof. Prem Singh Chandumajra of the Shiromani Akali Dal (Longowal-Badal) are all involved. Interestingly, the RSS has openly declared that Sikhs are part of the larger Hindu community, and that the Sikh Gurus are a continuation of the greater pantheon of Hindu Avatars, yet our shameless leaders continue to justify their links with these anti-Sikh elements. 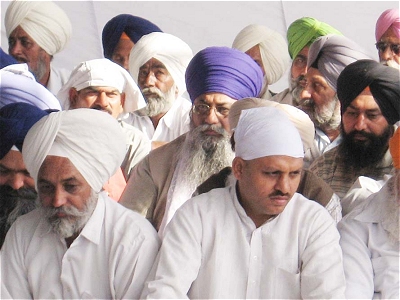 Panthic Weekly (PW) originally published a string of articles under the RSS Woos Khalistanis/Sant Samaj series in early 2006 depicting the depth of the involvement of Sikh leadership with various pro-Hindutva organizations. Since then, our news staff has come into possession of more credible evidence that not only proves beyond any doubt the collusion that is happening within our corrupt leadership and Hindu supremacist organizations, but also reveals that the tentacles of India's Brahmin masters have successfully reached into the very innards of Akal Takht Sahib--controlling all those who are in its path.

As the fascist Rashtriya Rashtriya Swayamsevak Sangh (RSS) organization realized that it was no longer possible to intermingle with Sikh leaders under the RSS banner, they have created offshoots such as the Rashtriya Sikh Sangat, Guru Granth Sahib Vichar Sanstha and Prerna.

Prerna : RSS by another name

The Prerna organization was created by the RSS with one thing in mind: To blend, muddle and taint Sikh practices and ceremonies into the folds of Brahmanism.

One of the promoters of Prerna is an individual associated with the company MDH (a worldwide spice manufacturer) who is also the key promoter and advertiser of 'Sacchi Sikhsha', the official monthly magazine and the daily 'Saach Kahoon' of the Gurmit Ram Rahim Sacha Sauda Cult. 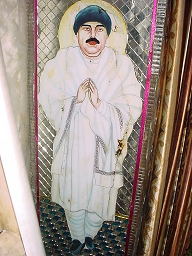 An image of Chaman Lal at Jejal Ram's Ajadpur Mandir, where he is worshiped as a Hindu devta

The well known Bhai Chaman Lal of Delhi (now referred to as Bhai Chamanjit Singh Lal) is one of the main organizers of Prerna. PW is releasing photographs of a September 2006 Prerna function in which Chaman Lal openly inter-mixed Sikh and Hindu practices. 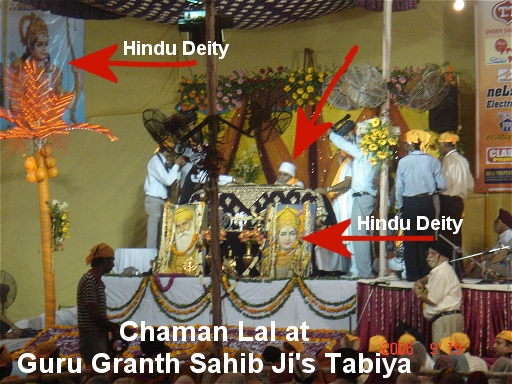 Note large pictures of the Hindu deity Ram Chander placed in front of Guru Granth Sahib Ji and on back wall along with an image of Guru Nanak Dev Ji.

Scarves of 2006 Prerna attendees with Sikh and Hindu Symbols

Note attendees wearing orange scarves with the the sacred Sikh Khanda and Ek Oangkaar along with the Hindu OM. 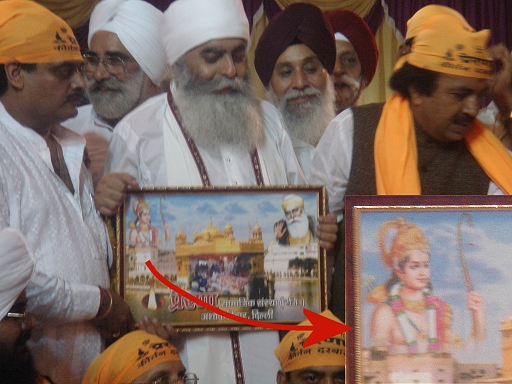 In 2001, the Badal installed Jathedar of Sri Akal Takht Sahib, Joginder Singh Vedanti, demanded clarification from Chaman Lal for performing at a Hindu Mandir known as the Sanatan Dharam Mahvir Temple in New Delhi. At that time Vendati described the act of performing Kirtan at the mandir with images and idols of Hindu deities of Shiva and Hanuman as anti-Panthic and in gross violation of the Sikh Maryada.

Interestingly, Chaman Lal received nothing more than a slap on the wrist for performing Gurbani Kirtan in front of a 70 foot tall statue of Hanuman at the Mandir, and more surprisingly Chaman Lal was allowed do Kirtan at Sri Darbar not too long afterwords, arousing the suspicions of various Panthic organizations who were familiar with the Chaman Lal controversy. It should be noted that SGPC still doesn't allow Gursikh Bibis to do Kirtan at Sri Darbar Sahib, yet individuals such as Chaman Lal are allowed.

Prerna 2007 : The Takht Jathedars Join In

Were the SGPC, Akal Takht Management and Chaman Lal all in this together? This year, this question has been finally answered. Chaman Lal and the Prerna organization took a bold step and invited Akal Takht Sahib "Jathedar" Joginder Singh Vedanti, along with Sri Darbar Sahib Head Granthi Giani Gurbachan Singh, and Keshgarh Sahib Jathedar Tarlochan Singh to their October 2nd function in Delhi.

Shockingly, these so-called Panthic Jathedars accepted the invitation and went to Delhi to attend this function in which rampant disrespect of Sri Guru Granth Sahib Ji and the Sikh maryada openly occurred. 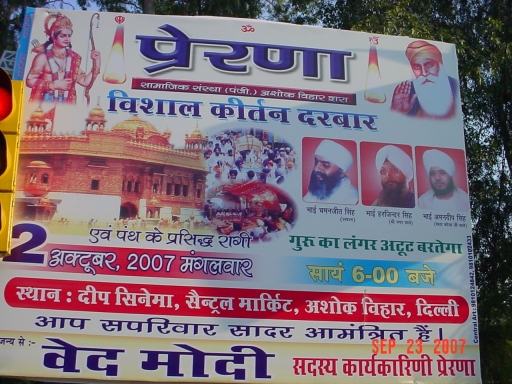 2007 Prerna Billboard with Ram Chander and the Hindu Om symbol

The outside entrance of the function has large lighted OM and Trishul Hindu symbols along with an Ek Oangkaar , clearly indicating that something was wrong at this function. The Jathedars ignored these warning signs, and went on to participate in this pro-RSS function. 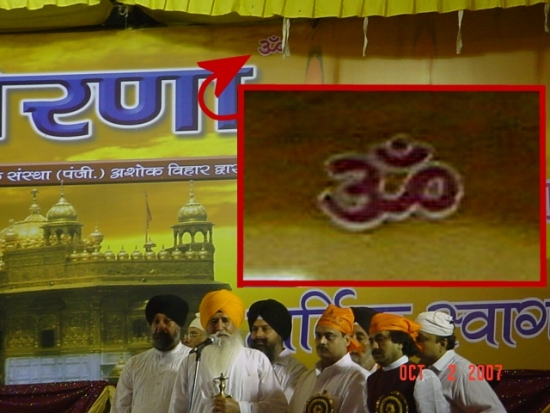 Note Prerna sign with an OM symbol behind Vedanti and Chaman Lal's Jatha. 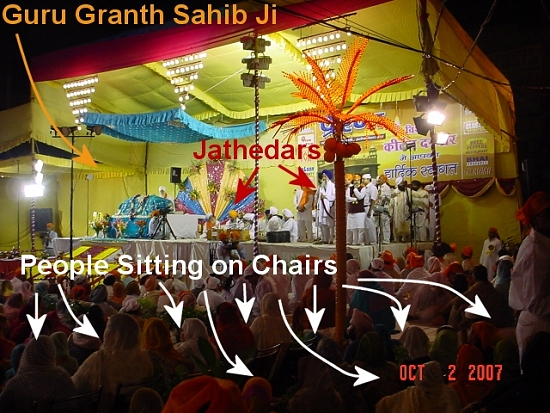 2007 Prerna attendees sitting on chairs in the presence of Guru Granth Sahib Ji, a blatant violation of Sikh Maryada.

The 2007 souvenirs presented by Chaman Lal to VIP guests including Vedanti, Giani Gurbachan Singh and Tarlochan Singh including a lighted scrolling picture of Guru Nanak Dev Ji with Hindu deity Ram Chander. These Jathedar shamelessly accepted these Hinduized mementos from Prerna in the presence of Guru Granth Sahib Ji. 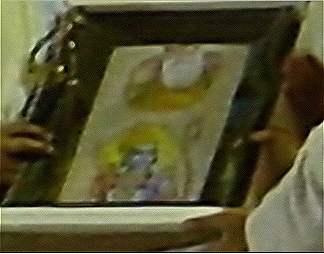 Zoom of Hindu Deity Ram on 2007 Prerna souvenir to Vedanti

Another interesting angle to this story is that the stage secretary for the 2007 Prerna function was Ravinder Sinh Khurana, who is ex-general secretary of the Delhi Gurdwara Management Committee, and a member of Akali Dal (Badal). PW has also learned that the RSS holds weekly shaksha meetings at Ravinder Khurana's residence in Delhi.

When PW article Illustrated: Hinduization of Sikh Faith & History and the video 'Tabe Ross Jageo' were disseminated in 2005 there was large scale outrage in the Sikh community when they learned how the RSS was mixing Sikh and Hindus symbols in order to brainwash Sikhs and water down the religion.

Two years later, it is now our so-called Jathedars and Parchariks who are violating Sikh tenants and promoting the mixture of Sikhi with Hindu idols and deities.

How can our Jathedars and Singh Sahibs even attend functions where chairs are placed in front of Guru Granth Sahib Ji? Why did they not protest the placement of Hindu images plastered across the venue?

We have come a long way from the days of Akali Phoola Singh Jee who stood up to the emperor of Punjab, Maharajah Ranjit Singh, and ordered him 50 lashes punishment. Now our "Jathedars"--who are such only in name--run around like leashed puppies in the hands of their Hindu masters.

They have forgotten the sacrifices made a century ago, the Sikhs who gave their lives to free Darbar Sahib from Brahman Mahants who put up their idols in the holy shrine. This is the agenda of terrorists like the RSS who know Sikhs would never allow them to take Darbar Sahib and install their idols. Instead, they brainwash Sikhs and whitewash history until the Sikhs themselves install the idols for them!

Jathedars are supposed to represent the Panth, they do not command it, they are servants of the Guru. When a Jathedar no longer serves the Panth or the Guru they are no longer a Jathedar. While these puppets, who were installed by the Government with the support of Hindu supremacists, are called Jathedars in name, they are truly traitors to their position and to the Sikh Panth worldwide.

Wake up! It is time to oust these frauds! the Sikh Panth should be run by Sikhs for Sikhs, independent of any government or the interference of another religion pushing its beliefs on us.

We don't need a Jathedar who one day is worshiping at the tomb of a dead Saadh, the next day helps hand out images of Hindu deities under a banner of Ram Chander and the next is busy at the feet of the Chief Minister.

Sender IP identification :35.172.203.87
By clicking on the 'Submit' button, you agree to the following conditions: