Ragi Fails to Show Up for Challenge at Takht Sahib; Banned from Panthic Stages 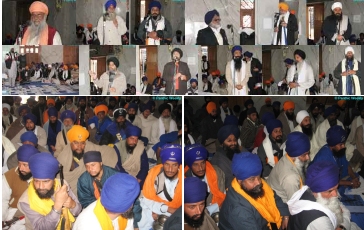 Takht Sri Damdama Sahib, Sabo-ki-Talwandi (KP) - At a historic convention, attended by representatives and scholars from dozens of prominent Panthic organizations, unanimous resolutions were passed condemning the recent ramblings by the controversial ragi Darshan Singh in which he had outrightly rejected the Bani of Guru Gobind Singh Ji.

The conclave was organized by Panthic organizations at Takht Sri Damdama Sahib, Sabo-ki-Talwandi on January 31st. The organizers had invited ragi Darshan Singh and his supporters to come to the venue to openly discuss the issues and concerns that they had over Dasam Granth with learned Sikh scholars in a civil manner. Past directives from Sri Akal Takht Sahib strictly forbid unnecessary criticism and debates on Dasam Granth, but allow the option for Panthic scholars to respond to those criticisms.

As expected, ragi Darshan Singh failed to show up for the discussion at the Takht Sahib convention. Instead, he took out a paid advertisement in a fringe newspaper further condemning the Dasam Granth and touting that even the validity of certain Nitem Banis (daily prayers) are in question.

These types of statements by the ragi have incensed Panthic organizations who attest that the Nitnem Banis written by Guru Gobind Singh Ji are a vital part of the Sikh Panth's Rahit Maryada and do not need any debating by such faithless cynics. They criticized Darshan Singh for not showing up for the Panthic challenge, and labeled him a mere ‘paper tiger’ and hollow puppet of anti-Sikh forces.

While the conference was open to everyone from all sides of the Dasam Granth debate, not a single representative from the ragi camp showed up for the challenge--proving that they could not discuss these issues with the Sangat face-to-face. Scholars present at the conclave brought more than 150 historical and contemporary references in support of Dasam Bani, just in case the cynics wanted to review the material themselves.

During this convention, the following resolutions were passed by the Panthic organizations under the aegis of the Takht Sri Damdama Sahib :

1) All Panthic Jathebandis and Sikh Scholars present at the convention held on January 31, 2008 at Sabo Ki Talwandi denounce the efforts of Prof. Darshan Singh Ragi to malign the status of Sri Dasam Granth.

2) The convention feels that by not attending the debate, Prof. Darshan Singh has accepted his defeat in the challenges posed by Panthic Jathebandis. His absence from the conference proves that he is promoting wrongful propaganda against Sri Dasam Granth Sahib. This further exposes the double standards of Prof. Darshan Singh as in past he has released various recordings of shabads from the Sri Dasam Granth. Such hypocrisy remains a mystery for everyone.

3) The convention held today appeals to the Sikh Sangat residing in Punjab and foreign countries to refrain from communicating with such selfish ‘preachers.’ It is also being pressed that the Delhi Sikh Gurdwara Management Committee refrains from allowing such charlatans to convey misinformation from Gurdwara Sahibs.

4) Sikh masses present at the convention are open to discuss the contents of Sri Dasam Granth with individuals ignorant on the topic at any time in future.

The Sikh organizations requested that the controversial ragi not be allowed to utilize Panthic stages at any Gurdwara Sahib worldwide and have also further requested that he be summoned by Sri Akal Takht Sahib for his blasphemous behavior.

Speakers and Scholars at the Convention

More than a dozen scholars from various Panthic organizations spoke on this occasion, in support of Guru Gobind Singh's Bani,. Universally, they condemned the ragi's recent comments on Dasam Bani, and requested action be taken by Sri Akal Takht Sahib according to Panthic norms and guidelines. 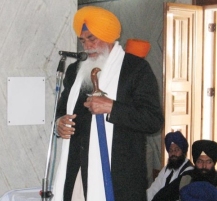 Jathedar Giani Balwant Singh Nandgarh (Takht Sri Damdama Sahib) - Jathedar Balwant Singh was the first speaker to address the conclave at this historic Takht. He declared that ragi Darshan Singh’s use of derogatory language against Dasam Granth would not be tolerated by the Panth, and then gave permission for the scholars to address the Sangat.

Bhai Gopal Singh (Swami Brahdev) - In his speech, Bhai Sahib took exception to ragi Darshan Singh misquoting the Gurbani of Gur Ram Das Sahib Ji in a recent advertisement where he refers to those who believe in Dasam Patshah’s Bani as lost manmukhs. Darshan Singh had paid the ex-communicated Spokesman newspaper editor Joginder Sahney to print an advertisement in which certain Gurbani panktis were misquoted. Bhai Gopal Singh then shared the real interpretation of those panktis with the Sangat and stated that it was individuals such as Darshan Singh who are misguided and not the Sangat.

He then shared verses from Bachittar Natak and Chritropakyan with complementary verses from Sri Guru Granth Sahib Ji that have the same central theme and message. He concluded his lecture, by listing the names of scholars and intellectuals with university degrees in connection to Dasam Granth from various universities.

Note : Bhai Gopal Singh’s is often referred to as Swami Brahdev, which was his original name. He took Amrit at Sri Akal Takht Sahib during the 1980’s on behest of Baba Avtar Singh of Badhni-kalan when Darshan Singh was the acting Jathedar.

Giani Sher Singh Ambala also made a startling allegation that during the 1980’s ragi Darshan Singh used to recite Kirtan in a style that would appeal to the youth so they would join the Kharkoo Singhs (freedom fighters) of that time, and then used to report information about those youths to the intelligence agencies and the police.

Bhai Ratinder Singh Indore (GURSIKH Organization) – Bhai Sahib presented Hukmanas from Dr. Ganda Singh’s famous book “HukamNamas” which refer to Bhai Gurdas Ji II in at least three HukamNamas. Ragi Darshan Singh has repeatedly stated that Bhai Gurdas Ji II has never historically existed. Bhai Sahib also stated that the notion of labeling Dasam Granth as an RSS granth is truly irrational. Bhai Sahib stated that Krishan in Krishana Avtar is referred to as a keet (insect) and shown as a characterless drug addict. In Rama Avtar, Ram is shown in a similar manner along with being a ruthless and merciless king who eliminated his rivals by any means possible. Why would the RSS promote a Granth that is so critical of these demigods, Bhai Sahib questioned.

Bhai Sahib further stated that it is the RSS who truly wants the Sikhs to reject Dasam Granth, since it is harmful to them not to us. It is the critics who are the ones that are pleasing to the RSS. He noted an example of the ex-communicated writer Bhag Singh Ambala who also wrote against Dasam Granth. Bhag Singh Ambala was a known admirer of Krishan, and after reading Krishana Avtar, Bhag Singh complained that Guru Gobind Singh Ji would never write anything against Krishan, so this could not be His Bani.

Bhai Gurbakhsh Singh Mohali - Spoke on the technical aspects of Dasam Granth, the numbering of verses, and many missing portions. Bhai Sahib queried that if the Dasam Granth was the work of ‘Brahmins’ then why did not those clever Brahmins give us complete scriptures? It is an historic fact that Bhai Mani Singh Ji compiled the works of Guru Gobind Singh Ji into a single volume, and noted that some portions were not available or missing, due to the loss the Panth incurred during the evacuation of Anandpur Sahib.

Dr. Anurag Singh - Noted that some of the stories mentioned in the charittars have also been mentioned in Islamic and Sanatan scriptures, and therefore have a historic basis. They have been presented in Charitropakhiyan for guidance purposes. In a dare to test his actual knowledge on Gurmat, Dr. Anurag Singh challenged that if ragi Darshan Singh is a true scholar then I request him to accurately identify 11 differences within Yoga and Sikhism as referenced in the 27,28,29,30 pauris of Japji Sahib.

Baba Baljit Singh Damdami Taksal (Dadu Sahib Wale) – Bhai Sahib also spoke on the glory of Dasam Granth and chastised those who are challenging it’s authenticity. He requested that strict action be action against those individuals.

Videos of all speakers will be uploaded in next week’s issue.