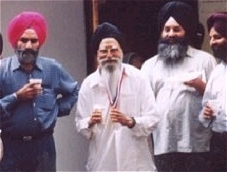 Brampton, Ontario (KP) - In another move by naastic elements, hurting the Sikh community's sentiments, Gurtej Sinh (IAS)—who in June of 2003 awarded ex-communicated heretic Gurbakhsh Kala-Afghana a “gold” medal for his blasphemous writings against the Sikh Panth—went on a Canadian public radio station and called Dasam Granth a “gund da tokra” (literally a ‘garbage can’) that should be thrown out in the trash.

Transcription of the comments in which Gurtej states that Dasam Granth (which includes the Sikhs' Nitnem and Amrit Banis) is trash and should be thrown away:

This so-called ‘professor of Sikhism’ was invited on Nirvair Radio which was aired on Toronto’s CJMR 1320 AM last week by Balwinder Singh and Amrik Singh Mukatsar to speak on the topic of Dasam Granth. According to local sources, Nirvair Radio was warned not to air guests that would criticize the Bani of Dasam Patshah, as there was a HukamNama from Sri Akal Takht Sahib forbidding such criticism by labeling them as “shararteee ansar” (mischievous elements).

Interestingly, Nirvair Radio management went ahead and interviewed the controversial guest, who spent over 45 minutes criticizing the Bani of Guru Gobind Singh, and openly referred to Guru Ji's compilations as “gand da tokra.” He insisted that the Sikh community should throw it (Dasam Patshah’s Bani) out immediately.

When asked what he thought about the sacred Sikh Nitnem Banis that were part of Dasam Granth, the so-called ‘professor of Sikhism’ stated that according to his knowledge the Nitem Banis were all contained in the beginning angs of Guru Granth Sahib Ji, which is untrue.

Another reason members of the Sikh community were perturbed by Nirvair Radio is that neither the host Balwinder Singh nor his guest, Amrik Singh Mukatsar, openly condemned Gurtej Sinh’s offensive comments. Instead, host Balwinder Singh merely remarked that he disagreed with Gurtej Sinh’s use of those words, but at the same time he was welcome ('mubarak') to make such comments. He continued to refer to Gurtej as a scholar and thanked him for being on his talk show. Some community members have complained to the local Better Business Bureau that the talk show has hurt their religious sentiments, and that stringent action be taken against the broadcaster, Nirvair.

Khalsa Alliance, an organization that is familiar with Gurtej Sinh’s past anti-Panthic activities, issued a statement condemning Gurtej Singh’s comments and blasted the Nirvair Radio management for even allowing such individuals on their show. “Gurteja [Gurtej] has a long history of anti-Panthic activities, and this is just the latest. He, along with the Nirvair Radio management needs to publicly apologize for airing such hurtful remarks against Guru Gobind Singh Ji’s Bani and our sacred Nitnem. We ask all Sikhs to severe ties with Gurteja, unless he apologizes for his blasphemous comments.”

KAC distances Itself from comments

Gurtej is also a legal advisor to the Khalsa Action Committee (KAC) , and has represented the KAC on many fronts. While speaking to Panthic Weekly, KAC convener, Bhai Mohkam Singh attempted to distance the KAC from Gurtej's on-air comments, and stated that he (Gurtej) only represented the Committee on a legal basis, and his views were not necessarily endorsed by the Action Committee. Bhai Mohkam Singh, refused to discuss the controversy any further and ended his conversation with PW abruptly.

This is not the first time Gurtej has insulted the sacred Bani of Guru Gobind Singh Ji. In 2004, he referred to Dasam Patshah's Chaupai as "koor-kabarr" (trash) during a debate between Sant Sipahi Magazine editor Gurcharanjit Singh Lamba and himself.