RSS and DSGMC Head Sarna Honor each other 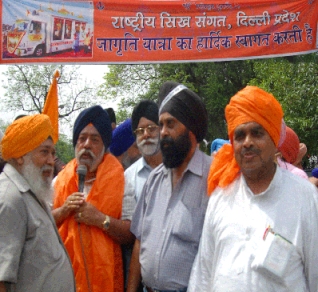 New Delhi (KP) - Despite a Panthic boycott and general morality, the head of the Delhi Sikh Gurdwara Management Committee (DSGMC) and the head of the controversial Rashtriya Sikh Sangat (RSS) outfit honored each other at a recent function in the Capitol.

According to press reports, Ujjagar Sinh, president of the Rashtryia Sikh Sangat (RSS) Delhi unit, and Paramjit Sarna of the DSGMC approached a stall setup by the RSS during the Guru Granth Sahib Jagitri Procession and praised the right-wing organization’s efforts and sewa. Ujjagar Sinh also stated that the RSS workers at the stall then honored Sarna with a siropa.

He claimed that the entire event was recorded by RSS workers, including the conversation in which Sarna stated that they are not Rashtriya Sikhs but Guru-kay-Sikhs. In response the RSS President replied, “we are Guru-kay-Sikhs. We are Guru-ki-Sangat. The word Rashtriya is just part of our organization’s name.”

The RSS representative went on to say that the RSS gives precedence to Gurmat, and only recognizes Shabad-Guru as our real Guru, and that their organization is attempting to rise above diminutive issues and spread the message of the Gurus and their sacrifices to rest of the world and to “each and every household.” In actuality, the right-wing RSS propagates the idea that the Sikh faith is an extension of the greater Hindu pantheon, rather than recognizing it a independent faith.

According to an official RSS press release Sarna also stated : “The workers of Rashtriya Sikh Sangat are very dedicated and they played a very positive and impressive role during [the] last six days of Jagriti Yatra. I pray before Guru Sahib and do Ardas for them. In [the] future Guru Sahib will give them strength for this noble cause of Sewa (Service)."

It should be noted, that in a memorandum released in July of 2004, Sri Akal Takht Sahib instructed the Sikh Nation to boycott both the Rashtriya Swayamsevak Sangh and its offshoot Rashtriya Sikh Sangat due to their anti-Panthic activities and agenda. In the past, they have maligned the Sikh image, Sikh history and used agents to infiltrate various Sikh organization on their behalf.