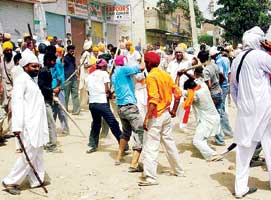 Dabwali, Haryana (KP) - The conflict between the Sikh Nation and the Sirsa based Sauda cult took another turn for the worst when clashes between cultists and Sikh protestors claimed another Sikh youth's life in the town of Dabwali in Haryana.

Furious over the latest murder, members of the Sikh community clashed with cultists for several hours before authorities managed to control the situation in the border districts of Bathinda, Mukatsar, Faridkot, and Sirsa. Tensions also flared in the districts of SriGanganagar, and Hanumangarh on the border with Rajasthan.

On Saturday, thousands of Sikhs gathered in large numbers at Shaheed Bhai Harmandir Singh's native town of Dabwali to pay tribute to the Sikh Nation's third Shaheed in the anti-Sauda Dera agitation.

Bhai Harmandir Singh, who was also known as Mandar Singh in the community, was a local leader of the Sri Guru Granth Sahib Satkar Sabha. His body was cremated according to Sikh rites after being taken from a local Haryana Gurdwara Sahib in a huge procession and show of strength by the Sikhs.

The Shaheed Singh's body, draped by siropas (robes of honor) presented by Sikh organizations, was carried on top of a large vehicle with his father Sardar Mohinder Singh, Takht Damdama Sahib Jathedar Balwant Singh Nandgarh, and other prominent Sikh leaders, and members of the Sri Guru Granth Sahib Satkar Sabha.

Emotions on Edge as 3rd Sikh Martyr is Cremated

Passions were on edge as the large numbers of mourners raised loud Jaikaras of 'Bole so Nihal, Sat Sri Akal' and 'Shaheed Harmandar Singh Amar Rahay.' Slogans against the Sirsa dera and its criminal chief were also raised through the procession. 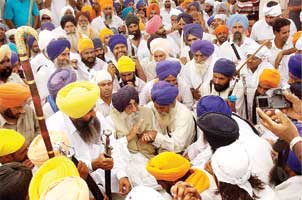 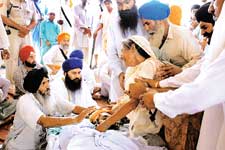 After the Shaheed's body was brought to Dabwali's cremation ground, an emotional farewell was given by the martyr's parents, elder brother, and wife Manjit Kaur. His surviving daughter, Sukhandeep Kaur, 5, and son Gurcharn Singh, who is only two and half years old, seemed oblivious to the tragedy that occurred in their family.

The Funeral fire for Bhai Harmandir Singh's body was lit by the shaheed's father and elder brother, along with Jathedar Nandgarh and Avtar Singh Makkar of the SGPC.

After the antim-saskar, Sikh leaders such as Simranjit Singh Maan, Baba Baljit Singh Daduwal, Daljit Singh Bittu, eulogized the martyr at the local Gurdwara at Dabwali.

There was a huge presence of local police, Border Security Forces, and Rapid Action Forces throughout the area, in which the entire border area between the districts of Bathinda and Mukatsar had been sealed and a curfew put in place. Only during the antim-saskar procession was the curfew lifted for about two and a half hours.

According to eyewitnesses, a local 'naam-charcha' (Sirsa cult meeting) was being organized at the residence of Sundar Dass Mehta on Friday. Volunteers of the Sri Guru Granth Sahib Satkar Sabha, including Bhai Harmandir Singh, complained to the local police officials about the meeting, but officials, who themselves sympathize with the cultists, turned a blind eye to the issue.

When the Singhs, numbering only 15-20, began to protest outside Mehta's residence, they were violently confronted by the cultists whose numbers had now surged into the hundreds-heavily armed. In the initial attack, dozens of cultists ambushed Bhai Harmandir Singh with sharp weapons and latthis (staffs), several others were injured in this melee.

When other members of the Sri Guru Granth Sahib Satkar Sabha found out about the situation, they quickly arrived at the scene and took possession of the Shaheed Singh's body, and in protest closed down the Delhi-Dabwali highway. 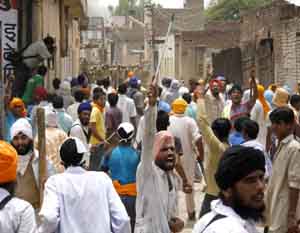 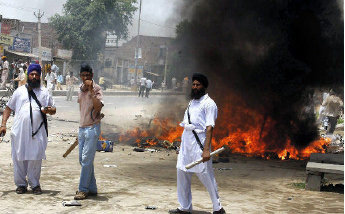 According to press reports, the deputy commissioner Oma Shankar, and senior police captain Venktarmun, soon arrived at the protest scene and attempted to disperse the protesting Singhs using the infamous 'lathi-charge' tactic in which half a dozens more Singhs were injured directly due to police brutality.

As reports of the mistreatment of the Sikhs in Haryana spread, more Sangat began to pour into the town of Dabwali, in which during the evening the Sikh protesters began to retaliate against the authorities and Sirsa cultists. It took several hours and reinforcements from neighboring districts before the Police could contain the situation.

As in the past, local government officials are suspected of sympathizing with and protecting the cult dera members, and are being partly blamed for the death of Harmandir Singh. They include deputy commissioner Oma Shankar, a sub-inspector Dalip Singh, and local patwari.