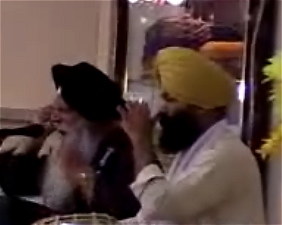 Selma, CA (KP) - Ragi Darshan Singh, who day by day seems to taking on the form and character of ex-communicated heretic Gurbakhsh Kala-Afghana, is guilty not only of violating the edicts of Sri Akal Takht Sahib, but also guilty of absconding the open challenge given to him Panthic organizations at Sri Damdama Sahib several months ago.

As mentioned last week, he visited a small town Gurdwara in California where he again, unleashed a barrage of attacks and false propaganda against the sacred Bani of Guru Gobind Singh Ji.

Different clips of Ragi Darshan Singh’s recent tour to Selma are being published in this week’s edition to make Sikh organizations throughout the world aware of that ragi’s continued propaganda against Dasam Bani. His hate filled sermons were delivered after he openly failed to accept a challenge to discuss the contents of Dasam Granth Sahib at the Damdama Sahib convention.

Throughout his sermons, the Ragi insists that everyone should decide on the authenticity of Dasam Granth banis by first deliberating upon its contents at the personal level, but at the same time, he uses such filthy words and exposes Sikh Sangat to misinformation about the Dasam Granth Sahib leading them to ultimately shun the entire scripture without even thinking of reading it.

One of the biggest mistakes, Charitropakhiyan detractors make is that they attempt to connect Guru Gobind Singh Ji to the actual characters in the various stories told in the charitars. This really illustrates the level of ignorance of these so-called Dasam Bani 'experts.' Throughout the end of each charritar, the following verse is written to emphasize that the story in each chariter is being told by conversation by a minister to a king (ਮੰਤ੍ਰੀ ਭੂਪ ਸੰਬਾਦੇ). Hence:

Its clear from the above verse, that Charitropakhiyan is a collection of the charitars that are being narrated by the minister, and Guru Gobind Singh Sahib Ji is the scribe, and not the character in these stories. Despite the facts, the Kala-afghana/missionary lobby continues to make such calculated attacks on Sri Dasam Patshah's sacred Bani.

The average Sikh may not care enough to deliberate upon the meanings of Jap Ji Sahib, and by spreading misinformation about Dasam Granth Sahib, Ragi Darshan Singh played the game of ensuring that Sikhs hide even after hearing the name of this Granth.

As can be seen in the videos, Similar to Ram Rai, the Ragi openly misquotes from banis such as Bachitar Natak and Charitropakhyan. While Dasam Bani openly and harshly criticizes many aspects of hindu mythology, the Ragi spreads a blatant lie that Dasam Granth Sahib promotes worship of 33 Crore Devis and Devtas. He equates the Dasam Bani to the personage level of Prithi Chand, claiming this Bani can not be called Guru's own in the same manner Prithyia was not considered as Guru's own.

Having spread such lies in the presence of Guru Granth Sahib, and being guilty of violating multiple Hukams of Sri Akal Takht Sahib, the Ragi must be confronted by the worldwide Sikh Sangat and shunned from the stages of Panthic Gurdwaras. On his foreign tours, he is promoting himself as a scholar of the bani of Dasam Patshah, but when openly challenged by the Guru Roop Saadh Sangat to debate at Damdama Sahib, the Ragi scuttled to save his face from embarrassment. If he is not willing to discuss this matter with actual scholars, should the Sikh Sangat allow him to speak from the stages of its Gurdwara Sahibs?