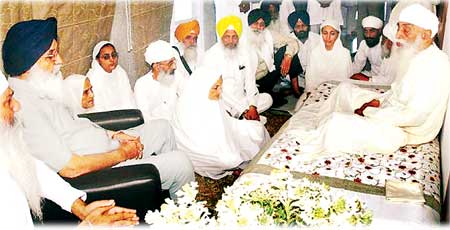 Ludhiana, Punjab (KP) – The recent news of Parkash Badal visiting the Naamdhari headquarters in Bhaini has once again brought him the condemnation of the Sikh Community. But the former Shiromani Akali Dal (B) President has shown less and less concern towards these complaints. Badal's visit to Bhaini included the company of many other Shiromani Akali Dal leaders, which certainly put a shameful label to the political party’s name.

The Kuka Darbar visit obviously came to win Jagjit Sinh’s followers' votes, but when asked by the press regarding the reason to visit Bhaini, Badal alleged he wanted to sympathize with the demise of "Maharaj" Bir Sinh, the younger brother of aged Jagjit Sinh, the current chief of the Naamdhari cult. Bir Sinh passed away on October 11th when he suffered from cardiac arrest.

Leaders of the Shiromani Akali Dal (B) that accompanied Badal on his visit included Hira S. Gabria, Inder Iqbal Atwal and others. Badal praised the life and service of Bir Sinh towards humanity. From the Naamdhari Darbar, several eminent personalities, including Bir Sinh's sons, were present while Badal visited.

In the past, Parkash Badal has showed explicit interest in helping promote the Naamdhari cult. Donations in large sums of rupees have been made to the Naamdharis to help assist their existing programs throughout the country and with Parkash Badal's help, the "Satguru Ram Singh" chair has also been reinitiated at Guru Nanak Dev University.

The timing of the visit has come while the Sikh Nation celebrates the 300th Gurta-gaddi anniversary of Guru Granth Sahib. Badal however, is trying to please the very community that opposes the idea of Guru Granth Sahib being the successor of Guru Gobind Singh Ji.

Although, the Namdharis consider themselves to be Sikhs, they are not accepted by the main Sikh population due to thier fanatical belief in a living human guru. The cult does not accept the Gurta-Gaddi of Sri Guru Granth Sahib Granth Ji, instead they worship a deh-dhari 'guru' as their spiritual master. Naamdharis consider Balak Singh (1797-1862) as their 11th 'guru', and the successor to Guru Gobind Singh Ji. They follow many ritualistic Hindu traditions like the worshiping of fire (havan), and also maintain the Hindu belief that the cow is sacred animal.