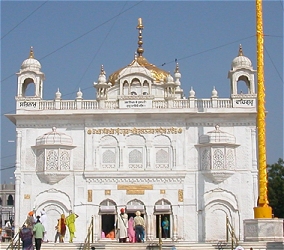 Sri Hazoor Sahib, Nanded (KP) - Sources have revealed that during the 300 years gurta gurgaddi divas celebrations at Takht Sri Hazoor Sahib, the self-described Sanatanist ‘Nang’ Niddar Singh, his associate Parmjit Singh, and other UK Nangs were challenged by the local Sangat for publishing derogatory information in their newly released book. 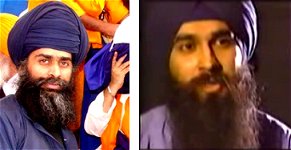 It is reported that representatives of Hazoori Singhs, Buddha Dal, Damdami Taksaal, and other Nihang Singhs from various Dals, challenged Niddar Singh, who has been propagating pro-RSS ‘Sanatanism’ in the UK and abroad.

The Hazoor Sahib Singhs were furious with Niddar Singh and reportedly roughed him up for insulting Singh Sahib Kulwant Singh, Jathedar of Takht Sri Hazoor Sahib, in a book recently published by him and Parmjit Singh called ‘In the Master's Presence: The Sikhs of Hazoor Sahib.’

In the presence of Singh Sahib Giani Kulwant Singh, Niddar Singh reportedly pleaded for forgiveness fearing his safety and publicly stated that he, Niddar Singh 'Nihang', and Parmjit Singh apologise for misleading the Sikh Sangat in their recently published book.

Members of the Sangat made a video of the apology that will be shortly released on the Internet. Readers will be notified as soon as Panthic Weekly receives further details of this incident.