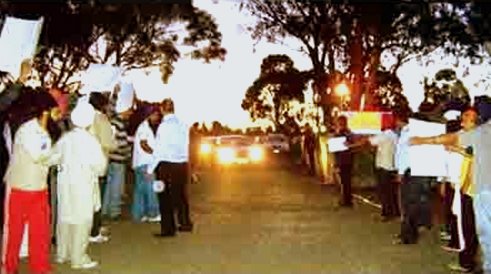 MELBORNE, Australia (KP)-- After being rejected and humiliated on multiple occasions in North America, the lecherous saadh Maan Sinh Pehowa had hoped he would fare better during his recent trip to Australia – but he could not have asked for a worst reception.

The rapist baba has faced large scale protests by the Australia Sangat, proving that he still remains unwelcome in the Sikh commmunity. The global opposition against Pehowa continues until he admits his wrong-doings in front of Akal Takhat Sahib and Sikh Sangat and is properly brought to justice by the authorities.

The Sikh Sangat had started protesting the visit by Baba Pehowa long before his diwan started in this small south eastern city of Keysborough. The Committee of Gurdwara Sahib Keysborough, which was keen at supporting Baba Mann Sinh Pehowa's Australia visit, was already made aware of the protests but were unwilling to change their stance. After his diwans, the Pehowa Saadh had tried to avoid the protestors and any possible mishap at the Gurdwara Sahib. 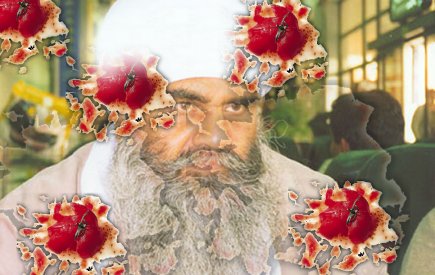 Humiliated Saadh's motorcade was pelted with tomatoes and eggs

Despite his effort to escape the protestors, he was confronted outside the gates by the angry Sangat that was raising slogans and holding banners against him. Immediately, his vehicles, and others who were following it, were pelted with eggs and tomatoes, thrown by the protesting community members. Stunned by this "welcome", the baba's motorcade sped away quickly to avoid any further humiliation from the local Sangat.

The spirited work by the Australia Sangat remains unmatched by protests held against the Baba elsewhere. Such tenacity was not expected as the Sangat in Australia is smaller when compared to other countries where similar protests have taken place. After the committee was made aware of the protests, they had already asked the Australian Police to provide security. But considering the large number of protestors, the security officials decided not to interject.

The programs by Mann Pehowa were organized in Australia after he deliberately failed to find places to host him in countries such as the United States, Canada and England, however his supporters probably did not realize he would receive such a humuliated rejection here as well.

Spokespersons of different organizations, including the Sikh Student Federation of Australia, Akhand Kirtani Jatha Australia, and local Sangat of Melbourne, appealed to the worldwide Sangat not to support Baba Mann Sinh Pehowa, they also asked the current Akal Takhat Sahib appointed Jathedar to consider the different allegations put forth on Baba Mann Sinh by the worldwide Sangat.

Remains Unwelcome at Major Gurdwaras in the Country

Panthic Weekly was notified that Mann Pehowa’s Australian visit was not sponsored by any Gurdwara Sahib. He was travelling the country on a visitors visa without any sponsorship. His supporters have been promptly turned back at multiple Gurdwara Sahibs in Blackburn, Craigeburn, Shepperton and Werribee when they attempted to hold programs.

Gurdwara Sahib in Keysborough has put itself in a pitiful situation after hosting this rapist baba. Although after the protests they agreed to not allow further programs by the saadh, the Gurdwara Sahib has certainly put its name in the limelight. Considering that it is still under construction and pending several legal requirements, any further protests by Sikh Sangat could largely impact its future success.

False Stunts Keep the Baba to Remodel Self Position

Several stunts were played by Mann Pehowa during the recent Gurta-Gaddi celebrations at Hazoor Sahib. Even though the organizing committee did not officially welcome nor support Pehowa Saadh, his comic-like act failed to bring him any fame within Panthic Circles. His scheme of organizing a langar with 300 different types of foods mostly received as a comic spectacle and criticized by Sangat.

At Hazoor Sahib, followers of Mann Pehowa worked around the clock to introduce gimmicks such as pizza, soup and noodles under the name of langar . Despite this effort, this circus of mocking the institution of langar was not successful and the rapist saadh failed to rebuild his image.

Sevadars of Panthic Weekly, along with local Sangat of Melbourne, appeal to the Sikh Sangat to continue protests against the Rapist Saadh and until he is brought to justice for his crimes, and he apologizes to the entire Sikh community for his misdeeds.