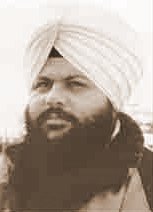 FRANKFURT, Germany (KP)--With the wide cooperation of several Human Rights and Political Organizations, German Authorities have officially dropped all charges against Bhai Harvinder Singh (Belgium) and released him from police custody unconditionally. Bhai Harvinder Singh was falsely implicated in various terrorist activities at the behest of the Indian Government by the Interpol Police after KP Gill, the mass murderer, filed complaints against him.

According to Bhai Harvinder Singh who addressed the press shortly after his release this past week, he was let go after the German Police failed to receive any proof of his alleged terrorist activities from Indian Authorities. Bhai Harvinder Singh put the blame of his suspicious arrest on KP Gill, whose turban he had removed a few years ago during his visit to Belgium.

KP Gill, known to cross all limits of human decency, is responsible for the mass-murders and genocidal elimination of thousands of Sikh Youth in Punjab. His involvement in the arrest of Harvinder Singh was a well-framed plan. On the behest of KP Gill, different murder cases were opened against Bhai Harvinder Singh in Punjab and complaints were filed with the Interpol Police to carry out investigations in Europe. The plan was to ultimately have Singh deported to Punjab where KP Gill could easily take his revenge.

According to a report on the arrest of Bhai Harvinder Singh published by Panthic Weekly, Bhai Harvinder Singh is a Citizen of Belgium. He left India many years ago to earn a living there. His name has never been mentioned in any political activities in Punjab in the past and his arrest in relation to ‘several murder cases’ left everyone perplexed.

Panthic Organizations worldwide expressed concern as several Sikh Youth have been eliminated by the Punjab Police after their forced deportation from different countries. Close to the arrest of Bhai Harvinder Singh, another Sikh named Bhai Satnaam Singh was deported by the German Police on the request of Indian Authorities to try him in the court of law. Bhai Satnaam Singh was however killed within forty-eight hours without any trial. Prof. Davinderpal Singh Bhullar, another Sikh who was forcefully deported to India, is now facing death row after going through a counterfeit court trial.

Bhai Harvinder Singh's release has been celebrated by Sikhs living throughout Europe, including Germany, Belgium, Italy, France and England. Different Sikh Organizations have appealed that the United Nations should thoroughly investigate any cases of deportation before taking final actions. In addition, the cases of all deported persons should be monitored closely by the UN and Human Rights Organizations to ensure human rights are not abused by the Punjab Police.