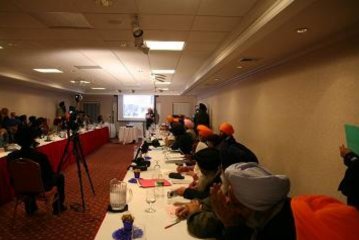 Avtar Singh and Daljeet Singh launched United Sikhs' First Global Sikh Civil Rights Report and were presented the 65-page report. Avtar Singh commented that the SGPC will always stand in support of civil rights for the Sikh community, and praised United Sikhs for its advocacy efforts. Daljeet Singh also expressed his concerns regarding civil rights issues, highlighting that the turban is an inseparable part of the Sikh identity, and pledging assistance for the French turban cases. Excerpts of the report were read out by Sikh youths from New Jersey, and were elaborated on by country representatives.

The Conference participants, comprising youths and community elders from United Kingdom, Ireland, Canada, USA, France, Belgium, Malaysia, Australia and Afghanistan were first treated to an inspirational film "Fighting for My Crown" which was followed by a video message especially made for the conference by singer-activist, Rabbi Shergill, whose sufi-rock song Pagri' was played afterwards.

The Conference deliberated on the following five issues: dastaar (Sikh turban) and kakaar (Sikh articles of faith); Sikh awareness within and outside the community; Sikh parchar (teaching) within and outside the community; Sikh identity; and civil rights awareness. Delegates submitted recommendations and declarations on these five issues which were compiled by the Rapporteurs.

In a room packed for over six hours, the deliberations occasionally resulted in heated debates surrounding certain civil rights issues, including action for the return of prized materials held by the Indian government from the Sikh Reference Library that was burned in 1984. At the end of the deliberations, declarations and recommendations on the five issues were passed by over 170 attendees.

The day of deliberations started with a fifteen minute documentary, Fighting for My Crown, highlighting the Right to Turban (RTT) cases challenging the laws in France banning ostensible religious symbols in schools and on photograph identification, and proceeded with a specially recorded keynote address from famed Sikh musician Rabbi Singh Shergill available for download here. The keynote was followed by the launch of United Sikhs First Global Civil Rights Report by Avtar Singh and Daljeet Singh, and Sikh youth presented selected excerpts from the report. Delegates from each of the selected countries provided commentary and additional information concerning civil rights in their respective countries. Delegates included Gurdial Singh of French Turban Action Committee, Dabinderjit Singh of Sikh Federation UK, Baljinder Singh of Canada (who is currently challenging the Ontario law requiring helmets on motorcycles and does not provide an exemption for turbans with the assistance of United Sikhs), Mohinder Singh of Sikh Sangat Gurdwara in St Truiden, Belgium, Harpreet Singh, Legal Director United Sikhs-USA, and Kiranjot Kaur of Shiromani Gurdwara Parbandhak Committee, India.

The civil rights issues in the report range from water rights and compensation for victims of the 1984 violence against Sikhs in India, to the French turban issue, to Sikh identity awareness in Japan, to hate crimes and employment discrimination in North America. During this time, attendees were asked to provide commentary on forms with the five topics, dastaar (Sikh turban) and kakaar (Sikh articles of faith); Sikh awareness within and outside the community; Sikh parchar (teaching) within and outside the community; Sikh identity; and civil rights awareness, so that Rapporteurs could compile the information for declarations and recommendations to be passed at the end of the deliberations.

Some Comments on the Civil Rights Concerns

Master Mohinder Singh, Elected Official, Queens Democratic Committee in New York, stated, "Sikh principles are for the betterment of all people in America we need more communication with the officials so that they understand our problems and make suitable policies to address them."

Kiranjot Kaur, SGPC, India, discussed the repossession of the valuable collection of the Sikh reference library previously thought to be burned, and stated that the SGPC was working on the issue but had gotten little response from the authorities. Dr. Ranjit Singh, a member of the New York Sikh community, commented that time is of the essence and that more urgent action needs to be taken to recover the materials, as it has been more than twenty years since the library was burned.

Gurdial Singh, French Turban Action Committee, commented that Sikhs in France will never be defeated on the issue of the turban.

Harpreet Singh, Chairman, Sikh Cultural Society, commented, "Politics is local and we have to advocate in our respective communities."

Karandeep Singh, Representative of Sikh Council of Central California, USA, and himself a victim of a brutal hate crime commented, "We need to setup counseling resources for Sikh hate crime victims, including psychologists and other professionals who understand our community."

Jaspal Singh from Mumbai, India commented that Sikhs in India should practice their right to carry larger kirpans as part of their dress so that the positive image of Sikhs with their kirpans will be reinforced in the minds of the general public.

Rajender Kaur, Gurdwara Sahib of New Orleans, USA, commented "we must all stand together for this very important fight for the right to wear the turban and have faith that we will win."

Giani Swaran Singh, Khalsa Darbar Vancouver, Canada, commented that the biggest issue for the SGPC to work on was getting the Anand Marriage Act passed in India.

Harpreet Singh, a radio commentator from Toronto, Canada, commented that there is a need a Global Sikh Forum.

Narinder Singh, representing Sikh Gurudwara of Greater Washington, USA, called for global representation for Sikhs and commented as to the lack of counsel, law firms, and think-tanks specifically working for the Sikh community, as other communities in the world are represented.

In his address, President Avtar Singh, SGPC, commented on those civil rights activities that the SGPC has been involved in the past three years, including approaching the Indian and French authorities on the French turban cases. Reading a passage of a report on the turban, he stated "S.G.P.C. has put the ball in the court of Govt of India and Govt of France. Before moving any court and loosing our power to negotiate the issue on diplomatic channel, S.G.P.C. would like to refer the matter to the Ecclesiastical Court of Sri Akal Takht Sahib, where all our individual efforts should to consolidated immediately, and the Ecclesiastical Court of Sri Akal Takht Sahib, a consolidated statement of Sikh Panth shall be delivered to Sardar Manmohan Singh, Prime Minister of India, individually as a Sikh and as a representative of Govt of India, and protector of Human Rights of his subjects in India as well as abroad, to put economic pressure on France" He also commented on the injustice Sikhs have faced in India in light of the numerous commissions surrounding the brutal killing and violence against Sikhs in India in 1984, where victims have not received adequate compensation and those politicians directly involved with the violence still continue to avoid prosecution for their crimes. Lastly, he stated that the SGPC will always stand in support of civil rights for the Sikh community, and praised United Sikhs for its advocacy efforts.

Reading from a letter that was delivered to United Sikhs, Chairman Daljeet Singh, DSGMC, commented specifically on the French turban cases, stating that "the just cause of French Sikhs is not just the issue of wearing or rejecting religious signs but also about preserving the cultural diversity in the world" and that the "wearing of turban by a Sikh is an expression of his [or her] identity and in no way it threatens the secularity of French society." He also mentioned a peace march that was jointly organized by the DSGMC and United Sikhs, and a memorandum that was submitted to French President Nicholas Sarkozy. You may read about the peace march at: http://www.unitedsikhs.org/PressReleases/PRSRLS-20-01-2008-00.html. Lastly, he stated that the "DSGMC will extend all possible support in cash or faculty resources" for the opening of a private school for Sikhs in France.

After the addresses by the Chief Guests and a short tea break, delegates came forward to comment on the five topics, and raised a number of concerns including the need for a Global Sikh Civil Rights Forum. Following the delegates, Mejindarpal Kaur, Director United Sikhs, presented the declarations and recommendations, which were passed by the attendees. Click here to view the recommendations and declarations that were adopted.

United Sikhs would like to thank Gurdwara Baba Makhan Shah, Richmond Hill, NY, and the Sikh Center of New York, Flushing, NY for providing tea, snacks, and langgar (food from the community kitchen) for all attendees. For a list of participating organizations and Gurdwaras, please click here.

You may read a previous press release on a United Sikhs' civil rights advocacy at:
http://www.unitedsikhs.org/PressReleases/PRSRLS-27-11-2008-00.htm