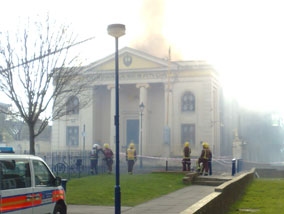 London (KP)--Two weeks ago, the worldwide Sikh sangat was heartbroken to hear news about the maltreatment of their holy master by a hateful culprit whom police have not made a serious attempt to bring to justice.

The police along with the media have failed to understand the seriousness of the crime the criminal has committed. Prabhandaks of Gurdwara Sahibs across the country along with the Sangat need to make an attempt to encourage media and police not to let this problem go unresolved. In addition Sangat should offer a large reward for anyone who helps in the arrest of the culprit.

On March 16th, 2009 a group of women came to the Sikh Gurdwara located at Harley Road in Bow to gather together to sing and pray from the holy hymns contained in Sri Guru Granth Sahib Ji. The group of women have made it a habit to come together to sing praises of the Guru as it brings them a great sense of peace and joy. This sense of peace and joy was disrupted at approximately 1:30 p.m.

While the group of women was gathered together singing in joy, a suspicious person who was described as a Black or mixed male was spotted entering the Gurdwara through a side entrance. One of the concerned ladies from the Darbar Sahib approached the suspicious man who was walking down from the top floor in a nervous and hastily manner. On meeting this nervous intruder, the woman inquired what the man was doing. He replied that he came to visit someone. Before she could further inquire on his visit he quickly ran out of the Gurdwara.

Shortly after the criminal's escape, the vigilant Sangat noticed flames coming from Sach Khand--the room in which Sri Guru Granth Sahib Ji is contained. The concerned women quickly maneuvered to enter Sach Khand and rescue the saroops of Sri Guru Granth Sahib Ji. Unfortunately, they were prevented to enter due to the deadly flames. They then bravely tried to put out the flames with buckets of water, but the fire could not be defeated by a few water buckets. Only being able to rescue one of the burning saroops, the congregation called the fire department. Upon arriving, 50 Fire fighters were able to extinguish the fire after an eight hour struggle with the deadly flames.

During this catastrophe, the Gurdwara's roof collapsed, 75 percent of the building was damaged, and 11 saroops of Sri Guru Granth Sahib Ji were burned. While fire fighters were able to put out the external flames which destroyed one of UK's oldest Gudwaras, Police officials have failed to put out the fire which burns within the Sikhs' hearts which has escalated after realizing the neglect on behalf of Government authorities. When news of the incident hit Delhi, an uprising amongst angered Sikhs arose as it reminded them of the incidences in which Hindu terrorists caused damage to numerous saroops during the Delhi genocide.

So far Police have not given this grave incident any importance. Police have interpreted the crime as being a criminal act to “property." They are treating this incident as suspicious. However, it is obvious that the plan was a deliberate attempt by a hateful criminal. Members of the Gurdwara have reported that in the past few weeks they had noticed racist graffiti on the Gurdwara’s outside walls.

In addition to the Police neglect, the mainstream media has given poor coverage of this pre-calculated hate crime. It might not be a good idea to glorify this incident in the media, since terrorists enjoy attention which provokes them to commit more deadly acts. The police should collaborate with eyewitnesses of the culprit and have a professional draw a sketch. This sketch should then be projected on public television. It would be helpful if Gudwaras started to install time lapse security CCTV cameras which would make it easier for police forces to view footage of any crimes. This footage could be sent to media outlets.

For concerned Sangat, below is a model letter which the Sangat can use or emulate to email their local MPs and help inform officials on the seriousness of this issue. In an addition to illustrating details and the magnitude of this malicious crime, Sangat should invite local MPs, police officials, and media outlets to visit your local Gurdwara Sahib. Hopefully after visiting a Gurdwara, officials will understand how important the Guru is to the Sikhs, and take the issue more seriously. It is a responsibility of every Sikh in the UK to inform their local MPs, police officials, and local media outlets to make sure this issue does not go unnoticed.

I am writing to you in concern with Sikh Gurdwara that was set alight and burnt to the ground on 16th March 2009 in Bow, East London. This attack has left the Sikh community across the country in deep shock and I want the authorities to carry out a thorough investigation to catch the culprits.

According to eyewitnesses inside the Gurdwara during the attack, they saw a black/mixed-raced unidentified person running through the Gurdwara building just before the congregation realized that the building has been set alight. The fire was a direct attack on the Sikh community which has been ignored by the main stream media and handled poorly by the police. The attacker(s) burnt eleven copies of the Sikhs’ Sacred Scripture, Guru Granth Sahib, which the Sikhs revere as the Living Guru, the Living Voice of eternal wisdom that guides the community and teaches a humanitarian embracing message. The burning of one copy of Guru Granth Sahib is considered the most sacrilegious of all acts; however the burning of eleven copies of Guru Granth Sahib has scared the UK Sikh community.

No arrests have been made by the Police and this has brought about feelings of frustration, anxiety and anger amongst the Sikh Community which is bent upon ensuring that the perpetrators are brought to justice. Failure of finding the culprits motivates the individual or gang and others to do a similar attack on other Gurdwaras.

There is a strong feeling amongst the Sikh Community that the Police do not understand the gravity of the crime or that the Police do not care. The community feels that this crime is low on the list of Police priorities. This is illustrated by the fact that they interpreted the crime as being a criminal act to "property", thereby treating the incident only as one of arson.

I urge you to bring forward this matter to the police and government, as the growing feeling of resentment towards the Police needs to be taken seriously.

I await a response from you.

So far MP George Galloway has responded in a letter to a concerned Baljinder Kaur. This letter was posted on Panthic Network's DiscoverSikhi.com forums. The letter states:

Many thanks for your email and may I say first of all how shocked I was to hear of the fire at the Bow Gurdwara and its resulting destruction, and also of the injuries sustained in the fire.

As soon as I heard about the fire, I contacted the Metropolitan Police Borough Commander, Chief Superintendent Rickett, to ask for a full briefing and to be kept updated about the investigation into the circumstances of the fire and any progress in finding the culprits. There is to be a Gold Group meeting at Bethnal Green police station on Tuesday at 4.30pm which will receive an update on the progress of the police investigation. Jagmohan Singh from the Gurdwara has been invited to that meeting, although via other members of the Gurdwara whom the police have emails for as they do not (or did not) have an email for him a couple of days ago when the invitation went out.

I am afraid I am in the United States at the moment on a speaking tour to raise the issue of Palestine and aid for Gaza. I will be back in a week's time. In the meantime, a member of my staff, Rob Hoveman, will be attending the Gold Group meeting on Tuesday on my behalf and will be keeping me fully informed of any developments. I will also ensure that the views of the Sikh Community that you have vouchsafed to me below will be passed on in the same terms to the Borough Commander.

I am sorry I will not be able to attend the gathering tomorrow at Harley Road. But I would very much wish you to pass on my heartfelt condolences to the Sikh Community for this devastating fire and my sorrow for the injuries that the 11 Saroops of Sri Guru Granth Sahib Ji suffered.

We will learn more, no doubt, tomorrow and on Tuesday about the progress of the police investigation. It is important that we establish the full facts behind the fire and assist the police in bringing the culprits to justice.

The hurt is obviously greatest to the Sikh Community, who are such an important and revered part of the wider community here in East London and beyond. Nonetheless, members of all other faiths and indeed those without religion, who make up our rich and diverse community, share with you your suffering and also want to ensure that justice is done and seen to be done.

I would be very grateful if you would let others from the Gurdwara know my thoughts are with you at this very difficult time. I will be returning to London in a week, at which time I hope to meet personally with yourself and other members of the Sikh Community.

With my best wishes,


Sangat should make sure that they hold MP Galloway responsible and committed to his word and follow up on his return from the US. Despite the wider media's neglect--including Sikh newspapers--Panthic Weekly wishes to update any progress on this issue. If you happen to find any important updates, please submit your information to the address below.