The Sacha Sauda cult, who are strong supporters of Badal, have stated that they are willing to appear before the Abode of Truth, Sri Akal Takht Sahib, and ask for a pardon for trying to make a mockery of Sri Guru Gobind Singh Ji at Salabarpura, Bathinda district in May of 2007. However, they said this apology is not unconditional. This means relations and talks must take place amongst Sikh institutions and Sacha Sauda. If Sikh leaders agree to Sacha Sauda's bargain, an apology will be given.

In 2007, Sri Akal Takht had rejected a similar offer by the dera on the reason that no one can set pre-conditions for appearing before the Sri Akal Takht the highest order of Sikh institutions. But the cult's spokesman, Dr. Aditya Insaan, said, "Any apology without negotiations is not practical. We want all concerned parties to sit together to resolve the issue amicably. It cannot be that some accept the outcome of our talks and some do not." 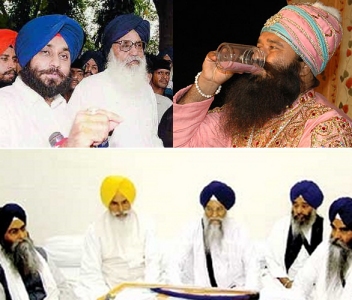 But such apologies are useless if they are not coming from the crook who posed as Guru Sahib. Ram Rahim has refused to come to the Akal Takht and ask for forgiveness--instead, he said he will send his representatives to apologize on behalf of his mistakes.

What type of bargain is that? How can Akal Takht negotiate with a so-called "Guru" who sends his minions and can't even stand up for himself?

Recently the cult leader stated, "We have been the first movers, never the second. Our responsible persons are always ready. Please mediate and get the talks started."

Yet the pseudo Guru keeps telling the media and people to continue talks and negotiations on his behalf.

Sacha Sauda wants all Sikh bodies to participate in talks, yet they can't promise that the person at fault, their pseudo-Guru, will be present at the meeting in which an apology will be given in the holy presence of Sri Akal Takht.

So far only a few Sikh bodies like the Sant Samaj have acknowledged the "draft apology" and attended meetings with Sacha Sauda representatives to discuss negotiations. While others like the Delhi Sikh Gurdwara Management Committee head Paramjit Singh Sarna have refused to accept an ingenuous and false bargain.

In the past, Harnam Singh Dhumma, the President and spokesperson of the Sant Samaj, blamed the Punjab and Haryana State Governments for being the main factor behind the violence that erupted in Punjab over Sacha Sauda. On the other hand, Paramjit S. Sarna named Badal and Bhatriya Janta Party leadership as the main culprits behind the Sacha Sauda controversy. He criticized Parkash Badal while demanding an expedited inquiry and decision on the case. Sarna said if Badal's government fails to act in a reasonable manner, he should resign from the post of Punjab Chief Minister.

Accepting the cult's backhanded apology is politically beneficial for some unprincipled politicians. There are thousands of Dera voters in the Malwa belt, particularly in the Bathinda constituency where Harsimrat Badal, daughter-in-law of the chief minister, is currently running against Raninder Singh, son of former chief minister Capt Amarinder Singh. The Badal family is looking for support in Bathinda where many cultists reside. In the last assembly polls, Dera followers voted for Congress--as a result Badal suffered heavily in the Malwa region.

The Badal's are also trying to win support from areas like Sangrur, Faridkot, and Patiala, where there is a sizeable Dera constituency. Therefore, Chief Minister Badal has been one of the main advocates to promote talks with Sacha Sauda even though their pseudo Guru refuses to face leaders of The Khalsa Panth the panj pyaare. Easing tension amongst the Sikhs and Sacha Sauda will allow the Badal family to campaign to the cult while breaking previous Akal Takht edicts and ignoring Sikh tenets and traditions.

Not long ago, Panj Pyaarey from Sri Akal Takht gave a strict hukam to avoid all talks and negotiations with Sacha Sauda (http://www.panthic.org/news/125/ARTICLE/4804/2009-03-06.html). Shortly after, Badal influenced the Akal Takht's appointed Jathedar to announce to the Sangat that they should not partake in any 'unofficial' protest marches against Sacha Sauda without the consent of the apex Takht (http://www.panthic.org/news/125/ARTICLE/4860/2009-03-27.html). It is clear that Badal is using the holy court of Akal Takht and other institutions as tools to meet his own political aspirations. It is apparent that SPGC Chief Makkar is also being manipulated by Badal. Avtar Makkar said that he sees the Sacha Sauda false bargain as a positive development to settle differences between the Sikhs and so-called Dera 'Premis.'

Makkar and Badal should have no role in determining relations with the anti-panthic cult. Nor should they have any power to dispense justice, pardons or forgiveness to the cult leader who has committed grave crimes and mistakes. Furthermore, Sikh Institutions in and out of Punjab should not be managed by nepotistic and power hungry politicians. Instead, such institutions should be managed by five elected-principled Gursikhs. Guru Sahib has already established a Gurmat based legal system which he constantly put into practice during disputes and negotiations. Only five baptized rehat waley Gursikhs who exercise strict discretion within the confines of Gurmat can handle issues with the cult.

Shiromani Gurdwara Parbandak Committee (SGPC) have stated that the Akal Takht appointed Jathedar, Giani Gurbachan Singh, is currently abroad and will return to Punjab by this week. Upon his return a meeting of the panj pyaare is expected to be held at the Akal Takht to further discuss the issue of the Sacha Sauda cult.

Sender IP identification :3.238.36.32
By clicking on the 'Submit' button, you agree to the following conditions: