IMLI SAHIB, Indore, India (KP)--Controversy erupted at the historic Gurdwara Imli Sahib, Indore when a self-styled musician-guru's visit was protested by various Sikh groups due to his anti-Panthic activities and anti-Gurmat remarks.

According to local sevadars of Indore, the Baba is worshipped as a guru-like personality by his followers and has made very offensive comments regarding Gurbani Raags and the Sikh Rehat Maryada. 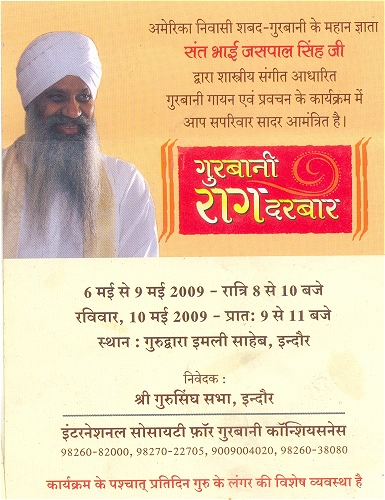 A brochure highlighting the controversial baba’s visit to Indore, where the baba stayed with some RSS activists

The Indore program, organized at the historic Gurdwara Imli Sahib, was booked by the local Singh Sabha and an organization linked to the Baba, the International Society for Gurbani Consciousness.

The baba has been staying at the residence of a rich Panjabi named Gurmeet Narang. Interestingly, Gurmeet's brother, Ajit Narang, is well known in RSS (Rashtriya Swayamsevak Sangh) circles. Ajit Narang has been coordinating various RSS yatras in the Madhya Pardes area, and both Narang brothers keep statues of the Hindu diety Ganesh in their homes.

Such is the reveration of his followers that his host Gurmeet Narang, in an interview with the national newspaper Dainik Bhaskar, on page 6 of the May 9th 2009 edition, refers to him as "Guru Jaspal Singh Ji."

The baba's connections to the pro-RSS Narang family has raised the suspicions of sevadars from Shahbaaz Khalsa, GURSIKH, Baleyo Charag Mission, and the Akhand Kirtani Jatha.

These statements outraged the local sevadars. They immediately contacted Giani Gurbachan Singh, appointed Jathedar of Sri Akal Takht Sahib, and updated him on the Baba's mischievous statements on Gurbani Raags and also the fact that he was attempting to utilize the kirtan stage of this historical sacred Gurdwara for his musical performances which were being conducted by non-Sikhs.

According to the sevadars, the Jathedar immediately sent a message to the Gurdwara Sahib Committee members and Singh Sabha president Gurdeep Singh Bhatia directing them not to allow the controversial Baba on stage.

The Baba became incensed that his programs were being blocked by pressure from local Sikh organizations. According to several eyewitnesses, he touted that he did not care about Sri Akal Takht Sahib or the Sikh Rahit Maryada. At the same time, he did not want to deal with the protesting Singhs directly and made several attempts to first appease them, and later tried to threaten and intimidate them.

Upon realizing the situation, he reportedly backed down and instead held a private performance at the Narang residence. 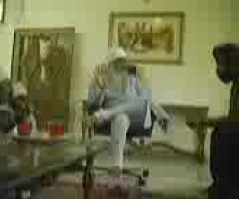 Baba Jaspal Sitting on a chair with a special pedestal to rest his feet.
His followers routinely bow their heads under his special foot-rest.

The sevadars warned the Sangat to stay alert of the mis-parchar being spewed by this Baba and be aware of his political connections to RSS related individuals and blamed the baba for attempting to create a personality cult around him.

According to the Baba's publicist, the Baba hails from Los Angeles, California and was an "experienced master of the art of exposition." He is quoted to be a disciple of "Baba Isher Singh Ji Rara Sahib" who is referred to as his Master, and also became a disciple of Ustad Mehndi Hassan, and Srimati Lakshmi Devi. He claims to be one of the only experts in classical music and flouts that he performs across the globe at all major Gurdwaras because there is nobody else with his vast knowledge and skills.

Khalsa Press has attempted to contact Jaspal Singh for the charges laid against him by the Sangat, but he has been unavailable for comments.