NEW DELHI (KP)--This past week, Paramjeet Sarna revealed his true colors to the entire world when he publicly received and hosted several notorious Congress and Arya Samajist leaders. This recent stunt by Sarna has undermined all Panthic traditions and values and strict action along with public boycott must be sought immediately to ensure such anti-Panthic acts are not repeated again.

About the same time that Badal’s paid stooges received LK Advani at Sri Harmandir Sahib, Paramjeet Sarna let loose when he not only allowed, but also honored, several pro-Congress leaders to hold a program at the Lakhi Shah Vanjara Hall at the historical Gurdwara Rakab Ganj Sahib. The program was held to commemorate the 25th anniversary of so-called shaheed Ramesh Chandra, editor of Hind Samachar. The Arya Samajist Chandra was was brought to justice by the Sikh General Labh Singh for his anti-Panthic writings and activities. Chandra was son of anti-Panthic Arya Samaj leader Lala Jagat Narayan.

Lala Jagat Narayan was the founder of the controversial Punjab Kesri newspaper that played a vitriolic role during the turbulent times from 1978-1992. This past week, Paramjeet Sarna, DSGPC President, revealed his true colors to the entire world when he publicly received and hosted several notorious Congress and Arya Samajist leaders to honor the late Narayan.

The Punjab Kesri newspaper is well known for publishing venomous editorials and content that openly attacked the Sikh faith and its principles, while promoting anti-Sikh cults and heretics such as the Naamdharis and the pseudo-Nirankaris.

In fact, Jagat Narayan was a key witness who testified in favor of the criminal pseudo-Nirankari leader Gurbachan Sinh at a Karnal, Haryana courthouse after the massacre of thirteen Sikhs on April 13th, 1978. The newspaper has published serialized columns by the controversial Jagjit S. Advocate that promoted Japji Sahib as a byproduct of the Hindu scripture Geeta. 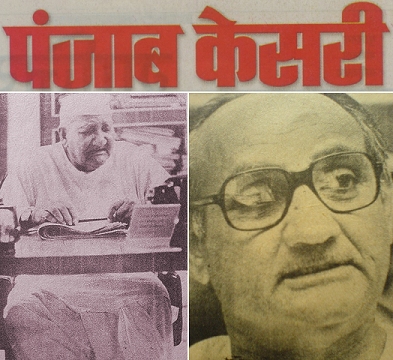 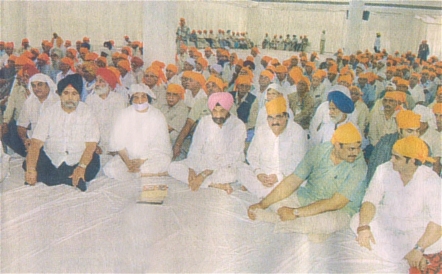 Sarna gave a speech in praise of the attendees and also presented a siropa and a sword to honor Ashwani Kumar and Kiran Chopra. During his speech, Sarna asserted that the entire Sikh Community should follow the teachings of Ramesh Chandra. Chandra, who was an editor of Hind Samachar, was labeled as a martyr and his life was glorified in the presence of Guru Granth Sahib’s parkash and local Delhi sangat which was also in attendance.

PW in April of 2008 (Anti-Sikh Groups & SGPC/DSGMC Partake in Maryada Violations), reported editor Ashwani Kumar's links with anti-Sikh personalities such as Chaman Lal, MDH owner Dharampal who has close connections with the Sirsa Dera cult and a key promoter and advertiser in the dera mouthpiece publication 'Sachi Sikhsha.' (see details at : Exposé : Hindu Infiltration of Sikh Institutions at the Highest Levels)

Sarna, while throwing light on the life of Ramesh Chandra, said that Ashwani Kumar, son of Ramesh Chandra, was continuing the task his dad started to bring unity to humanity. He held that the works of Ashwani Kumar were magnificent and alleged that it was the preferred newspaper of the Sikh Community. Several other speakers including Trilochan Sinh, Madan Lal Khurana and Ashwani Kumar also shared the stage with Sarna.

By organizing a program in memory of Ramesh Chandra, Paramjeet Sarna proved that despite being political rivals with Parkash Badal, both of them have a lot in common. What Badal is to Punjab, Sarna is exactly the same to Delhi. Sikh Sangat should stay wary of such anti-Panthic elements and boycott them at all possible stages.