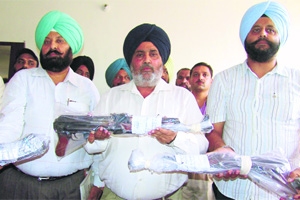 CHANDIGARH - The Punjab Police seems be at it again, doing what it does best - lying, fabricating allegations, planting evidence, and falsely implicating innocent men and women in order to gain cheap publicity.

Last week the Punjab Police and their Delhi counterparts sent out an international alert that Sikh "militants" and "terrorists" had successfully setup a terror base in Kuala Lumpur, Malaysia.

Within hours, the Malaysian authorities denounced the allegations that their country was being used as a "terror" base by anyone, let alone Sikhs.

"There is no evidence to support a recent claim by the Punjab police that the Sikh separatist group Khalistan Liberation Force (KLF) has set up base outside Kuala Lumpur, said a senior-ranking police officer."

“We can confirm there is no such group based here,” said Federal Special Task Force (Operations and Counter Terror­ism) department director Comm­issioner Datuk Mohamed Fuzi Harun in a press statement" - The StarOnline (Malaysia)

No proof of Sikh group base here, say police

Sikh separatist group has made base here

No proof of Sikh militant group base in Malaysia

For the past few weeks similar announcements have been made by the Indian authorities in which Sikhs have labeled as anti-nationals who could "disrupt" or "attack" the upcoming Commonwealth Games that India is hosting. There types of reports are bringing back bitter memories of the 1982 Asian Games when hundreds of Sikhs were arrested and publicly beaten and humiliated uder the guise that they were a threat to those hosted games.

In a similar high drama fashion, the Punjab Police announced arrest of several more members of Babbar Khalsa activists less than two weeks ago to stir up anti-Sikh sentiments under the guise of “anti-nationalist” activities.

This week, another publicity stunt was launched by the Punjab Police claiming that several more Sikhs were arrested and their plans to "disrupt" the upcoming Commonwealth Games in Delhi.

One of the individuals arrested was Pal (Pala) Singh, a citizen of France. While the State Special Operation Cell (SSOC), an intelligence wing of the Punjab Police, claimed that they had arrested Pala Singh on Wednesday, July 28th, incidentally, there already a Facebook page up on Monday, July 26th, detailing his arrest on July 22nd and once on July 18th.

He was picked up by police on 22 July 2010, they came again at around 1:00PM and took Pal Singh, his car, laptop and other belongings. The next day on 23 July 2010, they raided his house with his brother, young children and a handicapped young man living with Pal Singh.Privacy Type:Open: All content is public..Contact Info ..
Recent News

He was first picked up from his fields at around 7pm on 18-July-2010. He was returned next day only to be picked up again.On 22 July 2010, they came again at around 1:00PM and took Pal Singh, his car, laptop and other belongings. The next day on 23 July 2010, they raided his house with his brother, young children and a handicapped young man living with Pal Singh.

Pal Singh is an elderly spiritual man who’s given up comforts of living in west to go back to promote spiritual life style without drugs, drink and other intoxicants to which Punjab youth are increasingly addicted to.

PLEASE write to your local representative to urge Government of India to Free Pal Singh.

The fact that this Facebook page was launched prior to the announced "arrest" by the Punjab Police is clear evidence that the Punjab Police has fabricated the time-lines and details of the arrests. Clearly, his family and the Sikh community was aware of his arrest - the Facebook update stamps can not be manipulated or fabricated.

Another high profile individual named by the Police was was Narain Singh Chaura, a writer and author of various books related to the Sikh cause.