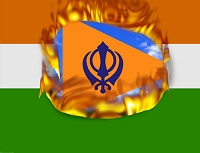 LONDON, UK - Representing a common front against Indian imperialism we join hands, on this 63rd anniversary of Indian independence, to re-affirm our unshakeable commitment to secure freedom for our respective nations and to call on the international community to dismantle the illegal occupation of our homelands by a terrorist state. Its militaristic modus operandi has now also become a danger to wider regional peace and security; the world community must counter the growing threat it poses and bring justice to tens of millions of oppressed people in the most dangerous part of the world.

Since 1947 India has forcibly denied our sovereign rights under international law; the rights to determine our own political status, to control our natural resources and to protect our populations and territories from human rights abuses amounting to genocide. It has blatantly told the United Nations that it does not even recognise the right of self-determination for those nations under its occupation, despite the clear provisions of international law and state practice - which have overseen the independence of many nations in recent years. It has brazenly ignored the UN Security Council’s own express resolution requiring a plebiscite in the disputed territory of Jammu & Kashmir. None of the catastrophic conflicts in Kashmir, Khalistan, Nagalim, Assam, Manipur and Bodoland are anywhere near resolution; responsible world opinion must ask why so many near-identical and intractable conflicts have arisen from a common source and how to now peaceably resolve them.

In its efforts to frustrate our national rights India has deployed the full might of its armed forces against civilian populations, casually killing hundreds of thousands in the process. The world’s pre-eminent human rights organisations have documented the systematic abuses in which pogroms, extra-judicial killings, disappearances, rape, torture, illegal detention and extortion have become routine, all supported by a clear policy of immunity for the perpetrators and ‘emergency laws’ which breach basic international humanitarian standards. Again, those who propagate the rule of law must ask why such massive state terror has been allowed to go unpunished for so long and how best to now hold those responsible to account.

In August 2009, the United States Commission for International Religious Freedoms put India on its ‘watchlist’ of states that fail to protect minority religious groups. Recent years have seen mass violence directed towards Christians, Muslims and Sikhs and their places of worship, with the connivance of security forces, disinterest of the courts and blatant instigation from Indian politicians who continue to hold high office.

It is both appropriate and necessary at this time to bring India in to line with international law and standards. Only the break up of this monolithic state, which has never served the interests of the peoples under its control, will offer the region genuine freedom, real security and equitable economic progress. The peaceful exercise of self-determination by our nations in our homelands should be overseen by the United Nations, which will need to promote that outcome by imposing stringent sanctions on an intransigent and increasingly menacing power.
The establishment of a special international criminal court to punish Indian genocide perpetrators and the ejection of India from the UN’s human rights bodies are urgently necessary measures if justice is to be delivered to the millions who have suffered the human misery of these completely avoidable conflicts.

Pending India’s compliance with fundamental norms of civilised behaviour we urge the international community to reject out of hand any notion of agreeing to India’s demand for a permanent seat at the UN Security Council. It would surely be perverse to reward an aggressor and a serial violator of international law with a veto power that it would use to frustrate the one institution that can and should hold it to account. India’s refusal to sign the Nuclear Non-proliferation Treaty, together with its massive spend on nuclear armaments whilst millions of its citizens live in poverty, demonstrates its belligerence which in itself should rule it out of contention for a permanent seat.
Unless India immediately stops its ongoing brutalities and agrees to international intervention to punish those guilty of rights abuses, we would urge Governments, athletes and spectators alike to boycott the 2010 Commonwealth Games scheduled to take place in October in the Indian capital. India needs to be shamed not feted in the light of the atrocities it continues to commit on a daily basis.

At a time when South Asia is the likely flashpoint of any future major war, it behoves policy makers to remedy the errors of British de-colonisation in 1947 which are directly contributing to the current instability. India is not and has never been a nation; as an artificial construct it has simply become a failed state which merits no ‘independence’ celebrations. Britain has a special responsibility for correcting those historic mistakes and, as our members protest at the injustices of the last 63 years in London today, we call on our friends in Britain to take a lead in that process.