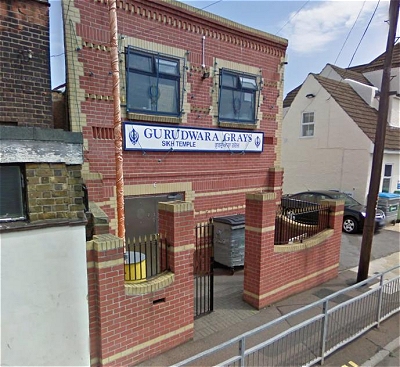 Essex, UK (KP) – In June 2010 it came to the attention of the UK Sikh community that the local community at Grays Gurdwara had voted for serving of meat and alcohol at parties that would be held at a Gurdwara owned hall that is situated next to the Gurdwara Sahib building. Further to the peaceful demonstration at Grays Gurdwara on Saturday 16th October, the Committee, Trustees and local Sangat of Grays held a general meeting on Sunday 21st November, in which it was agreed that that they will abide by Akal Takhat Sahib's Sandesh that no meat, alcohol, tobacco, dancing, or parties will be permitted in any of the Gurdwara owned property in the future. The UK Sikh Sangat is thankful to the local Sevadaars in Grays who championed this cause in the Grays Sangat.

This successful outcome, together with the closure of the party hall at Edinburgh Gurdwara just last week, has been achieved with Guru Sahib Ji’s blessings encapsulated by the collective unity and resolve of the UK Sangat, which includes young and old, men and women, and Panthic jathebandis, to enforce Sikh Maryada in all Gurdwaras.

The UK Satkaar Committee stated, “The campaign to eradicate all UK Gurdwaras of party halls which permit meat, alcohol, tobacco, dancing and parties on their premises is extremely active. The UK Sangat is determined to tackle this issue in a peaceful, methodical and co-ordinated way, so that all Gurdwaras fulfil their obligation to abide by the Akal Takhat Sahib issued maryada (protocol).”

The UK Sangat is requested to continue with their pro-active efforts of engaging peacefully, courteously and firmly with the relevant Gurdwara committees that do not implant Sikh Maryada. The Satkaar Committee has requested the UK Sangat to keep them informed of local development and that if required, Satkaar Sevadaars will assist local Sangats to resolve these issues for the betterment of the Panth and respect of Sri Guru Granth Sahib Ji. The Satkaar Committee’s contact email is: Satkaar@hotmail.co.uk

In addition to the Grays and Edinburgh situations, the Sangat will shortly be provided details of a third Gurdwara in Birmingham which is refusing to comply with Akal Takhat Sahib's Sandesh. Akal Takhat Sahib has also been provided with the full details of the 15 or so Gurdwaras in the UK which continue to have party halls. The Satkaar Sevadaars are awaiting an instruction from Akal Takhat Sahib regarding these 15 Gurdwara Committees. All such Gurdwaras are requested to renounce their anti-Sikh activities as soon as possible and make their institutions ones that enable our Sikhi to flourish.