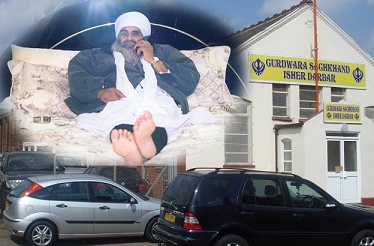 Midlands, UK (KP) - Pseudo-Baba Mann Sinh Pehova, blamed for numerous sexual assaults and scandals involving his followers has setup a new base at a Gurdwara in the UK. Recently, Gurdwara Sachkhand Isher Darbar on Vicarage Road in West Bromwich (Birmingham) was set up by supporters of this notorious.

The Pehova Baba is due to hold programmes in the UK at the Gurdwara setup by his followers from Friday 26th November 2010 to Sunday 5th December. Sikh TV, a UK Sikh television channel, has been promoting and advertising this controversial Baba’s UK tour, whereas the other two channels, Sikh Channel and Sangat TV have declined to support the scandalous preacher. A representative from Sangat TV stated that the channel was contacted by the Baba's followers and asked to advertise his programmes but Sangat TV refused the request due to the controvercy surrounding the Baba. The moral stance taken by Sikh Channel and Sangat TV is commendable.

POLITICAL LINKS WITH POLICE AND BADAL

Due to close proximity with the ruling Akali Dal Badal regime, the local politicians, and the Punjab Police, no action has been taken against the Baba despite numerous complaints filed by his victims and human right organizations. Instead, the Baba has found convenient way to silence his detractors.

In 2007, a physician who was about the unravel information on the secret abortions performed on several female acquaintances who lived at Baba's Dera was blinded in both eyes after an acid attack by his followers.

Recently Sahib Singh, the Baba’s former assistant was falsely framed on terrorism charges and arrested by the Punjab Police on October 26th , 2010. In news reports Sahib Singh was identified as ‘Jasmail Singh’ and a hard-core member of Babbar Khalsa International who was plotting to kill the Pehowa Baba, and linked him to the murder of pseudo-Nihang Ajit Poohla (see Times of India news report). Although Sahib Singh was arrested on the 26th morning, the police reported it as October 31st. The Baba has used such tactics in the past to blackmail, intimidate or falsify charges in cooperation with the corrupt Punjab Police.

Sahib Singh has been instrumental in exposing the lecherous activities of the Pehova Sadh, and had worked with the Majha Ex-Servicemen Human Rights Front chairmain (Retd) Col. GS Sandhu in bringing forth female victims that Baba had raped and sexually assaulted for the years.

The UK Sikh Community is urged to boycott this notorious Pehova wala’s programmes and take a strong stand against such charlatans who have molested and assaulted countless innocent devotees under the garb of Sikhi.