Sikh Dastar Continues to be Desecrated under Akali Rule

MOHALI, PUNJAB (KP) - Not too long ago, Sikhs in India were protesting in front of various embassies in regards to the security procedures in western airports in which Sikhs were being forced to remove their dastars (turbans). Last week, the Indian government even filed a protest with the Government of Italy when a Sikh golfing coach was asked to remove his turban during a routine security screening at an Italian airport.

While the Indian media continues to highlight just a handful of isolated incidents abroad, they are being suspiciously silent when the same Sikh dastar is desecrated and disrespected daily across India - especially in Punjab which is ruled by the Sikh dominiated Akali Government.

According to the Sikhs for Justice organization, the incident in the above video took place on March 28, 2011 when pharmacists from Punjab exercising their fundamental right gathered in Mohali for a peaceful sit-in to high light their demands.

Punjab police on the orders of Badal Government first cane charged the gathering in which women were beaten mercilessly by Punjab Police. Not satisfied after beating the women, senior officers of Punjab Police then ordered the police to forcibly remove turbans of Sikhs who were present in the gathering. 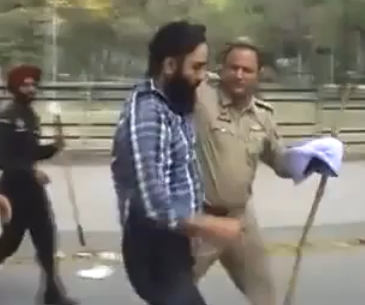 The dastar of the young Sikh in the video is ripped from his head in the most insulting manner, and furthermore, the man is verbally abused before being placed under Police custody.

The policeman who removed the turban was identified as “Kul Bhushan” and is presently posted at police station Phase-1 Mohali as SHO.

The Sikh being detained in the video does not swear or retaliate or resist arrest, yet he is treated lesser like an animal by these Punjab Police officers. This is a daily occurrence for Sikhs, yet no action has ever been taken by Badal’s ‘Panthic Sarkar’ or the Takht Jathedars. The Punjab Police is directly under the command of the Chief Minister of Punjab Parkash Badal.

Several years ago, a group of GurSikhs protesting the beadbi (disrespect) of Sri Guru Granth Sahib Ji’s saroops were insulted and roughed up by goons of Avtar Makkar, the president of the Shiromani Gurdwara Parbandhak Committee (SGPC). No action was ever taken against the perpetrators by either the authorities, SGPC or the Takht Jathedars. (See article published in 2006 on Panthic.org.)

As Sikhs, how can we expect respect from others, when our dastar is being dishonored and desecrated in this manner at home by our very own? 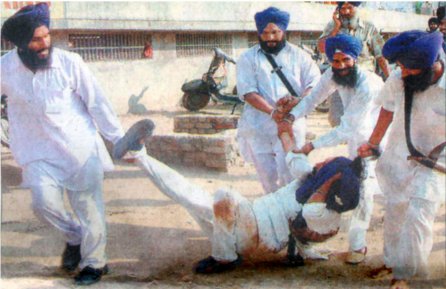 August 2006 photos of a GurSikh being attacked by SGPC 'task force'. 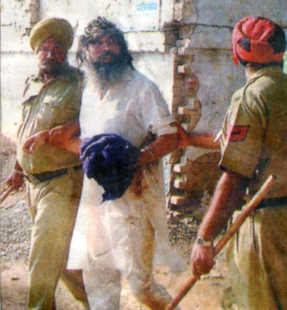 The same GurSikh is being escorted by the police after assaulted by SGPC 'task force'.