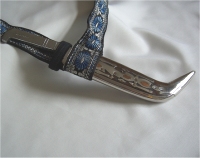 Birmingham UK – United Sikhs has been successful last month in securing the right of care worker Gianroop Singh to wear his Kirpan, a mandatory article of his faith, after he was initially told by his employer that he had to take it off at his workplace.

After taking Amrit (initiation) this year, Gianroop Singh, formerly Linden Barrington, went to work as normal at a care home run by the Birmingham Council. At first he did not encounter any problems in regard to the wearing of any of the Panj Kakaar (five mandatory articles of faith).

However, he was eventually informed by managers that, largely on the grounds of health and safety, he would not be allowed to wear his Kirpan in the course of his employment.

At this point Gianroop Singh contacted United Sikhs, whose legal team took it up as it was a serious breach of his rights, under both national and international law.

"As a new member of the Khalsa in 2011, I am very pleased to say that the employer's issue of wearing a Kirpan in the workplace has been quickly resolved with United Sikhs’ help.”

- Care worker Gian Singh thanking United Sikhs for securing his Kirpan Rights at work.
“We wrote to the Brooke Street Social Care Agency that hired Gianroop Singh and the Birmingham Council which own the care home, citing legal authorities for allowing him to wear his Kirpan. We also drew their attention to the Equality and Human Rights Commission’s guidance on Sikh articles of faith, which confirmed the rights of health workers to wear their kakaar,” said Mejindarpal Kaur, United Sikhs Legal Director.

“A few days later, Gianroop’s employment agency, Brooke Street Social Care, called him for a meeting to give him the good news that he may wear his Kirpan and that the Birmingham Council had issued a statement in support of it,” she added.

“United Sikhs is pleased that good sense prevailed and that the Birmingham Council and the Brooke Street Social Care Agency acknowledged a Sikh’s right to wear a Kirpan at work,” said Mejindarpal Kaur.