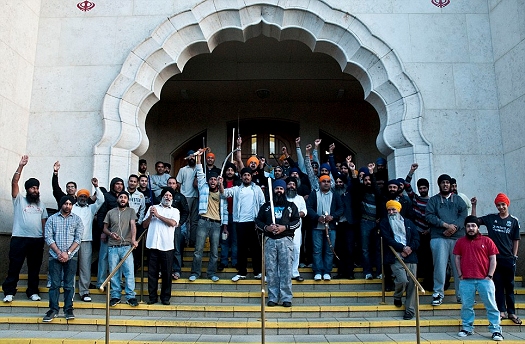 A group of Sikhs standing guard outside Southall Gurdwara Sahib
LONDON, UK - Armed with swords and hockey sticks, over 700 Sikhs took to the streets to protect the Guru Singh Sabha gurdwara in Southall as the police in the UK were stretched to maintain law and order in London.

Local vigilante groups have been formed in various areas in London to protect homes and business establishments that have been vandalised by rioters - mainly of Afro-Caribbean origin - in London over the past four days.

Southall in west London has a large population of Indian origin, which rallied together when, apprehending violence, elders in the gurdwara appealed to the community for help.

Amarjit Singh Klair from nearby Hounslow, who helped rally the men, told the Daily Mail: "We are working along side the police, they're doing what they can but they are stretched. Why shouldn't we defend our homes, businesses and places of worship? This is our area. There's lots of talk about it kicking off here. But we're ready for them."

Groups of Sikh men stood guard at different parts of the town, keeping in touch via their mobiles.

An unnamed man told the paper: "They caught us off guard last night but we still managed to get people together to protect the area.

"We saw them putting on their balaclavas preparing to jump out of three cars but we charged at them and managed to chase them off." 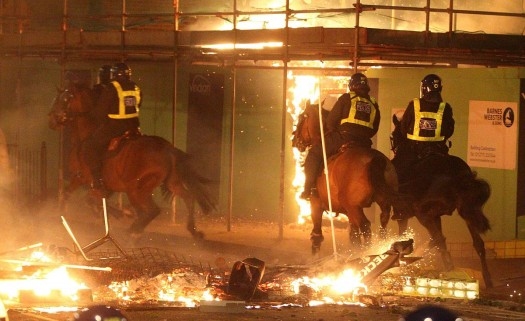 The unrest spread quickly and soon took in its grip cities like Manchester, Salford, Liverpool, Wolverhampton, Nottingham, Leicester and Birmingham.

Violence began in the British capital’s northern district of Tottenham Saturday over the fatal shooting of a man by police.

“The rioting started yesterday (Tuesday) afternoon and shops were looted and cars were set on fire. It continued through the night,” stated Daya Singh, president of Guru Har Rai Gurdwara Sahib, West Bromwich town in the West Midlands, England.

Violence erupted in London over the fatal shooting of a man by police and quickly spread to other cities in Britain. London, which is to stage the Olympic Games, next year saw shops being looted and buildings set afire for four consecutive days. While the British capital became comparatively peaceful Wednesday, unrest gripped other cities.

West Bromwich, with about 200,000 people, was also affected. A number of Sikhs and Hindus call it home.

There was no control on the situation, said Daya Singh who quickly added that as day broke, it became “relatively peaceful”.

Daya Singh said people were put on security duty to protect their gurdwara.

“We have 24 hour security duty at the gurdwara. And not just in our gurdwara, but in all other gurdwaras. About 100 to 200 people are there to protect it,” he said.

Daya Singh is president of the Gurdwara Sri Guru Har Rai Sahib that was established in 1979 by Baba Harbans Singh Domeli Wale following the arrival in Britain from village Domeli in Kapurthala district in India’s Punjab state.