Chandigarh, Punjab (KP) - The right-wing Hindu terrorists who attempted to assault the Babbar Khalsa activist Babbar Jagtar Singh Hawara outside a courthouse received a stinging surprise when the chained lion fought back intrepidly by slapping and thrashing the culprits despite being shackled.

The Hindu terrorists, belonging to the Akhil Bhartiya Hindu Suraksha Samiti attempted to assault Bhai Hawara and Bhai Paramjit Singh Bheora while they were being brought from Tihar Jail to the Chandigrah court premises by the joint team of Delhi Police and Chandigarh Police.

Images of Bhai Hawara outside the Court Complex 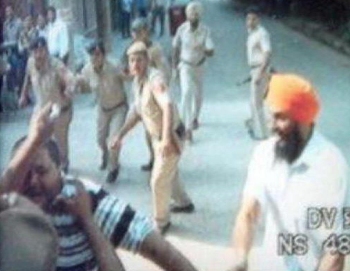 The scuffle occured when Bhai Hawara entered district court complex, and Nishant Sharma tried to attack and shove the Singh. In reaction, Bhai Hawara immediately retaliated and vigorously slapped the Hindu terrorist in return, this can be clearly seen the videos broadcasted by the Indian media.

In defiance, Bhai Hawara and Bheora then openly challenged the Hindu militants by raising pro-Panthic Khalistan slogans outside the court complex.

The police quickly intervened and whisked the culprits away from the scene. The defense counsel for Bhai Hawara and Bhai Bheora questioned the security arrangements made by the government and how the perpetrators were able to enter the secure complex.

Along with Nishant Sharma, the other Hindu militants that were identified as Ramesh Dutt, Ashutosh Sharma, and Manish Sood.

Not surprisingly, the India media reported this event in its usual lopsided manner by headlines such as “Babbar Khalsa Terrorist Attacked” and “Terrorist Slapped while being taken to Court.” It is clear from the videos that in while shackled the brave Babbar immediately defended himself courageously against the attackers by thrashing and slapping into retreat.

It is clear that coward Hindu militants are no match for lions such as Bhai Hawara despite being chained and restrained.

Challenge to the Panth

In the past anti-Panthic groups such as the one run by GOI stooge Maninderjit Bitta have staged protests outside various court venues where Bhai Hawara and Bheora are presented, however this is the first time anyone has attempted to physically attack the Singhs.

It is disturbing to witness anti-Panthic groups openly converging at such venues where the absence of Panthic organizations is clearly now being felt. Merely issuing insignificant press statements is not enough.

Last month several UK based Sikh politicians along with Bakhsish Singh Phagwara of India issued a stern warning to Hindu militant groups who had made threatening statements against Sikh activists. Here is an extract from their press statement declaring that they are fully ready to defend Hawara against any harm :

Now that Bhai Hawara has been openly attacked, it will be interesting to see if those who issued such statements will follow up this challenge with deeds and not mere words and meaningless soundbytes.