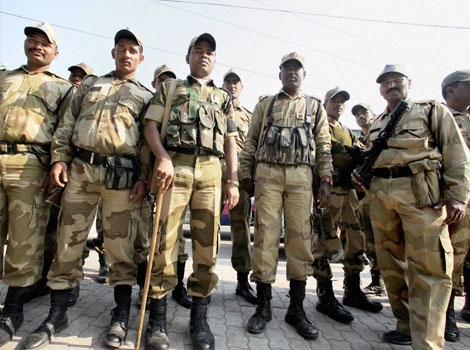 Paramilitary Units Fan Across Punjab
CHANDIGARH, PUNJAB (KP) – Security forces across the north Indian state of Punjab have moved into high-alert phase after the ruling Akali-BJP sounded an alarm that 'hard-liners' might try to disrupt peace during the upcoming protests against the execution order for Balwant Singh Rajoanna.

Although the Punjab Government has declined to carry out the execution on the 31st of March, there is still a pending death warrant against Balwant Singh Rajoanna from the Chandigarh and Haryana Courts.

Earlier, an edict in the form of a "sandesh" was issued from Sri Akal Takht Sahib instructing the Punjab Government along with the Shiromani Gurdwara Parbandhak Committee to take all necessary actions including meeting with the President of India to rescind the death warrant and free Rajoanna from prison.

Incidentally, separate parallel programs including marches, and public strikes have been chalked by various Sikh organizations that were not satisfied with the edict issued by the Jathedars on March 23rd.

According to news reports, about 10,000 Punjab Armed Police (PAP) personnel, along with 15 paramilitary companies, have been deployed in various parts of the state.

The Punjab Police, now headed by the notorious DGP Sumedh Saini, who himself is under investigation for kidnapping and murder, stated that they are leaving no stone unturned to ensure that peace is maintained in the state.