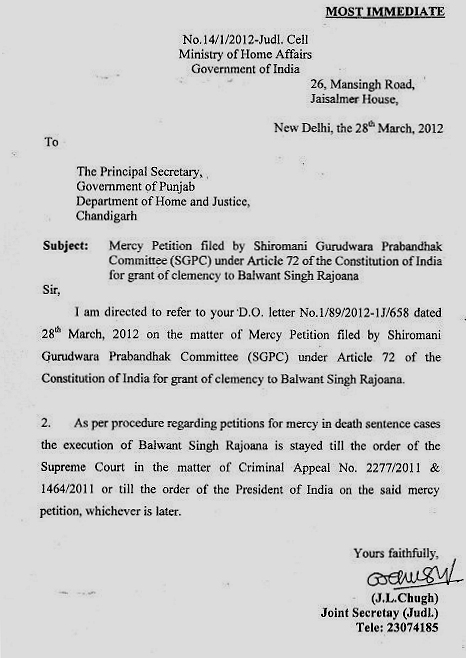 NEW DELHI (KP) - The Indian Ministry of Home Affairs issued a temporary clemency order for Bhai Balwant Singh Rajoana after a mercy petition filed by the Shiromani Gurdwara Parbandhak Committee (SGPC) was submitted to the President of India.

The Shiromani Gurdwara Prabandhak Committee had moved the petition under Article 72 of the Constitution for grant of clemency to Bhai Balwant Singh Rajoana under the directions of an edict issued from Sri Akal Takht Sahib.

A communications order issued by the Indian Home Affairs stated:

"As per procedure regarding petitions for mercy in death sentence cases the execution of Balwant Singh Rajoana is stayed till the order of the Supreme Court in the matter of Criminal Appeal No 2277/2011 and 1464/2011 or till the order of the President of India on the said mercy petition, whichever is later," the home ministry communication said.” 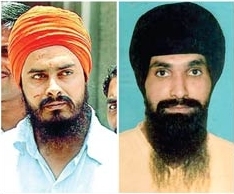 SGPC Calls Hawara the Mastermind, and Rajoana a 'tool'

Both the SGPC and the Punjab government argued that Bhai Balwant Singh Rajoana could not be executed until the appeals filed by the co-accused (Bhai Hawara & Bhai Lakha) are decided by the Supreme court of India.

The SGPC application stated that:

“While Jagtar Singh Hawara (who is stated to be the master mind behind the incident), has now been given the reprieve of life imprisonment, the death sentence of Bhai Balwant Singh Rajoana has been maintained without taking into consideration the relevant evidence which clearly proves that the award of death sentence is erroneous and not warranted in law.”

The information used in the SGPC petition seems to paraphrase the conclusions made by the Government according to official Chandigarh Punjab & Haryana High Court case records (MRC-6/2007), that similarly state:

“The master mind of all this organization …. was accused Jagtar Singh Hawara.”

“Extra judicial confession was made by accused Balwant Singh to Gurpreet Singh PW95, in which he has stated, that he along with his friends from the Babar Khalsa International… and Dilawar Singh assassinated S. Beant Singh.”

“Dilawar Singh and Balwant Singh did not have any personal enmity with S.Beant Singh. They only carried out the dictates of the Babar Khalsa International through Jagtar Singh Hawara.”

According the stay order issued by the India Home Ministry Bhai Rajoanna's fate now clearly rests on the outcome from criminal appeals 2277/2011 and 1464/2011. Litigation for such appeals can take anywhere from several months to several years , depending on the court's schedule.

Protests and Clashes Across Punjab 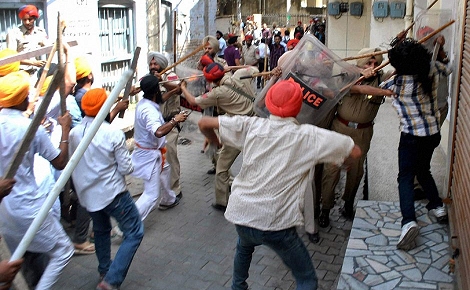 Scene of a Clash in Patiala between Sikh, Right-wing Hindus, and Police

Protests and clashes were reported in Patiala and other regions of Punjab as tensions escalated over the fate of Bhai Rajoana. Skirmishes broke out in several neighborhoods of Patiala and Phagwara where right-wing Hindu groups were counter-protesting against any clemency for Bhai Rajoanna.

More than 60,000 Punjab Police personnel along with 15 paramilitary were deployed across various cities in Punjab. A strike call given by several Sikh organizations including the Dal Khalsa, Khalsa Action Committee, Khalra Mission organisations urged Punjabis to voluntarily shut down their business establishments in protest over the planned execution.

More Arrests and Detentions Across Punjab

Meanwhile, the Punjab Chief Minister Parkash Badal, reiterated that peace and communal harmony would be maintained at all cost and warned all those trying to take advantage of the situation.

Interestingly, Bhai Balwant Singh Rajoana also issued a similar statement appealing for peace and harmony and requested sympathizers not initiate any type of violence or take up an “armed struggle”.

August 31, 1995: Then Punjab Chief Minister Beant Sinh was killed while was stepping out of his office and into his car in high-security state secretariat.

February 19, 1996: Chandigarh district court issued a challan against 12 accused and three absconders in the connection with the case.

October 1, 2010: Rajoana said before the Chandigarh High Court that he would not appeal against his death sentence and he should be hanged immediately.

October 12, 2010: Chandigarh High Court commuted death punishment of Hawara to life imprisonment while Rajoana himself did not file or review petition to challenge death punishment sentenced against him.

March 5, 2012: District Court ruled that Balwant Singh to be hanged on March 31.