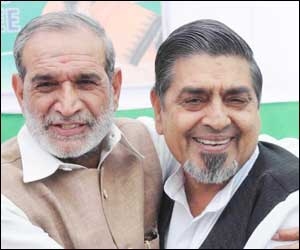 THE GUILTY: Jagdish Tytler and Sajjan Kumar
NEW DELHI - Amid the ongoing row over former Congress MP Jagdish Tytler being included in the official delegation to the Olympics, Shiromani Gurdwara Parbandhak (SGPC) President Avtar Singh Makkar on Sunday said that he would be writing a letter to Prime Minister Dr. Manmohan Singh in protest of the former's inclusion.


All India Sikh Students Federation (AISSF) and Sikhs for Justice also urged a ban holding Tytler and former Punjab KP Gill responsible for the killings of Sikhs from 1984 to 1998.

Makkar said the decision had hurt the sentiments of the Sikh community and the victims of the 1984 riots.

"I believe that this move would agitate sentiments of the Sikh community and the old wounds will be revived. I suggest that such a person (Jagdish Tytler) should not be publicly promoted. On one hand the Congress talks about justice for the Sikh community, we are still awaiting that justice, no one has been convicted and these are all paper talks," Makkar told the media in Ludhiana.

"While on the other hand, they publicly promote those who have cases registered against them, the Sikh community has been fighting such people and victims of those riots have been agitating against them," he added.

"We will lobby with the British Government to deny entry to Tytler and Gill who were expected to participate in the upcoming Olympics like they did recently by refusing to Syrian Chief of Olympics in similar manner." - AISSF

Vice President of Indian Olympic Association (IOA), Tarlochan Singh, however, said that Tytler was not part of the IOA delegation, but was representing the Judo Federation of India, of which he is the President.

"Protest against this decision has today been lodged by the President of the SGPC, which is the apex religious body for the Sikh community, to not send Jagdish Tytler for the London Olympics. Members of the Sikh community have held meeting in London too for the past couple of days, they are protesting that British government should deny admission to Jagdish Tytler in the country and if he comes then the Sikhs will protest," Singh told the media in New Delhi.

"But today the position is that the Indian Olympic delegation will be headed by our interim President, Vijay Kumar Malhotra, with Secretary General of IOA, Randhir Singh, along with two other delegates, B.P. Baishya, President of the Weightlifting Federation and myself. Other than that there is no IOA delegation as such which is to go there. Jagdish Tytler's name does not feature in the IOA delegation," he added.

Malhotra on the other hand said that Tytler was the Chairman of the Volunteer Committee for the 2010 Commonwealth Games, and added that no protest was held opposing his participation in those games.

"Even in the Commonwealth Games in Delhi he was heading the Judo federation, he was the Chairman of the volunteer committee, nobody objected at that time in India and now objections are being made in London," said Malhotra.

The 1984 Sikh Massacre was a pogrom directed against Sikhs in northern India in response to the assassination of Indira Gandhi by her Sikh bodyguards.