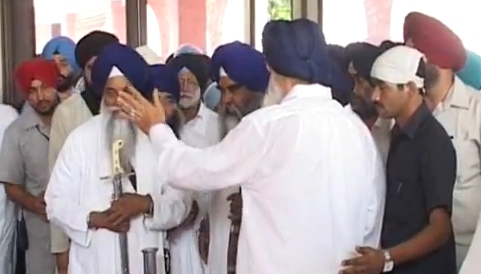 Jathedars of the Panth or Slaves of anti-Sikh politicians?
Amritsar Sahib (KP) – Reacting to the exoneration given to the Radha-Swami cult by the Akal Takht Jathedar in regards to the Beas Gurdwara demolition, Sardar Simranjit Singh Mann stated that Jathedars and the SGPC were slaves of the Badal clan and did not have the ability to make any free independent decisions - further proof that the Panth has forfeited Sri Akal Takht Sahib's Sovereignty.

Simranjit Singh Mann further declared that the Sikh nation would not accept the vindication of the cult by the Jathedars because it was made under political pressure and servitude of the Badals, who themselves were pawns of the Hindu RSS and BJP.

On July 29th, Giani Gurbachan Singh, the SGPC installed Jathedar of Sri Akal Takht Sahib, in a stunning announcement that would test the resolve of Panthic organizations worldwide, cleared the controversial Radha-Swami cult of any wrong doing in connection to the deliberate demolition of a Sikh Gurdwara Sahib in the village of Warraich, Beas.

Furthermore, Giani Gurbachan Singh dubiously warned that any organization that tried up rake up this issue any further would be dealt with in the strictest manner by the Takht, and called the detractors “sharartee ansar” (mischievous trouble-makers) 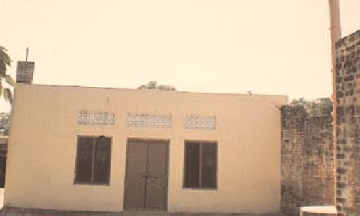 Prior image of the demolished Gurdwara Sahib

The clean-chit given to the Radha-Swami cult has raised further suspicions that the Jathedar is being politically manipulated by the SGPC and his Akali handlers who have a direct stake in the political support provided to them by various dera and cults during elections.

When the news of the Gurdwara’s demolition broke out a couple of weeks ago, the same Giani Gurbachan Singh had avowed that those who were guilty of the desecration would be dealt with in the severest manner. In a strange twist, rumors also began to circulate about the possibility of the Jathedar resigning or being forced to resign due to various “differences” and “controversies”. The rumors were later squashed by SGPC officials.

Jathedar states that demolished building no longer a Gurdwara

Quoting a fact-finding committee’s report, Giani Gurbachan Singh stated that no violation of Sikh maryada had occurred since the demolished Gurdwara did not have parkash of Sri Guru Granth Sahib Ji’s saroop, and there was no regular sangat that congregated at the Gurdwara.

Not long ago, a three-man self-styled fact-finding committee was constituted by the Jathedar himself. It included Akali Dal loyalists Rajinder Mehta, Nivair Johal, and Balwinder Singh. While the representation of Badal loyalists roused the suspicions of many Panthic observers – few were expecting a brazen full-fledged clean-chit from the Jathedar.

"No maryada was violated when the Gurdwara was demolished"

- Giani Gurbachan Singh in defense of the cult's actions

Both the Jathedar and supposed fact-finding committee report failed to mention the circumstances of why there was no longer a saroop of Sri Guru Granth Sahib located at the premises or why the congregation was not being allowed to assemble there.

Panthic organizations have already uncovered nefarious heavy-handed tactics used by the Randha-Swami cult to encroach on public and private lands. They include digging deep ditches, removing burms, and soil, deliberate flooding of farm-land from the nearby the Beas river, and cutting off electricity lines.

Intimidation tactics such as blackmail and violence is routinely used by the cultists against farmers and residents who are not willing sell or give their property over to the cult establishment.

Due to their cozy relationship, the ruling Akali Dal government continues to turn a blind eye towards the injustices perpetuated by these powerful deras and cults, and instead relies on their vote bank during state and municipal elections.

The fact that Sukhbir Badal’s brother-in-law Bikramjit Majithia is married to Geneive Grewal, the niece of the dera chief should have raised a red flag to Panthic organizations that have been agitating for action against the Rasha-Swami cult.

While backroom arrangements were taking place between the Jathedars, the Akalis and the dera cultists, Sikh representatives, such as Simranjit Singh Mann, Bhai Amrik Singh Ajnala, Baljit Singh Daduwal, and others were declaring that they would launch an agitation to re-claim the Gurdwara Sahib from the cultists.

Sardar Mann also stated that no matter how much these Jathedars, SGPC, Sant-Samaj, and various so-called “federations” attempt to defend the reason of the Gurdwara’s demolition, it would never be accepted by the Sikh Nation.

Time will tell whether Sikh organizations will accept or challenge a verdict that was clearly pushed forward by the Badal family through these meek Jathedars in order to protect their Radha-Swami relatives. Accepting such a decision will further prove how much of a stranglehold cults and dera have on the Sikh community and it's not-so-Sovereign Takhts.